Why is the summit in Israel with four Arab countries important? 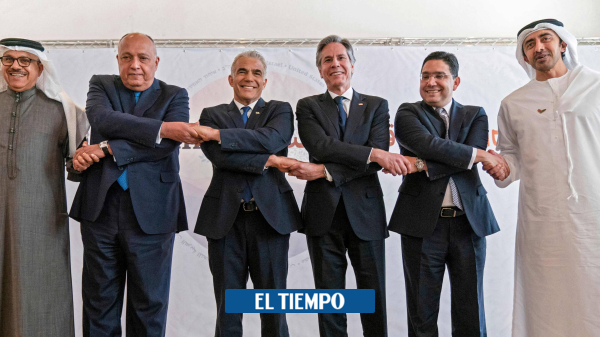 In the town of Sde Boker, in the Negev desert in southern Israel, an unprecedented summit was held Hosted by Israeli Foreign Minister Yair Lapid and his guests, four foreign ministers from moderately Sunni Arab countries –Egypt, United Arab Emirates, Bahrain and Moroccos- as well as the US Secretary of State, Antony Blinken.

(It may interest you: the US, Israel and Arab countries close the summit by confronting Iran)

It is not an exaggeration to speak of a historical event.

“It is the first time that a meeting of this type takes place in which Israel is the host, with the participation of four Arab countries, and in which the United States is a guest, not the one who determines either the agenda or the topics.”, General (retired) Yaakov Amidror, president of the Jerusalem Institute of Strategy and Security, former head of the Investigation Division in the military Intelligence Service, told EL TIEMPO.

“This is part of the clear process of legitimization of Israel by its Arab environment, not only as an integral part of the region but as the one who occupies a leadership position in it,” he stressed.

This summit is the first meeting of its kind, but not the last” and revealed that “we decided to turn the Negev Summit into a permanent forum

A bloody event with deadly results overshadowed the first night of the meeting when an Islamist terrorist attack was recorded in the Israeli city of Hadera.

The attack was publicly condemned by all the participating foreign ministers in a conclusive manner. But in practice, the two events were unrelated.

It should be noted that this summit brought together the first Arab country to sign peace with Israel, Egypt – a treaty that has been 43 years old precisely these days – and the three signatories of the Abraham Accords, the new phase of peace in the region.

And those who were not present – apart from Jordan, due to scheduling problems – were the Palestinians. Although some of its groups condemned the summit, calling it offensive, and vowing revenge, the Palestinian Authority government chose not to comment, presumably so as not to antagonize the United States and Egypt.

The host of the summit, Israeli Foreign Minister Yair Lapid.

But, in addition, the central underlying issue (Iran) was actually less relevant to the Palestinians, although no one forgot to mention them in the speeches with which the summit closed. The six participating foreign ministers spoke about the Palestinian issue and the need to find a peaceful solutionbut it was clear that this ceased to be a condition for normalizing relations with Israel a long time ago.

US Secretary of State Antony Blinken.

Undoubtedly, the great underlying issue that unites Israel and the Arab participants in the summit – in addition to the benefits of economic and technological cooperation – was the Islamic Republic of Iran.

(In other news: Colombia and Israel: two sister nations united by technology)

Even before becoming a nuclear power, Iran is a factor of destabilization in the area, acting through its executing arms in Lebanon, Syria, Iraq, and of course the Gulf, where it attacks the United Arab Emirates and Saudi Arabia, including its nuclear facilities, directly and through the Houthis.

And the apparent imminence of a new nuclear agreement to be signed by Iran and the powers led by the United States, is for everyone a cause for concern.

The former director of Israel’s National Security Council, General (retired) Giora Eiland, told this newspaper that “we usually talk about shared interests with these Arab countries, and there are, but they are not identical situations at all”.

Eiland clarifies that “while Israel has no choice, it is not that if it acts in a pleasant and conciliatory manner with Iran, something will change, the other countries do have an alternative.”

And he goes into detail: “Saudi Arabia, Qatar, Oman, the United Arab Emirates, Bahrain – not all of them participated in the summit – could decide not to clash with Iran, to tell it that they accept its hegemony in the Gulf and that the only thing that interests them is for its economy to function well and to be able to produce and sell oil without problems. And so that this does not happen, Israel makes a great effort and is willing to do things today that it would not have done years ago, such as sharing intelligence and giving some military aid. And it’s good, it’s important.”

The summit was a presentation of a common Israeli-Arab front to Iran. The main thing, for the United States to see. It can be assumed that outside the microphones, not everything was so nice before Blinken and certain hard truths will have been said as well.

The Gulf countries no longer have much confidence in the United States, and it is interesting that the roles have now changed. After decades in which the United States mediated between Israel and the Arabs, it is now Israel that can serve as an intermediary between these Arab countries and Washington.

In Sde Boker, Moroccan Foreign Minister Nasser Bourita called it “the spirit of the Negev.” The Emirati Sheikh Adallah Bin Zayed al-Nayan said he was already anxious to return. Each and every one spoke of peace, new horizons and how much there is to share.

The host, the Israeli Yair Lapid, assured that “this summit is the first meeting of its kind, but not the last” and revealed that “we decided to turn the Negev Summit into a permanent forum.”

JANA BERIS
FOR THE TIME
JERUSALEM