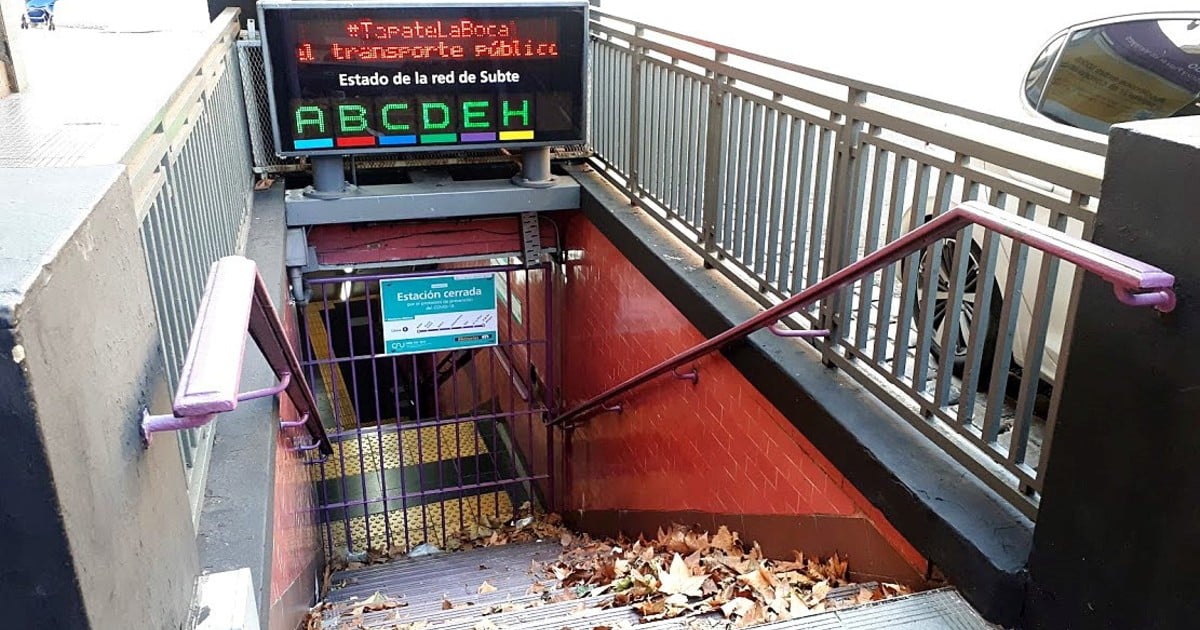 Although almost all the activities in the City were opening, 35 of the 90 subway stations remain closed. And for the moment, according to the Buenos Aires government, there are no plans to open them. Not even when classes come back on February 17.

Behind this decision is the need to preserve the health security of the subway, a means of transport that is more closed than others and which, before the pandemic, used to be crowded. All of these are factors that increase the risk of coronavirus infections.

Keeping stations closed is a strategy for fewer people traveling. “We understand that the subway has to be used for long trips, not for short trips. With that, we get people to walk more and not take the subway for two or three stations. For short trips, the best thing is the transfers to the open air with distance “, they explain in the Secretary of Transportation and Public Works of the City.

From that Secretariat they affirm that for now no plans to reopen more stations. In Subterráneos de Buenos Aires they say the same thing, although they admit that the issue is being analyzed.

What are the 35 stations not enabled? On line A, the formations do not stop at Plaza de Mayo, Piedras, Saénz Peña, Pasco, Alberti, Loria, Rio de Janeiro, Puán and Carabobo. In B, in Florida, Uruguay, Pasteur, Carlos Gardel, Tronador and Echeverría. In the C, in San Martín, Lavalle, Moreno and San Juan.

On line D, Agüero, Scalabrini Ortiz and José Hernández do not stop at Courts. On the E, in Catalinas, Belgrano, San José, Pichincha, Urquiza, José María Moreno, Medalla Milagrosa and Varela. And in the H, in Las Heras, Córdoba, Venezuela and Inclán.

With this scheme, this Friday in the subway 165 thousand people traveled, 15% of the usual volume before quarantine. Before the restrictions, between the 6 lines and the Premetro they carried 1,074,000 passengers.

So far, the subway is still reserved for essential workers. The Unique Enabling Circulation Certificate (CUHC) specifies whether the carrier is authorized to use public transport. But the controls were weakened.

The general secretary of the Gremial Association of Subway and Premetro Workers (AGTSyP), Roberto Pianelli, warned when the return to classes was announced: “If you allow students to travel by subway, the subway for essentials is over. We know the demand for the subway. If you enable it, it is packed. Today is not full because it is only for essentials“, stressed the leader of the Metrodelegates.

“I understand that the government’s policy has been to have stations closed to discourage the use of public transportation,” says the AGTSyP press secretary, Enrique Rosito. And transportation is only for essential workers depending on the number of trains. , the number of personnel and the passenger transport capacity there is. AND should be kept that way. We must encourage that public transport is exclusively for those we need in the first line of battle against Covid at the gates of the second wave. “

Controls to passengers at the entrance to Constitución station on line C of the subway. Photo Luciano Thieberger

Rosito says that it is key that there are controls to verify that only those who are authorized travel. And with regard to going back to school, he warns: “If we enable more stations, if we put thousands of boys and girls and teaching and non-teaching staff to travel, we are entering a state of normality. And in a state of normality the public transport is the main vector of contagion of Covid“.

The closure of subway stations was implemented in March 2020 as an extraordinary measure given the advance of the pandemic. At first, the formations only stopped at the headwaters and in some transshipment centers. In April the measure was relaxed and they began to stop at 50 stations. And in December, five more were enabled and 55 stations were open.

The B of Bárcenas close to the PP

“70% of the last epidemic outbreaks have started with deforestation”