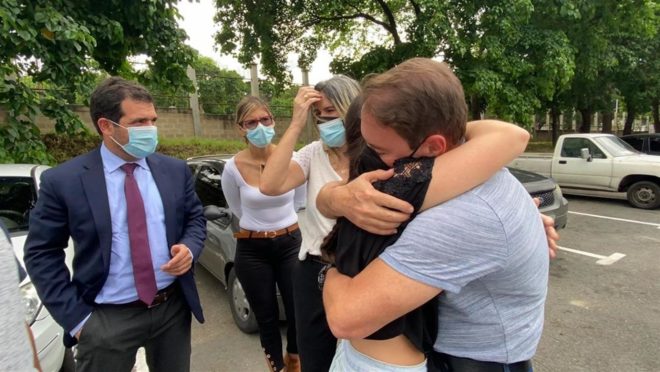 Former Venezuelan Air Force Lieutenant Colonel Ruperto Sánchez, considered a political prisoner by several human rights organizations, was finally released on Thursday (17), after spending seven years in prison, accused of a military rebellion. The release was announced by the Venezuelan NGO Foro Penal, which for nearly 20 years has helped people who are arbitrarily detained by the Chavez dictatorship.

The release of the soldier, who also has Spanish nationality, should, according to the organization, to have occurred in July of last year, but it only materialized after pressure and accusations. When he was released, he was finally able to embrace his wife and daughter.

Stories like Sánchez’s, unfortunately, have become commonplace in Nicolás Maduro’s Venezuela. According to the NGO Foro Penal, there are currently 301 political prisoners in the country. However, since 2014, the dictatorship has arbitrarily detained 15,743 people for political reasons. Alfredo Romero, director of the NGO, explained to People’s Gazette that these arrests need to be constantly monitored and updated because of the “revolving door” effect of political prisons in the country.

release one, hold another

“The number of political prisoners in a week may be the same as the week before, but it’s different people who are being arrested and released,” said Romero. This coming and going is intended to intimidate the population, in addition to allowing the regime to always use political prisoners as “a bargaining chip” to bargain with the opposition and international actors.

“The arrests are always taking place, almost weekly, to maintain this fluidity of intimidation. But as some people are released, others are arrested. Last week, for example, Carlos Roja, who had been in prison for almost four years, was released, but other people were also arrested for different reasons”, he mentioned.

For Romero, part of the opposition also exploits the situation of political prisoners to gain advantages in the same game as Nicolás Maduro. Last year, for example, opponent Henrique Capriles announced the release of more than 100 political prisoners – which in fact were 50, according to Romero – after negotiating with the dictator before the parliamentary elections.

“Specific moments are used to show that they are releasing political prisoners and thus obtain some political benefits – whether from the government side, or from the opposition side. The government arrests people to use later as bargaining chips to ease international pressure, which would be the case today, or to ease national pressure. And on the opposition side, they sit down to negotiate [com o regime] and they include political prisoners who do not know and even make mistakes in the lists just to obtain political benefits and to be able to be those who sit down with the government in negotiations or dialogue processes”.

Who are the political prisoners in Venezuela

According to Romero, there are two opposition political leaders currently detained: journalist Roland Carreño, linked to the Voluntad Popular party, and Gilberto Sojo, also a leader of the same party. The vast majority of political prisoners in Venezuela are citizens who do not belong to any party, but who have criticized the Venezuelan dictatorship at some point: there are indigenous people in prison, unionists in the oil industry and education, soldiers accused of rebellion, residents who participated in protests against the regime. The objective of the Chavez government in arresting these people, who, in their majority, are not linked to opposition political parties, is to intimidate the population in order to avoid protests, reducing the chances of an opposition reaction.

There are still people who are arrested so that you can find wanted information or pressure wanted people to surrender. “There is the case of a woman named Maria Auxiliadora Delgado Tabosky, who is the sister of Osman Delgado Tabosky, who is wanted for allegedly taking part in a murder attempt against President Nicolás Maduro. They detained her and her husband, they have been in prison for almost three years, without a trial, without a trial,” said Romero.

Precarious conditions and right of defense

He also said that of the more than 15,000 people who were arbitrarily arrested in Venezuela over the past seven years, less than 1% have never been convicted. Many were imprisoned for long periods, up to seven years, without a judicial process, and when they are released, in the same way, there are no processes, because their release is nothing more than a political decision.

“There is a case, for example, of Antonio Garbi, detained in 2014 for participating in a protest and accused of a murder that allegedly took place during the protests. He didn’t commit the murder and he’s been in prison for seven years and the process hasn’t even started,” said the director of the Criminal Court, adding that when the courts do not initiate proceedings, political prisoners have no right to defense.

“Of the current 301 political prisoners, just over 10% have been convicted. All the others were not convicted and the vast majority did not even start a judicial process”, he informed.

The situation became even worse during the pandemic, as the health crisis was used as a justification for barring lawyers access to prisoners. Admission of lawyers and family members to detention centers was closed and this delayed the possibility of the right to defense.

Prison conditions are also a major concern for human rights organizations. According to Romero, they do not meet the basic conditions for keeping people in seclusion. “Many are sick, in a serious health situation, without medical attention”.

In an interview with the spanish newspaper ABC, the wife of Ruperto Sanchez, the soldier released this week, Kerling Rodríguez, said her husband was sent to a “punishment cell” in the Ramo Verde penitentiary with 20 other inmates, where they spent 17 days in miserable conditions.

“It was inhumane. There was a latrine for all of them. The feces overflowed. They had to bathe in that cell, and I imagine they even had to eat there too (…) Currently in Ramo Verde there are prisoners sleeping on the floor and sanitation conditions have worsened in recent years”, said the wife in early June.

Finally, Romero warned that arrests continue and that international pressure is important to obtain the release of political prisoners, just as it was in the case of Sánchez’s release.