When your only pantry is the garden 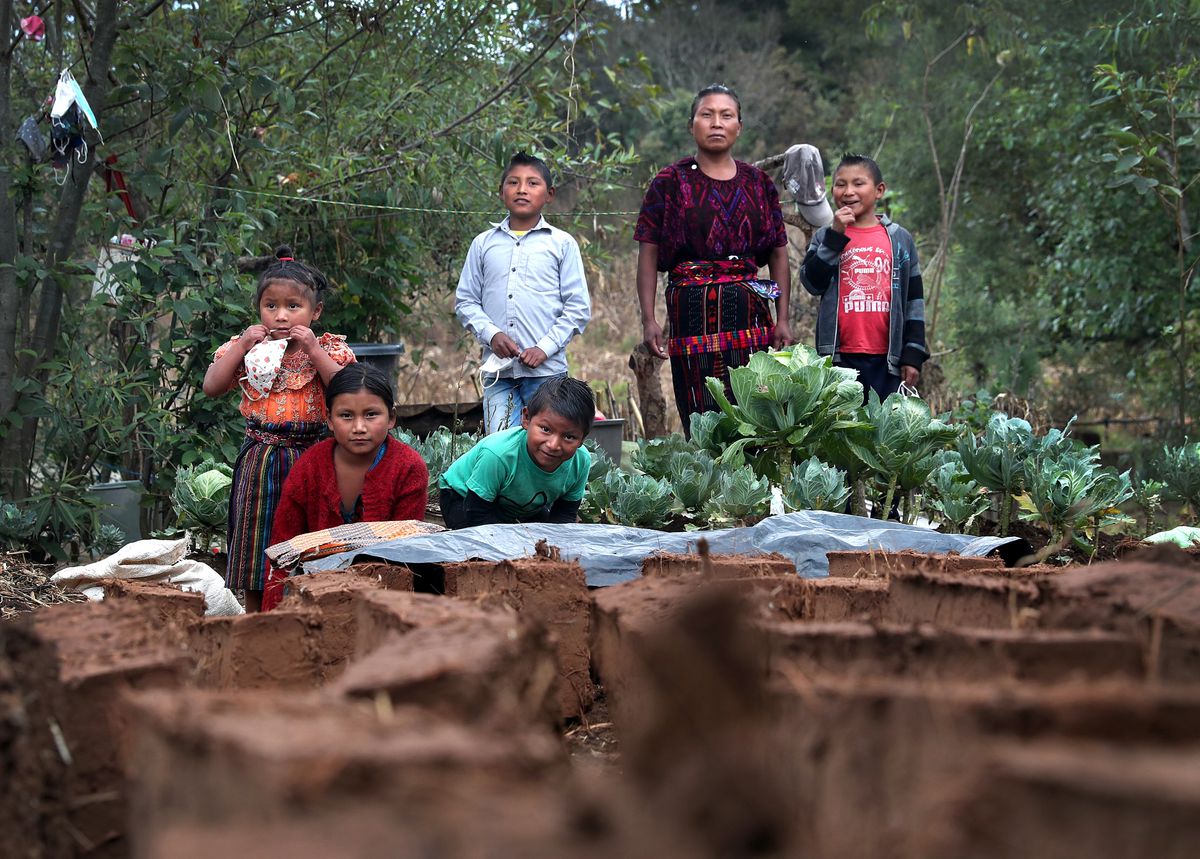 There were a few months in which Doña Marta Mejía González got used to staying up when she heard the rain. His family needed the water for the harvest so much that sometimes he even thought it was an illusion of his and hesitated for a few seconds to run out of bed. But the mere possibility that it was true activated her. She would rush into the kitchen and grab all the cauldrons and pots she found along the way. One by one, he placed them around his humble adobe and reed house and then waited for them to fill under the porch with a little more hope.

In this house in the Los Cerritos I community in the municipality of Chiché, in the Guatemalan department of Quiché, the seven members of the Mejía family survive thanks to supplying agriculture. A small garden fills the stomachs of four children and has served as a pantry since the virus stopped everything; to the bricklaying job of Dona Marta’s husband and the sale of his textiles in the town market. “We are left with nothing. We eat thanks to what we plant ”, he tells from the same patio that today receives overwhelming heat. It is a very dry area and for just over a year the rain has been synonymous with food.

I just wondered: what am I going to feed my children if I don’t have money to buy yarns and weave or for water to irrigate?

This land that surrounds the Mejía house was infertile a year ago. “I was very distressed,” acknowledges Doña Marta. “I was just wondering: what am I going to feed my children if I don’t have money to buy yarns and weave or for water to irrigate?” The soil was arid and hard until she set out to turn it into a farmland. So he watered it and stirred it several times with ash and brush (dry leaves). Then he planted the seeds that were donated to them from the NGO Educo and waited patiently. As there is no electricity in this small home, nor does she have a mobile phone, the neighbor often came to repeat the training she had received. in the entity’s project to contribute to the eradication of malnutrition in the department of Quiché.

This program, which also features with school gardens, directly benefits 116 families and more than 3,000 people indirectly in ten different communities. Although the idea of ​​the initiative was to provide training and offer them an option to sell their vegetables in the markets, the pandemic diverted the route. Silvia Elizabeth Saquic Conoz, a home educator of the entity, knows that there is still much to do, but she is happy to be welcomed in the villages: “I feel that thanks to this, many families ate something more nutritious and varied.” The Mejías are already in their fourth harvest.

Cabbage, carrot, radish, lettuce, chard, beet and coriander. Those have been the provisions for more than a year of the Mejía family

“We have encountered many difficulties when it comes to transferring agricultural training workshops to a non-face-to-face format,” explains Saquic. “We had to make videos or call the beneficiaries one by one by phone, but we succeeded. And also thanks to neighbors like Doña Marta’s, who did have a cell phone and passed the message on to her ”. The entire community struggled because they knew how necessary it was. Hunger was not the same for everyone.

Guatemala is the Latin American country with the highest rate of chronic malnutrition. One in two children is stunted due to hunger, according to data from Unicef. Ileana Cofiño, the organization’s national head of education, criticizes these unfortunate figures, but knows that the effort to get school lunches even during the pandemic, has been key. And not only for children, but also for parents. “It has been a success that at least those packages kept arriving during all these months. They all ate ”, he says. This family has not been an exception. They took advantage of every bean. “It was a help, but it was not enough. Luckily we managed to get this done ”, she says kneeling in front of the radishes ready to be picked.

The pride that is drawn on his face is mixed with fatigue. It has not been easy. And the lack of rain has not helped anything. “Here we have to go to the well to fetch water because we don’t have any at home. And a day, it takes us like three hours, ”he explains in Quiché, his mother tongue. Their daughter, Kieni Patricia, 20, looks for the little jugs they wear every morning and carry on their heads. “I know that with a large one we would save trips, but they become very heavy. And they are still very young, ”she explains, rocking her three-month-old baby without taking her eyes off the children running between the rows of the garden. They are already made to it and they know where to step and where not. “We also help my mother,” says one of them. “We already know when they are to eat.”

Cabbage, carrot, radish, lettuce, chard, beet and coriander. Those have been the provisions for over a year. Sometimes, they would use some of the eggs from their four hens and, on the most special days, they would add some pork rinds or chicken. But the daily menu of this family has been corn tortillas and endless combinations between these seven ingredients. Sometimes with beets. Others with carrot and coriander. And start over. And, of course, everything is used: “Sometimes we made broth with carrot or radish leaves.”

For Saquic, giving the workshops during the pandemic has been a challenge. Educo started the project in March of last year, just a few days before the world came to a standstill. Although he feels proud of all the families that the garden has supported, he is left with a bitter taste when he thinks of the hard-to-reach communities that they could not reach and the lack of a more pleasant and individualized treatment. “We have looked for all possible alternatives, but there is a great need,” he says.

In a house similar to those of the Mejía, half an hour’s walk through dry cornfields and cracked soil, is the home of the Cac Yat; for Sabina, the matriarch, it is her great pride. Her countenance is that of a courageous mother who does not give up. Before the pandemic, he was washing clothes for 40 quetzals a barrel. Just over four euros. Her husband cut sugarcane and used to return home with 60 quetzals on a good day. Another six euros. “With that we were pulling,” he says. Her youngest daughter hides between the folds of her skirt and listens very carefully. When the pandemic broke out, both jobs ended and hunger squeezed a family without resources and hardly any savings. But they did not stop.

Cac decided to start building adobe blocks to sell to the few neighbors in the area and he devoted himself fully to growing his farm. Today it has up to two small wells of its own and several rows of seeding on three levels. “I know I’m lucky, not everyone has water so close and free,” she acknowledges as she pulls on the rope that makes a barrel full of fresh water appear.

In the middle of both houses, a large white tent attracts attention. It is a community garden that Educo has also donated, but which is managed and coordinated by the neighbors themselves. Doña Juana donated a space on her plot and is also in charge of the harvest. He wants to see how the chili peppers they planted are growing recently, so he carefully unzips the zipper that separates the greenhouse from his house and treads carefully. Right now they only have tomatoes and chili peppers. “Soon we will plant strawberries and other fruits,” she says excitedly. The procedure is as new as it is easy: a dozen volunteers were encouraged to take it and they water and take care of the macro-tunnel in turns. Like this one, there are nine others in different communities.

They are the ones who sow and those who reap. “Each one is in charge of bringing water, fertilizer and preparations periodically. It is an experience so that they can learn from these more delicate crops ”, explains Saquic. This May is the next installment and it is quite an emotion. “I hope this will continue and that all our families feed from here,” says Doña Juana. The one who is sure to do it is the child who is hanging from his shoulder among colorful fabrics. The wish of this young mother is that she does not grow up in the damn half of the hunger statistics.