When divorce breaks out on the threshold of old age 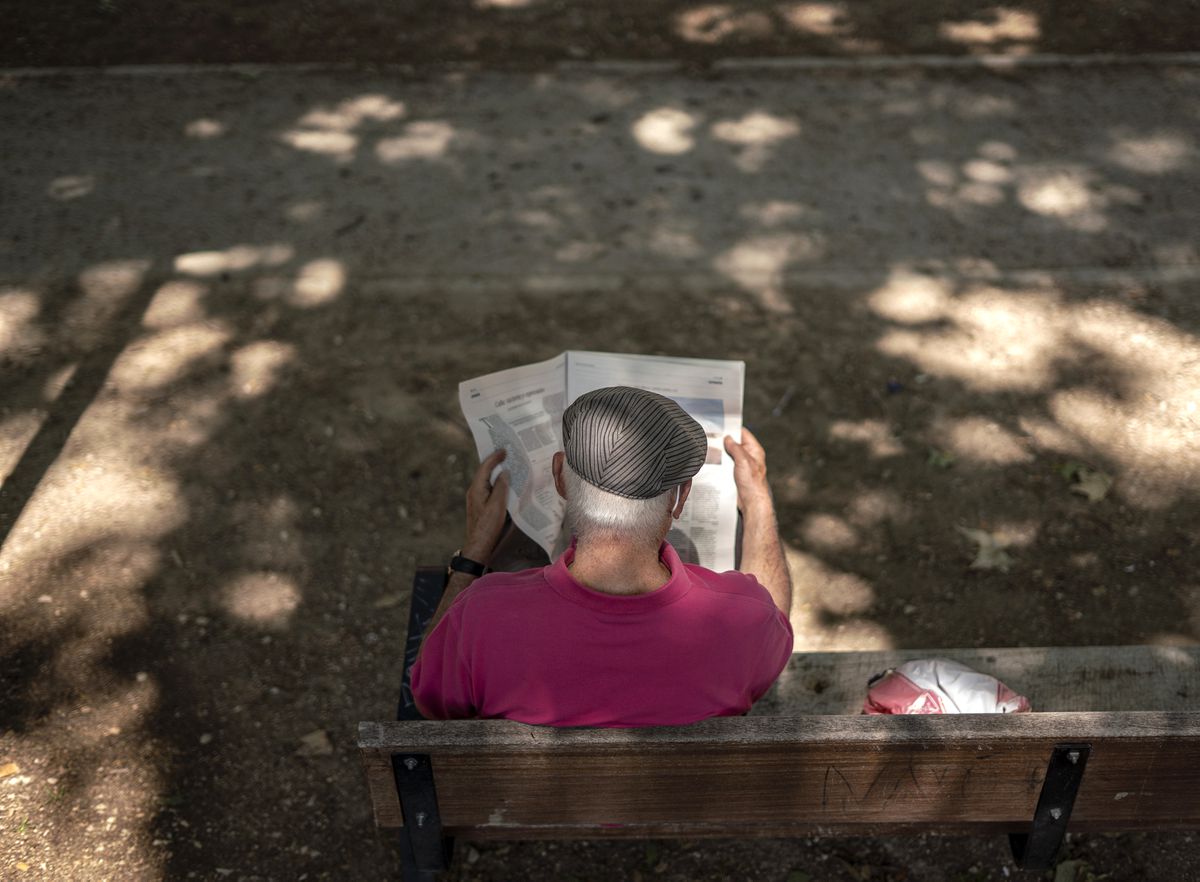 Esther and María do not know each other at all, but they are more or less the same age, they are both retired, they dedicated themselves to a job related to culture, they enjoy a comfortable economic situation and they have just divorced. The first discovered, let us say accidentally, that the man with whom she had shared her life for almost half a century led a parallel life. The second also decided to take the step for a matter of infidelity, but in this case with herself:

“For years I felt that I was not being true to myself,” explains María on a terrace on the outskirts of Madrid. I had been thinking about a phrase that was repeated in my head for a long time: this is not what it has to be, this is not what it has to be … He wanted to be by my side at all costs, but I did not It seemed honest, not only for me, to continue with a person with whom I was not happy.

More than a thousand people over 70 years of age divorce each year in Spain. It is not a novelty and they do not represent the predominant age group in the separations, they are no longer a scandal nor do they feel the threat of eternal fire, but they continue to awaken in their environment a series of reactions of surprise, disbelief and even rejection: By now? Have you thought about it? What need do you have when what you need now is tranquility …?

Trinidad Bernal, doctor in Psychology and founder of the Atyme Foundation, has spent 30 years mediating between couples who, unilaterally or by mutual agreement, face a separation. “Almost always you try to find an explanation for the breakup,” he explains, “you try to attribute it to a specific cause, a case of infidelity or abuse, but the great experience we have tells us that in most cases it does not have to do with none of that, not even infidelity. Those who think that people separate by fashions or on a whim are also very wrong. It is generally a decision that has been maturing for years. Years in which one is mumbling his story, relying on things that happen in the couple to say to himself: do you see how I have to separate? And that is why the story that this person lives is so different from that of his partner, that one day he hears with amazement: ‘We are going to separate’.

Trinidad Bernal and Francisco Iglesias, also a psychologist at Atyme, are still struck by one aspect in particular: “Sometimes you listen to the story of both separately and you ask yourself: but have they lived together for a lifetime? They are the same couple and they are telling you absolutely different stories, and you know it is them because the names of the children and the places where they go on vacation coincide, because otherwise you would think that you had the wrong file ”.

This is the case of Esther and her lifelong ex-husband, let’s call him Victor. All the names in this report, except those of the mediators and the secretary of an association of separated people in Madrid, have been changed due to the desire of the prot agonists not to harm their relatives with their testimonies. But here, unlike in the movies, any resemblance to reality is no coincidence. When divorce explodes on the threshold of old age, the feeling of emptiness, vertigo and uncertainty is not comparable to that of middle-aged couples.

“My old age has robbed me.”

Esther has all the fatigue gathered on her face, and even so she accompanies her sentences with a smile. “My psychologist tells me that three steamrollers have run over me: separation, cancer, pandemic… I have spent months crying, and I am not a crybaby. Now I’m better, I even want to see all this as a new opportunity. Maybe it helps me that it is not the first time that I have to reinvent myself. I already had to do it when I was young, when I imposed myself on my parents’ desire, which was not for me to study ”.

Esther tells the story of what happened. They were watching a movie together. He was chatting on his phone. She got up to do something and when she left the room she touched Victor’s computer, the screen lit up and revealed the messages he was sending and receiving on his mobile. That was the thread, with names, with data, with dates, that Esther was pulling until she discovered that all her life she had been with a man she hardly knew anything about. “I asked him why he hadn’t told me and he replied that because then I would have separated. And he added, by way of mitigation: but you have lived well … Yes, perhaps, but I did not want to live as a deceived woman. That was not my decision ”.

Victor arrives in advance of the appointment. Tell your story in succession, with hardly any questions required. He says that the day-to-day life of his marriage with Esther was good: “There was still love, but the passion of other times had logically faded and we collided in everyday things.” Her version is that both he and she were open-minded people, who had been aware that other people had passed through their lives and that, if it had not been for that explicit message that she read on the network, they would surely have remained together: “I could have told him it was a specific thing, to try to get out of trouble with the least possible damage, but he asked me and I told him. Everything”. Esther and Víctor discovered, each on their own, that the web they had woven together of family, comforts and friends was collapsing with the unexpected violence of an earthquake. The economic issue was resolved before that of the shared story. “He is in a money laundering operation”, accuses Esther, “his version is that love ended, it was a mutually agreed separation and then he met someone else. And that’s not true”.

Toñi Flores, secretary of the mixed association of separated, divorced and widowers of Madrid, responds with self-confidence to the question of why relationships are broken at advanced ages: “Some because they have been swallowing cinchona for many years and when their children fly, they separate . Others, because they discover infidelities, some very long, of 20 years and more, even with the children of the other couples. And there is still another group that would also like to separate but they are still together because they have no choice, usually for financial reasons, but there are also cases of illness ”. One of his associates, sitting next to him in a cafeteria near the Matadero cultural center, in Madrid, points to a ghost that scares many of those who, already aged 70 or over, begin to consider a future for the first time without partner:

– Loneliness, the worst thing is loneliness. Him and now what do I do? When I was left alone, I would go to the Gran Vía, look at the people and see everyone paired up except me. Then, over time, you realize that no, that there were also lonely people on the streets, but at first the world fell on me. Saturday afternoons are killers. Loneliness is very bad. It is outrageous to be alone, also because of social pressure. My people are in a pit and the pit is also the people. What will they say … Especially for women. Look at her, where will she be so composed, how soon she has forgotten …

Trinidad Bernal, the founder of Atyme, explains that, indeed, some of the people who separate so old “did not do so at the time” due to social and even religious pressure: “Separation was highly stigmatized in this country. I remember that in the early years the moment of saying it in the family was lived with real dread. Even many people did it and did not say it at work or anywhere so that it would not transcend. Now many decide to take a long thought out step because the social weight is less. You stay with your own weight, but you do not also drag the comments of your family saying ‘what are you going to do, have you thought about it? You’re crazy, you’re going to break up your family, what’s going to become of your children? ‘ It was tremendous… ”.

The situation has radically changed. Trinidad Bernal and Francisco Iglesias say that, now without so much social weight behind them and with the issue of children resolved, a critical moment in which separations occur is that of retirement: “There are people who are used to spending the days away from work and when work life is over, they realize that they do not want to share their life with a person with whom they no longer share hobbies or clash over issues that may seem insignificant to others. The man who thought that with retirement would come travel and realizes that she does not want to separate from her grandchildren. Or one who came in and said, ‘I love this neat table. I can’t stand the disorder in my house. ‘ And the one with the chicken wings. He told his wife that he was separating because he insisted on putting one more chicken wing on his plate. He said, ‘I’m breaking up!’ And she, of course, was surprised. But that was for him the straw that broke the camel’s back, his way of bringing out that he couldn’t take it anymore. There are also women who decide to end the relationship after overcoming a serious illness, breast cancer, for example. Or the death of a very dear family member. They realize that the man next to them did not know or could not or did not want to give them love and company. And if someone does not know how to answer you at those times, your vision of that person changes radically and you decide to separate “.

María, sitting on her terrace on the outskirts of Madrid, utters a lapidary phrase: “I had a joy outside my home, at my work, that I did not have when I returned.” And he adds: “My heart had already decided that I had to leave home a couple of years before I left. I took the step when I had it very clear and when I decided that I wanted to be an example for my children. They are older, but I wanted to show you that you have to fight to find your balance and your place in life. You don’t have to settle for a life that is not okay. But it was also important for me to leave him when I felt that I was ready to face it ”.

“And what did you feel when you left?”

“It was like dropping a backpack full of rocks.

The last question for Trinidad Bernal and Francisco Iglesias, who have been building bridges for many years in a country so fond of disagreements, is what happens after the separation, are there happy separations?

“In the long term, yes.” And sometimes the one who hadn’t asked says, well, it wasn’t the end of the world. Other times, on the other hand, whoever decided it recognizes that the separation was not the solution to all their ills.