What you need to know before visiting the Alhambra 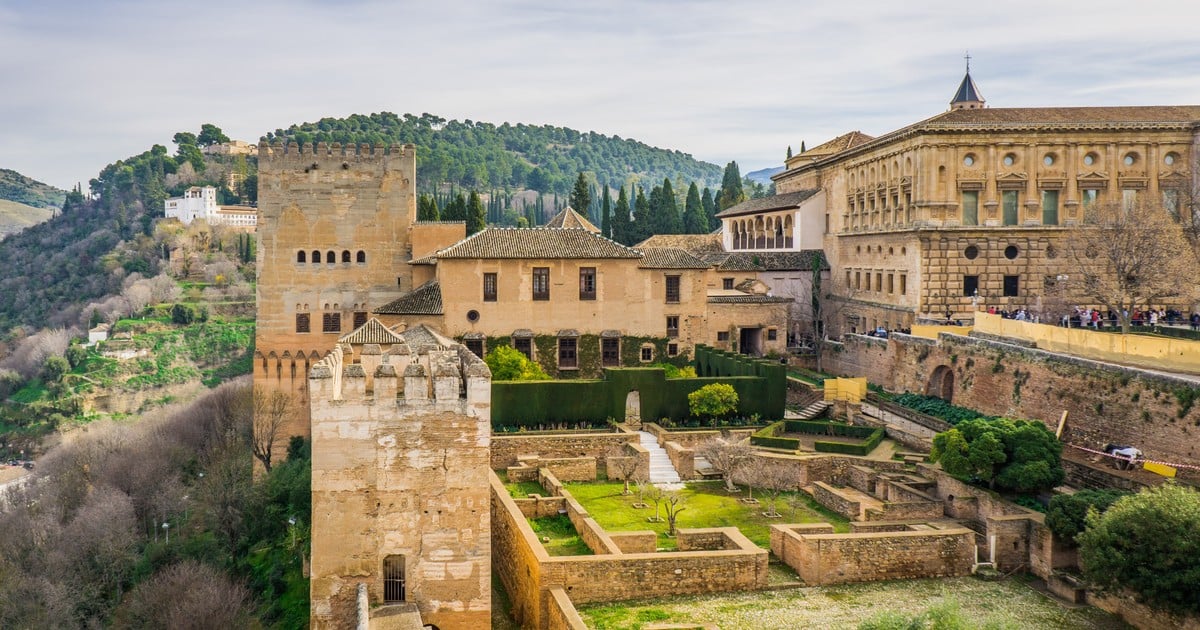 The Alhambra is not easy. It has always resisted. When you see it for the first time at the top of Sabika Hill, red, majestic, seductive, it seems impossible that such a magical place exists.

About 100 meters high above the city of grenade, Spain, on the banks of the Darro River, protected by mountains and surrounded by forest, this imposing castle construction began in 1238 so that no one could conquer it.

In recent years, however, it became one of the most visited monuments in the world with around 3.5 million people a year.

They even say that a large part of those visitors, irresistibly captivated, repeat the experience over and over again.

And it is that when you manage to climb the Alhambra, penetrate its apparent rudeness and discover for the first time the endless corners and the delicate decoration that hides its interior, it is already very difficult to forget that you can always return.

Climb on foot through the forest

The Alhambra is 740 meters long and 220 wide. Has the shape of a ship whose bow points to the city of Granada. It is surrounded by 1730 meters Wall that are closed by 4 large exterior doors and other interior ones.

There are several ways to access one of these doors. The simplest thing is to take a taxi or a bus from the center of the city.

But for those who like to walk and immerse themselves in the surroundings of this palace, it is best to go up through the forest below.

The Puerta de las Granadas, in the southern part, is crowned by three large stone pomegranates, a symbol of the city. It is the most common access.

From there there is a very pleasant first walk along the Gomérez slope, among hazelnut trees, plane trees, hackberries, horse chestnut trees, elm trees, all dotted with myrtle hedges.

There are two other possible entrances: the slope of the King Chico, in the northern part, from the Paseo de los Tristes; and the route that goes from the old Jewish quarter and ascends the Realejo slope, which is a steep and rough street, but with splendid views.

It all started with a fort in the 13th century (the first parts date from the 9th century). Mohamed I ordered to raise it and it became one of the first constructions of the Nasrid Alhambra. The seed of strength.

The idea of ​​the Alcazaba was that it was very visible at the top of the mountain to house the troops and thus drive away the enemies.

Then, despite the countless assaults and some earthquakes that suffered, grew until today it is the only Islamic palatial city that has remained practically intact. A miracle. Surely her beauty saved her.

There is a thirty towers from east to west of the Alhambra. At the eastern end, the highest of all reigns: the Torre de la Vela, whose function was to defend the aqueduct that brought the water from the Darro River.

In the 16th century it was affected by an earthquake and was reformed in the 19th century, adding a campaign that was sounded at dawn by the Christians to warn the farmers to water the gardens of the city.

The views of the Albaicín neighborhood, the Granada plain, the rest of the surrounding towns and Sierra Nevada from the top are an essential sight.

An example of architectural respect

They are already 800 years dominating the city of Granada. And since then a lot has happened.

The Alhambra maintains its original façade dating from 1238. Photo Shutterstock.

Among them, the culmination of the Reconquest of the Catholic Monarchs in 1492. And on that occasion, contrary to what happened with many other buildings and monuments, the original architecture was respected.

And it was his grandson, Emperor Carlos V, who was so in love with the Alhambra that he decided to build a palace inside. Imposing his style and personality, but yes, without destroying any of the existing Nasrid palaces.

This palace is one of the must-sees. Facing the Alcazaba, with its large circular central courtyard on a square plan (this Mannerist arrangement is unprecedented in Renaissance architecture) and its Doric and Ionic columns, it gives you the feeling of being in ancient Rome.

In Renaissance architecture, a return to proportion and symmetry was defended. It also houses the Alhambra museum, where numerous pieces of Nasrid art are exhibited.

There is something nice inside the Alhambra that makes you feel very comfortable. Makes you want to return. It happens as with many temples. It is something spiritual. When you immerse yourself between its walls from the bustling city of Granada, everything becomes calm and quiet. The cause, in part, is the thermal sensation.

Today everyone talks about the benefits and importance of sustainability and energy intelligence in buildings in the future, and yet the Alhambra, a construction from the Middle Ages, has always been an example of these qualities.

It was shown that there are certain interior zones that maintain stable thermal comfort at different times of the year, be it hot summer or freezing winter.

And apparently, the reasons are several: how the courtyard architecture, a fundamental element for the generation and control of the climate; the ornamental elements of the Court of the Lions or of the Hall of the Two Sisters, whose air as it passes through these elements is slowed, cooled and continues on its way, thus maintaining a microclimatic function (it acts as a natural air conditioner).

And it also happens with the marble columns, which act as energy stores, which they release later when the temperature demands it.

A rice with a view of the Red City

Broad beans with ham, the soak, the Sacromonte omelette or the salaillas. And it is that when it comes to eating, Granada will not leave you indifferent.

The Granada gastronomy it is delicious. And it is already known that a tour of the Alhambra is demanding and one should think about stopping and recharging energy from time to time.

You have to choose a good restaurant. And since we are in Alhambra mode, what better than a place with good views of this fabulous palatine city.

In El Trillo (callejón del Aljibe de Trillo, 3) you have to ask for a rice yes or yes. Rice with squid, with octopus and turbot or black, it doesn’t matter, they all embroider them.

But one of the key points of its success are the splendid views that overlook the majestic Red City. Of course, you have to choose the garden terrace with fountains at the top. It is one of the most elegant establishments in the city and one of the best valued in the networks.

In addition, it is the right place after taking a digestive walk through the Albaicín.

The tiles of the hammam

One of the most interesting and striking aspects of the rooms that the Alhambra contains are its panels of tiles and tiling. They are works of art in every sense of the word. There are even routes created especially to contemplate this curious technique.

Among other artistic pieces, the tiling of the Mexuar room, the Throne room or the El Partal gardens stand out. Its geometric shapes and the almost infinite diversity of sizes, colors – blue, green, brown, purple, ocher … – was the symbolic way they had to approach God.

Image of the first visitors to the Alhambra in July 2020, after the closure by Covid-19. Photo EFE / Miguel Ángel Molina.

Between the Comares and the Leones palaces, you will find one of the most unique spaces of the Alhambra: the hammam or royal bath (14th century), the only one of that style that is preserved in its entirety in the West.

It was the private bath of the Nasrid sultans, their family and the aristocrats close to them. It emulated the model of Roman baths: with a room with cold, warm water and another with steam.

The tiles on the columns and plinths are impressive, and, above all, it is worth looking up to the ceiling to contemplate the vaults pierced by glazed ceramic skylights in the shape of eight-pointed stars and peripheries. A marvel.

The gardens of the Generalife

Sometimes the life of these palaces goes unnoticed under the immense forcefulness of their facades and their virtuous interior design. But there is a place that shows us what daily life and coexistence was like in these places: the orchard.

Between the Alhambra and the Generalife, they have been preserved for hundreds of years. cultivation spaces or almunias. A good suggestion is to go for a walk around the four orchards – they are about seven hectares – located on the slopes of Cerro del Sol.

Those were once the recreational estates of the sultans. In Nasrid Granada, there was a unity between orchard and garden, the cultivated land had the double function of providing food and pleasure.

With its fruit trees, vineyards, fig trees, pools, pomegranate flowers, ditches and fountains, the place resembled a small oasis surrounded by the austere reddish color of the walls.

A landscape formed by terraces created by the ingenious Andalusian agricultural technique.

Inspiration from the Washington Irving Tales

In the Palace of the Lions, there are six rooms – they were called the Emperor’s Rooms – that were built so that King Charles V could stay while he was in Granada.

Almost 300 years later, in 1829, the American writer and diplomat Washington Irving resided in one of those rooms called the Fruit Room.

There he wrote one of his most memorable works: Cuentos de la Alhambra (the initial title was Set of tales and sketches on Moors and Spaniards), a fantasy genre tale and travel chronicle in the style of Thousand and One Nights that he developed thanks to the legends that the inhabitants of the Alhambra explained to him.

Reading it is probably a highly recommended source of inspiration for all those travelers who are thinking of venturing into the fascinating world of the Alhambra.

Sleep in the Alhambra

Depending on the time of year, The Alhambra usually closes its doors at 6.30 p.m. or at 8 p.m.. With that schedule, after the visit, it is normal to go down to Granada and spend the night in one of the hotels scattered around the center. There are of all categories and tastes.

However, there is the option of staying overnight inside the walls. Yes, it is possible, in the highly requested Parador of Granada.

Built in an old 15th century convent by decision of the Catholic Monarchs, it has a privileged location between the Partal and the Infantas and La Cautiva towers, in front of the Generalife gardens.

Stone arches, beamed ceilings and a restaurant with a great reputation. The views from several of the rooms are a luxury for the senses.

"We'll all be dead in 2024": The Super League is supposed to save football

Viola Davis: the best films of the nominee for best actress atmp

Castlevania 4: premiere, trailer, characters, synopsis and everything about the series