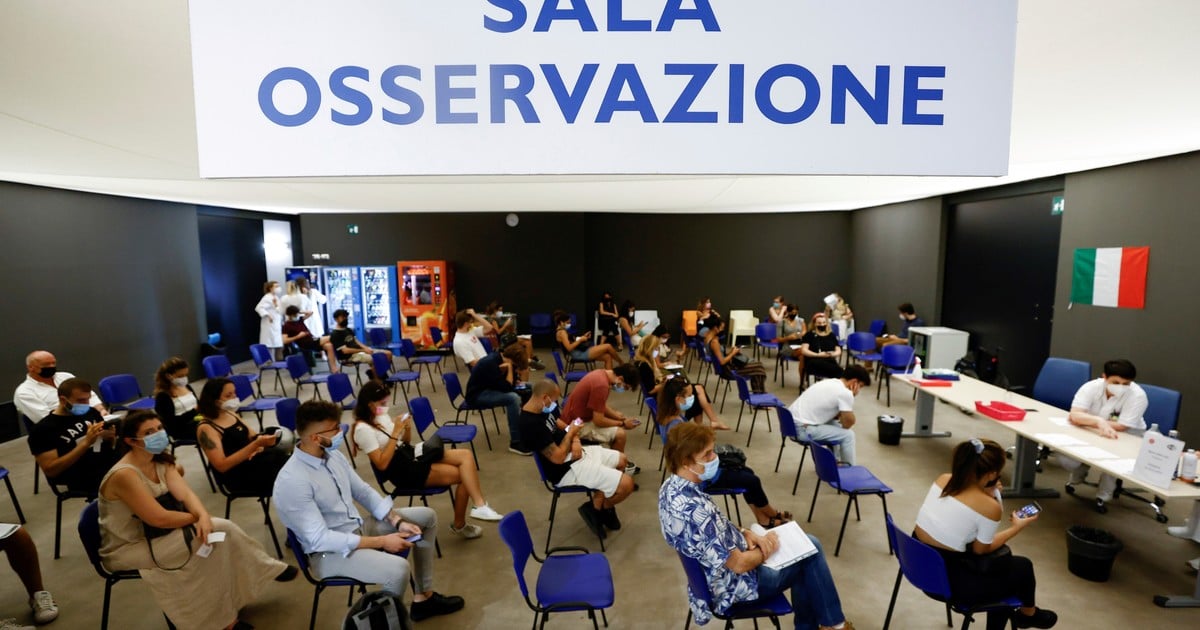 The government of Italy approved the health passport or Green Certificate mandatory that will allow those vaccinated to access a wide variety of services. Some decisions will cause controversy.

This is the case of education, where will be mandatory for teachers, professors and non-teaching staff obtain the Passport. This will force more than 200 thousand teachers and professors to receive the vaccines.

In various southern regions resistance is registered and mediation was sought, but finally it was approved to make inoculation mandatory. Who does not present the Green Certificate will be separated for “unexcused absence”. If the refusal is repeated until the fifth day of absence, the employment relationship will be terminated and “the remuneration will not be due.”

In practice it means flat and smooth dismissal. The measure has been rejected by the right-wing parties, one of which is the League of leader Matteo Salvini, which is part of the government.

The vaccine to obtain the “green passport” in Rome. Reuters photo

The obligation of vaccination in the educational area already exists in the health sector, where doctors are being suspended and fired and paramedics who refuse to get vaccinated.

From this Friday the health passport comes into effect, giving access to a wide variety of enclosed spaces, such as bars, restaurants, cinemas, theaters, concert halls, stadiums, swimming pools, gyms. The health passport allows avoiding the prohibition of being in closed places as happened especially with quarantines.

From this Friday the tables are reopened in the bars and restaurants in the closed places, while the green pass is not required in open places.

The alternative to the requirement to present the green pass is to display the results of swabs and tests that certify that the holder gave negative to the contagion test.

There is open controversy in Italy about the obligation that is set on those responsible for the exercises of control identity and use with cell phones a program that, linked to the health passport, establishes permission to enter the premises.

It will also be used in long-distance trains, ships and planes in the first weeks of September.

The data for this Friday indicate 7,230 deaths and 27 deaths. They confirm that in the fourth wave of the pandemic, contagions of the Delta variant, with a dominant presence in 95% of infections, continue to rise but at a less sustained rate compared to the previous week.

The deaths they remain stable while hospitalizations increased by a hundred and in eight cases the admissions of the most serious cases in intensive care.

The growth of patients in normal hospital wards for Covid19 patients and intensive care wards remain at very low percentages 4% and 3% respectively.

The announcement that a level of more than 71 million inoculated doses was reached, with a proportion 57% of adults vaccinated, prompted optimists who hope to achieve full social immunization by the end of September.

The Gimbe Institute noted that supplies remain strong through 2.5 million doses per week. But 2.7 million people over 60 years of age who have not completed the vaccination cycle remain unvaccinated, while 1.98 million have not yet received the first dose.

The Delta variant, which occupies world attention due to its rapid spread, has shown volatility that complicates forecasts. In the Netherlands there was an unprecedented, unforeseen peak, which was followed by a sudden drop in new cases. Britain went from seemingly unstoppable growth to sudden and steep decline.

It is undoubted, experts believe, that the running speed of the Delta virus has been reduced almost unexpectedly. In Spain in the third decade of July the epidemic was flying with a growth of 50%, but now it has stabilized downwards at 20%.

In Lombardy, the largest Italian region, the slowdown in the rise of the virus leads scientists to believe that may be near the highest peak in the coming days.

From Japan came a “Worrying warning” towards the Lambda Variant, which has grown mainly in Latin America, but which has spread to half of the European countries and is now penetrating Asia.

Lambda was discovered in Peru in August 2020 and its greatest danger is its ability to resist vaccines.

On the other hand, it was announced, in relation to the vast “hacker” attack that disrupted the data transmission system of the Lazio region, whose capital is Rome, that after three days in which the best Italian analysts have intervened, it has been possible to reestablish the reserve area for vaccinations in the hundreds of existing centers in the region.

The North American FBI has intervened at the request of the Italian authorities, together with Europol technicians. Three times the “hackers” they tried to get deep into the system and control it, but it was managed to reject them.

Insistently the name of the group “Sprite Spider” is made as the author of the attack, but many are those who believe that the attack has had the characteristics of a terrorist political act. Lazio is the region that has vaccinated the highest number of people in the main metropolitan area of ​​Italy, which is Rome, with 5.2 million inhabitants.

The attack would not be one more aggression of groups like “Sprite Spider” specialized in asking for ransoms to be paid in bitcoins, but would intervene in the confrontations against the government, which is implementing the Health Passport and making efforts to complete the vaccination plan to immunize 80% of the adult population at the end of September.

It is contrasted by the aggressive groups “No vac” who oppose mass vaccinations and believe that the mandatory use of the Green Certificate imposes the “health dictatorship.”

The complex computer work to restore the data of the general health system, qwhich have been largely saved.