What President Joe Biden said after speaking with Gustavo Petro 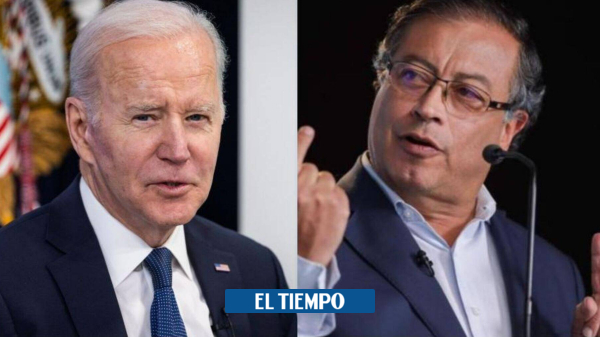 (The issues the US is willing to talk to Petro about)

After his victory, Petro spoke by telephone for 20 minutes with Antony Blinken, Secretary of State of the United States, where it was learned that the latter reminded him that his country shares with Colombia deep ties and interests in terms of democracy, security, prosperity , economy and human rights.

(Gustavo Petro is branded a ‘narco-terrorist’ by Governor Ron DeSantis)

Now, the turn was directly with the US president, who stated that the first thing he did was “congratulate him and Vice President-elect Francia Márquez on their election.”

In a press release revealed by the White House, the following is stated: “President Biden praised the Colombian people for holding free and fair elections and reaffirmed the support of the United States for Colombia.”

On the way to a more intense and normal diplomatic relationship, I have now had a very friendly conversation with President Biden of the United States.

In his words, a “more equal” relationship for the benefit of both peoples.

Later, the talk continued with an invitation to work together on different issues.

See also  Rome 2-2 Verona. In recovery, Mourinho was sent off

“President Biden stressed that he hopes to work with the president-elect (Gustavo Petro) to continue strengthening bilateral cooperationincluding on climate change, health security, and implementation of the 2016 peace agreement.”

Biden thanked the leftist leader for “the opportunity to discuss bilateral security and counternarcotics cooperation.”

Weeks ago, Juan González, National Security Adviser for the Western Hemisphere of the US president, lamented that the agenda between the United States and Colombia has been dominated for so long by the fight against drugs and proposed that, from now on, it focus more on the opportunities that can be built in the country to benefit the population.

“We should have started much earlier to de-narcoticize the agenda. The number of hectares eradicated, the number of extraditions became the measure of success -of our efforts in Colombia- and less in how we could introduce opportunities. I am not minimizing what was done, because Republicans and Democrats contributed a lot of effort to that. But we have to talk to Colombians about something more than drugs, talk to them more about opportunities,” Juan González told this newspaper.

Congratulations to the Colombian people for exercising their right to vote and reaffirming the strength of their democracy. We look forward to continuing our strong partnership with President-Elect @petrogustavo and building a more democratic and equitable hemisphere.

Finally, the United States revealed that during the call, Biden and Petro discussed the importance of mutual respect and partnership as the foundation of relationship between the United States and Colombiaand agreed to have their teams monitor and engage directly with shared interests.

Brian Nichols, US Undersecretary of State for Western Hemisphere Affairs, told EL TIEMPO that the members of the US administration are “ready to talk about a large number of issues with the new Petro government.”

In that sense, according to Nichols, the US government wants to start a “conversation about shared priorities and how we can work together to generate improvements for the region and its inhabitants and to help the working classes and those most in need” with the next president.

‘We look forward to working with President-elect Petro’: Antony Blinken The United States will ‘renounce’ the use and production of antipersonnel mines