What innovation is cooked in the new Elbulli 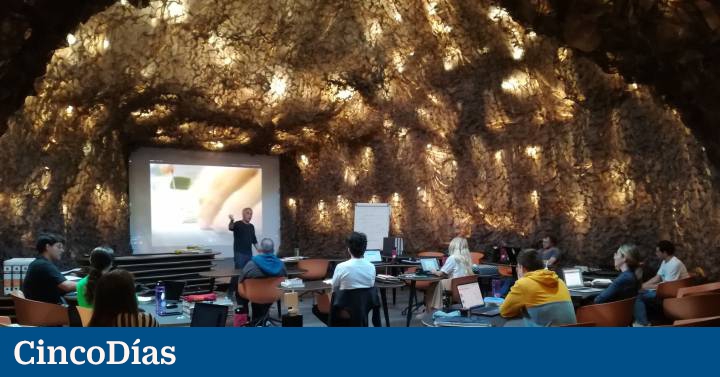 In the new elBulli, now elBulli1846, there are no cooks. The new team that accompanies Ferran Adriá in the mythical Montjoi cove, in Girona, transformed into a laboratory on innovation and an exhibition space, there is a large group of professionals, from the world of architecture, philosophy, museography, design , geopolitics, business administration, document management, psychology, the service sector or market research.

It is a multidisciplinary team, of especially restless people, interested in innovation. In different calls, different groups of professionals willing to share 77 days with Ferran Adrià. “Learning from innovation, opening paths, asking a lot of questions and looking for some answers”, explains Marcel Planellas, professor at the Department of General Management and Strategy at Esade. But above all to discover the importance of details such as punctuality. Or the need to dedicate 80% of the time to individual work, in silence and without mobile phones, and 20% to teamwork. With a pencil in hand and with a morning cry: “attack!”.

The retreat, almost monastic, is occasionally interrupted with a visit, which Adrià calls an agitator. One of them, as recognized by Planellas in 77 Innovative Attitude, edited by elBullifoundation and CaixaBank, a guide that aims to guide especially SMEs, micro-companies and the self-employed to reflect on their personal challenges and those of their organization. Serve as data that in the world there are 400 million companies struggling to survive. Nor is it about talking about visionaries like Steve Jobs or Amancio Ortega.

The example of Ferran Adrià can serve. Because “He is not afraid to go against the current, to break the status quo. And he believes that it is not always necessary to innovate to be successful”, explains the teacher, who recognizes how important it is to combat innovatitis acute that the business world suffers. “Each person, each company must decide if he wants to innovate and, if he wants to, the level of innovation he wants to achieve.”

What you do have to have is an innovative attitude. And what a leader should do, says Bernabé Gutiérrez – who began his professional career in Washington as an intelligence analyst, has participated in the Senior Executives in National and International Security Program at Harvard Kennedy School, is a geopolitical advisor and one of the first participants in the conference of elBulli1846–, is to ask why it is necessary to innovate, why do it, and where, when, who and how to innovate.

Museographer Guillermo Fernández has an impact on this idea, convinced that museums, for example, are called upon to carry out a great task in contemporary education: “We have to dissociate the idea of ​​innovating from that of succeeding”. And he cites the fascinating stories of “Galician shirt men who knew how to take over the whole world”, or the musicians and soccer players, “for one that fills stadiums, there are thousands who, much less conspicuous, they manage, with their day-to-day effort, to carry out a project that allows them to earn a living with what they like to do the most”, explains Fernández, who adds that in many cases it is not necessary to innovate to get ahead, although it is have an innovative attitude. “Making a cheese rigorously following a traditional method or building excellent violins preserving the way of working of the old luthiers, are examples of ways to succeed without innovating”.

Talking about innovation in the company leads to talking about management as well. “Both management and innovation are two transversal systems within the company, because they interact with the rest of the systems and lay the operational foundations of a company. Any change in them leads us to modify the other systems”, explains Nerea Martín, an expert in social management –she is in Guatemala developing a social project and will finish her studies at the Wharton business school–, who also highlights innovation management , which organizes the systems and subsystems of the innovation program and distributes the resources allocated to innovation.

The objective of elBulli is to show the genealogy of innovation, capture its complexity and present a methodology capable of connecting knowledge to better understand what can be innovated. To do this, says Víctor Caleya, a Philosophy graduate, it is necessary to “have the ambition to understand what is related to your potential for innovation.” Because information reaches everyone, but not everyone knows how to filter it, “this is what determines the difference between a wise man and a charlatan, between a good and a bad decision, between opinion and knowledge.”

It is difficult to understand innovation in its entirety, explains Eli Puiggròs, a publicist by training, dedicated to directing and managing market research projects, “because it is multifaceted, since each company has a different perception”. Each of them is based on the meaning of the concept of success. For certain companies, being successful means making money, while for others it means opening paths, generating scientific knowledge, or receiving awards.

One of the secrets that explains why elBulli continues to be a benchmark in innovation, reflects Gemma Vives, an expert in information processing and documentation, lies in the people who made up the hard core of the restaurant’s creative team, led, among others, by the brothers Ferran and Albert Adrià, Oriol Castro, Eduard Xatruch and Mateu Casañas, these three now in charge of the restaurant Enjoy in Barcelona. “This seemingly obvious secret, due to the enormous creative talent of the chefs, brings us to a deeper point: how did they manage to last so many years working together?” The answer is called mutual admiration. And it is important that in a company, beyond the final result obtained, there is a balance of talent among the leaders.

Failure. “We have been taught that failure is regrettable,” reflects Guillermo Fernández, museum project consultant. And he states that for companies with adaptive approaches, failure is an indicator that their adaptation is not being adequate. However, for those with a transformative profile, it is a stimulus that brings them closer to the transformation they seek.

Is the root of parsley eaten?. This is the question asked by Ferran Adriá one day at elBulli 1846, after analyzing how elBulli had reached such high levels of creativity and innovation. “They had reached that point because they had questioned everything, down to the smallest detail,” concludes psychologist Albert Pi. That’s why they asked themselves the parsley question or the salty ice cream question.