What did Sergio Massa and Joe Biden’s advisor for Latin America talk about? 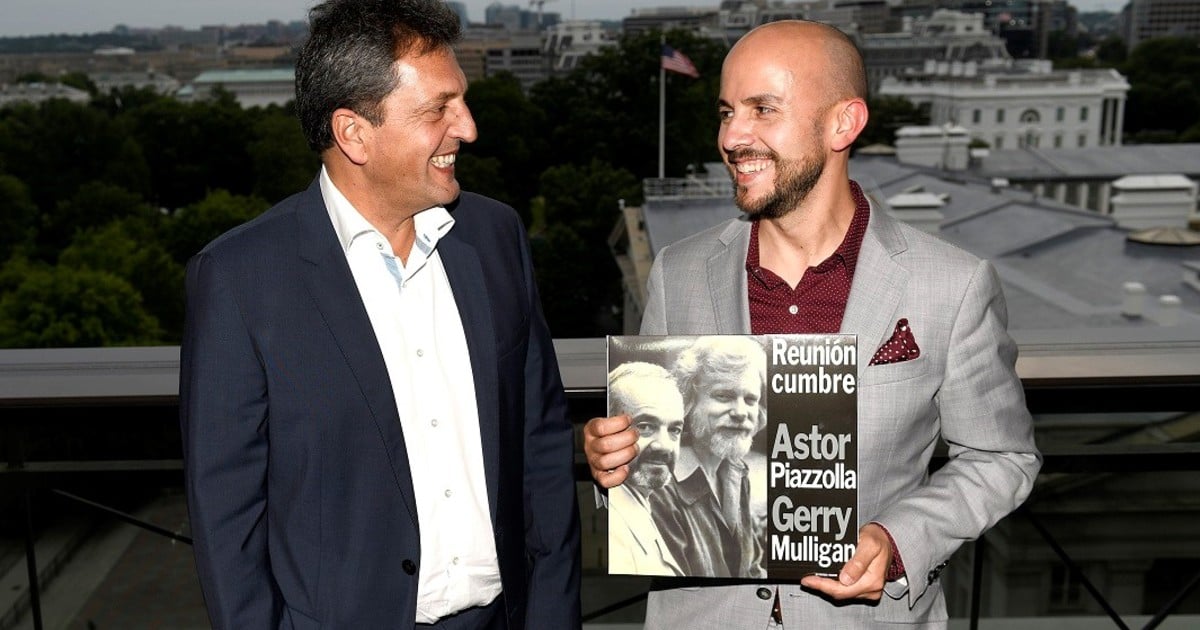 They had achieved harmony in April, in Buenos Aires, when they ate together asado and empanadas. This time, on American soil, the menu included a lobster roll and red wine on one of the best terraces in Washington, with views of the White House, and very Argentine gifts such as a soccer jersey, obviously from Tigre, given the nature of the visitor.

Thus, the leader of the Chamber of Deputies Sergio Massa began his visit on Sunday night in the United States with a dinner with President Joe Biden’s senior advisor for Latin America, Juan Gonzalez, which lasted about three and a half hours and included a review of the hottest topics: pandemic, vaccines, the role of President Alberto Fernández in the region, Nicaragua, the legislative elections in October and the renegotiation of the debt with the International Monetary Fund.

“There is an enormous vocation of United States policy to collaborate with the Argentine situation”Massa told the Argentine press briefly in the US capital about the outcome of that meeting, the first of his high-profile tour of this country.

Massa met González at the rooftop of the hotel W, overlooking the Washington Monument, and one of the places where officials often have cocktails and have informal gatherings. González thus returned the invitation to a dinner at Massa’s house in April, when the official visited Buenos Aires for a couple of days.

Massa was attentive to the details: He gave him the Summit album, by Astor Piazzolla and Gerry Mulligan, a wine from the Catena Zapata winery and Tigre’s shirt, Since the official – of Colombian origin who came to the United States at age 7 – is a soccer fan, although he practices cross country and mountain biking.

The leader of deputies is the first official of the Argentine government coalition to arrive in Washington since the start of the pandemic and the highest profile to date. It does so at a time when our country seeks to strengthen ties with the Biden administration, whose role is vital for any debt renegotiation in the Fund.

Sergio Massa, on tour in the United States

Aware of the importance of the subject, Massa went to dinner with Sergio Chodos, Argentine representative to the IMF. He was also the ambassador Jorge Argüello, while González was accompanied by Andrew Sanders, director for the Southern Cone of the National Security Council.

Massa does not have formal meetings with the Fund scheduled, at least for now. As he knew Clarion From sources in the Argentine delegation, the head of the Deputies presented González with the classic argument used in the Frente de Todos: that beyond the technical issue, on the issue of debt there is a political issue. That the loan that was granted to Argentina in 2018 was political (a specific support from the government of Donald Trump to that of Mauricio Macri) and therefore the renegotiation in progress should have a similar approach.

The conversation, according to the sources, did not include details that the ruling party has raised, such as the elimination of rate surcharges or an extension to 20 years. But González, as Massa said, He showed a vocation to help Argentina.

Argentines point out that the United States sees the need to refocus its relationship with Latin America in the face of China’s advance on the continent and that our country, and particularly Peronism, can be a vehicle of balance in the multiplicity of views that exist in the region today.

They estimate that the Fernández government could be a good interlocutor at the moment with most of the governments in the area, and even more so if there is a change of course in Brazil soon.

Massa also talked about the possibility of a visit by President Alberto Fernández to the White House this year, something that Ambassador Argüello has been working on for months. Biden, very careful about the coronavirus, will only now begin to receive leaders from central countries such as France or Germany. Everything is possible, but the Argentine president is not anticipating the traditional American allies.

The subject was also discussed at the meeting vaccines and the Argentine delegation is optimistic in this regard because it believes that there may be surprises with announcements in the coming days that could benefit our country more than estimated. The Biden administration has promised to donate 6 million doses to our region (out of 25 million in total to the world) from Pfizer, Moderna, Johnson and Johnson.

Pfizer is approved by the ANMAT, but there are still rigidities in the contractual terms with the Government, so that a shipment from that laboratory could be complicated. Moderna and Johnson and Johnson have not yet been approved by the Argentine health agency. But the ANMAT could solve that problem soon, they estimate.

They also talked about the next legislative elections In our country and the vision of the Argentine was that it was going to be a competitive process because the economy and vaccination will advance and because the opposition is atomized.

Strangely there was no mention of the Venezuela issue, but there was Nicaragua, where there was talk of a government role in the release of detained opponents and of a forthcoming meeting at the OAS on the convulsive situation in that country.

This Monday, Massa continued his agenda with a meeting with Dan Restrepo, former adviser to Barack Obama for the region and a meeting with the president of the Foreign Relations Committee of the Chamber of Deputies, Gregory Meeks.

On Tuesday he will have contacts with leaders of the Jewish community and legislators such as Mario Diaz Balart and Jaime Herrera Beutler and the democrats Adriano Espaillat and Debbie Wasserman Schulz. TYou will also meet with the president of the Foreign Relations Committee of the Chamber of Senators of Congress, Bob Menendez.

On Wednesday he meets with the chairman of the Subcommittee on the Western Hemisphere and International Economic Policy of the United States House of Deputies, Albio Sires, and in the afternoon he will make a presentation at the Interamerican Dialogue on the challenges Argentina faces today.

On Tuesday and Wednesday he will have two dinners at the embassy with businessmen and relevant economic actors and members of the Argentine community in Washington.

On Thursday he will travel to New York, where he will meet with Jack Rosen, President of the American Jewish Congress, and then will have a presentation at the Council of Americas, where investors interested in Argentina will participate. Before leaving back on Friday, his tour closes with a meeting with investors and the former Democratic president. Bill Clinton.