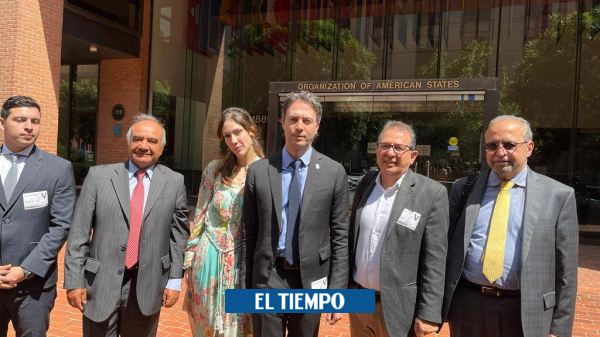 The mayor of Medellín, Daniel Quintero, went to the Inter-American Commission on Human Rights, IACHR, on Monday to request an immediate intervention to reverse the suspension decreed last week by the Attorney General’s Office and issue precautionary measures to protect his life, which, he said , is threatened.

After his meeting with the hemispheric entity, Quintero told the media in Washington that he had presented his case before the commissioner for Colombia, Joel Hernández, the Executive Secretary of the IACHR, Tania Reneaum, and other officials in this institution.

It may interest you: Cabinet prepares for Government Council with mayor (e)

“It is a shame that in order to defend democracy we have to leave the country. Here the constitutional course has been broken. The Attorney General’s Office and President Duque have challenged the inter-American system and that is why we came. To defend not only our right but the political right of the citizens who voted for us,” Quintero said.

According to the Mayor, they asked the IACHR for four specific things: “a precautionary measure to avoid the dismissal that the Attorney General intends, who a couple of days ago said publicly that she was not going to abide by the ruling of the Inter-American Court of Human Rights (IA Court), that our lives be protected and the scheme of security while we are suspended, that attention be paid to the risk against democracy in Colombia, and a tutelary fund measure that definitively prevents what the Attorney General’s Office has been doing, which is suspending the political rights of the opposition leaders in Colombia”.

Quintero was referring to a ruling of the Inter-American Court of Human Rights of July 8, 2020, which is mandatory for the state, in which it concluded that the political rights of the Mayor of Bogotá Gustavo Petro had been affected with the sanction of dismissal and disqualification. imposed by the Attorney General’s Office on December 9, 2013 and ordered “adapt its internal legal order in such a way that elected officials cannot be dismissed or disqualified by decisions of administrative authorities,” such as the Attorney General’s Office.

Petro was reinstated in his position in March 2014 by virtue of a tutela action that was filed after the Commission decreed, through a precautionary measure, that his political rights had been violated.

What Quintero intends is that, given the precedent generated both by the Commission and later in the background with the 2020 Court ruling, the IACHR grants precautionary measures as it did in the Petro case while the case advances through the inter-American system.

It is not clear, at this point, whether the Commission will heed his request. Although the precautionary measures in the Petro case are undoubtedly a precedent, the IACHR rarely hears cases related to violations of political rights.

That after a reform that was made to the system 5 years ago and that limited the scope of said measures to cases where what is at risk is the life of a person.

What the Commission could do is take the matter to the Inter-American Court to request that it issue “provisional measures,” which are equivalent to the precautionary measures of the IACHR but mandatory for the states that are part of the system.

Unlike the IACHR, the Court does have the power to do so in a case where there is a possible violation of political rights.

The Court, in addition, could rule quickly in the face of an apparent violation of one of its sentences, that of July 2020.

According to Quintero, all scenarios are being explored and, for now, the Commission has requested “additional information urgently” in order to move forward quickly in the process.

According to the Mayor, he also warned the Commission that in Colombia there is a “gigantic risk of democracy breaking down” and He asked both the organization and the international community not to turn their backs on the country at this time.

The mayor was also scheduled to meet with Cejil and Wola, two NGOs with extensive experience in the inter-American system, as well as a US congressman.

-EE US Will Defend Taiwan In Case Of Attack, Says Joe Biden-There Was An Assassination Attempt On Putin, Says Ukrainian Intelligence