What are those faces on the bridge over Avenida Libertador? 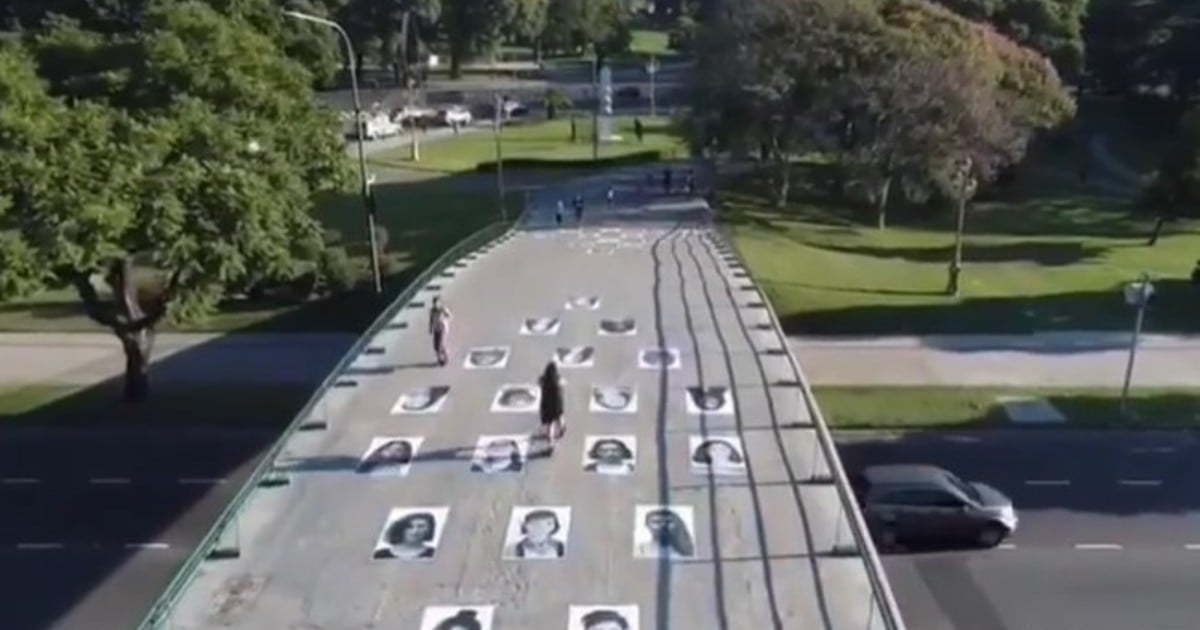 They are 50 portraits of women and dissidents representative of the feminist struggle of recent times, which has just been located on the bridge of the Faculty of Law, next to the Recoleta Cultural Center, and with which the walker suddenly bumps into: the effect, impacts.

Work of the artists Nina Sosnitsky, Julia Bronstein and Sheila Becker: Our glances -that is the title of this urban intervention- is composed of images that, like other artivism urban, appeal above all to emotional reaction: artivism -or artistic activism- defines actions that are deployed in the public space and put activism, art and aesthetics in dialogue, to impact the sensitivity of a community. A new language for himto social transformation, Through the art.

In this case, as he was able to reconstruct Clarion, It is a photographic intervention that is part of the project Inside out, promoted in 2011 by the French photographer, gallery owner and artist JR, who from anonymity reveals the identity of the local communities he photographs.

How do they do that? They portray the citizens of that place in a public place -in this case fighters for the expansion of women’s rights and against gender violence-, they print the photos in large dimensions, poster-like, and then each black and white image is pasted by an “action group” onto a wall, a building facade or ceiling, and even on stairs and trains, creating an art gallery at the same time. fresh air; in this case over the bridge porteño.

Thus, its activists explain, this global platform of photographic projects is committed to raising awareness about different causes – varied issues such as hope, diversity, violence, climate change – through a public art action.

What’s more, every action is documented, archived and displayed online. Until here, more than 400,000 people have already participated of the different group projects that are exhibited in different parts of the world.

They have already done so in a total of 138 countries and territories, from Ecuador to Nepal, from Mexico to Palestine.

Women are heros, for example, was another idea made by JR in Brazil, Cambodia, India, Kenya, Liberia and Sierra Leone, to pay tribute to women.

Not just any look

“Photography and feminism have one thing in common: the gaze. But not just any gaze, a critical and transformative look“, affirm the photographers in charge of the action in Buenos Aires.

Also, they maintain that “these are the faces of some of the anonymous women who fight day by day. Feminism is transversal to us and we carry it everywhere. These are our views on feminism, on society and on the world. “

“A photographer observes his object to be portrayed, just as we observe the world around us, every detail is important, it makes the final photo and in the case of the feminism, we observe the system that surrounds us. Once someone begins to have that look, it is almost impossible for it not to become more acute over time, they even say that within our eyes you can see the details that make up our history, “they say.

⚡️In Recoleta the voices of women are raised. During March and April, we started a new campaign created and starring women.

These two months you will be able to reflect, discuss, participate, learn and share views around the struggle of women today. pic.twitter.com/BpSemhMbhq

The exhibition, registered within the framework of the women’s month at the Recoleta Cultural Center, can be seen on the pedestrian bridge that crosses Avenida Figueroa Alcorta at the height of Pueyrredón.

Since March and throughout April, Recoleta has been proposed as a space dedicated to reflecting and sharing views on the struggle of women: there was and there is meetings, recitals, workshops, talks, plays, by and with artists and references such as Ingrid Beck, Florencia Freijo, Marilina Bertoldi, Eruca Sativa, Paula Maffía, Silvina Giaganti, Violeta Alegre, Feminacida, Thelma Fardin, Estampa Feminista, Vir Cano, Irana Douer, Magma Colectivo Feminista, Marina Otero and Mariana Chaud.

This is the fourth campaign carried out by the center with a gender theme (the first was Women here and now, the second No more and the third Sister strength). The programing It is free (from Tuesday to Sunday) and all activities are carried out with limited capacity and in compliance with the sanitary protocol.

Ponferradina and Fuenlabrada seek a victory to forget