“We fled because our destiny was death” 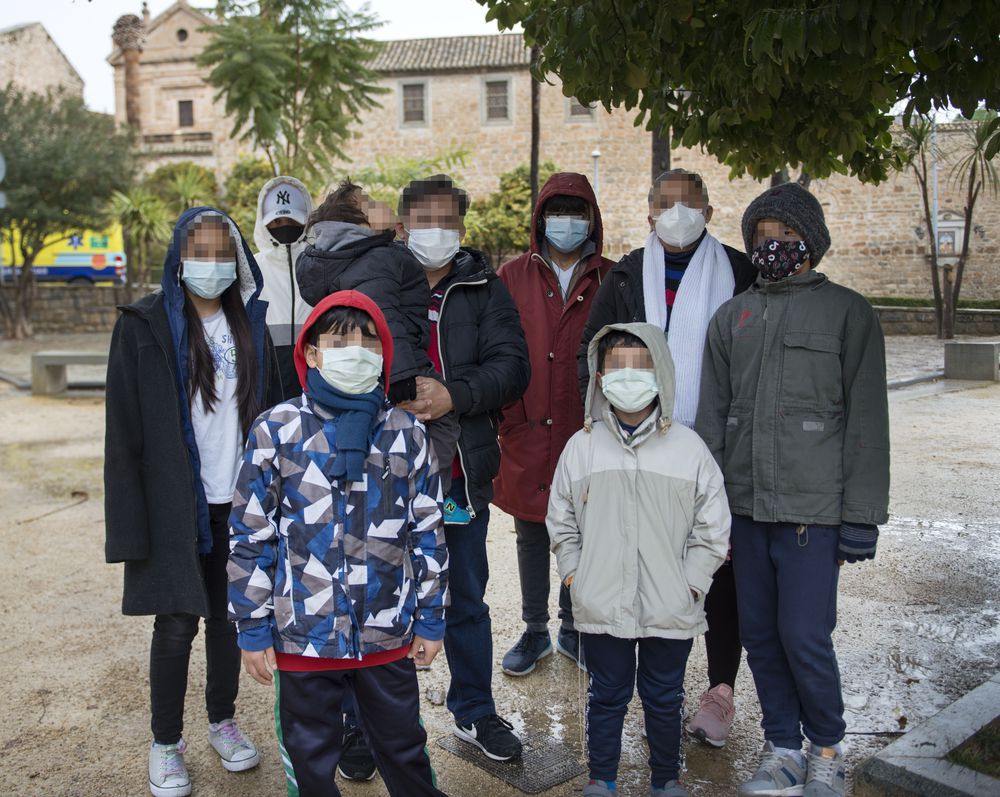 José Wilfredo Orellana, a 37-year-old from Honduras, had to say enough last Christmas. “Why wait any longer if they are going to kill us,” he said to himself. Together with his family, he drew up a plan to leave his country and escape the threats they had been suffering from the maras and groups of gang members in his city, San Pedro Sula, considered for many years the most violent in the world. “If we don’t flee, our destiny was death,” says Orellana with a broken voice. The plan was ambitious because he fled with his wife and seven children, between the ages of three and 19.

“We decided to fly to Spain at Christmas so as not to raise suspicions; we simulate a tourist trip ”, recalls this Honduran who, secretly, had to sell all the family assets to be able to collect the 12,000 euros of the cost of plane tickets for the nine members of his family. After spending a year in Barcelona, ​​where they stayed with other relatives who had fled Honduras long before, the Orellana family has now arrived in Jaén under the international protection program, with which they hope to soon achieve the right of asylum or or subsidiary protection after claiming that they cannot return to their country of origin because of the danger to their lives.

The case of the Orellana family is quite exceptional because it has so many members, but more and more migrants are seeking security in Spain that they cannot find in their countries. In recent years, Spain, which is already the EU’s main recipient of asylum seekers, has become one of the main destinations for thousands of Central Americans fleeing violence and misery. Last year, the country registered more than 87,500 applications for international protection, according to data from the European Asylum Office (EASO) as of December 14. The most numerous are nationals of Venezuela (32%), Colombia (31%) and Honduras (6.2%).

Death threats from the Mara Salvatrucha 13

In Honduras, José Wilfredo Orellana ran a small metal structures company and his wife, Karen Torres, 36, a grocery store. “We had no shortage, but the situation started to get devastating,” he explains. For five years, the family endured extortion, attacks and death threats from the Mara Salvatrucha (MS) 13, one of the bloodiest groups installed in San Pedro Sula. “They knocked on the door of the house at dusk and asked us for ropes and bags to scare us, something that had us psychologically in a family trauma for fear that they would carry out their threats. And that is how they were forced to pay what they were required to do each week: 1,500 Honduran lempiras, the equivalent of about 50 euros. “If you don’t pay, they go after your family,” says Orellana, desolate.

At first, the marriage tried to keep their children away from this “permanent trauma”, although they did not always succeed. In fact, violent groups were also embedded in schools and their children came to witness cold-blooded killings in classrooms. The eldest, 19-year-old Josué, suffered bullying from the gangs, a circumstance that also encouraged the family to flee to Spain: “The school was used to torture young people who did not cooperate with them; I myself was assaulted and beaten several times for not giving the money requested by these criminals, who call themselves owners of the streets ”. This testimony and that of other members of the family has been reflected in the statement presented to the Police to process his asylum request.

Direct attacks and homicides, threats, extortion and forced recruitment of young people by maras or criminal gangs are, in most cases, the reasons that lead these people to request asylum. According to a study by UNICEF and UNHCR, the office of the UN High Commissioner for Refugees, threats increasingly affect families and entire communities. In Honduras, between 2014 and 2018, 247,000 people were internally displaced by violence, according to data from UNHCR.

Now, the Orellana Torres hope to see the light at the end of the tunnel in Jaén, although they know that it will not be easy. “This family lives in a situation of clear social vulnerability, which forces them to start from scratch in their lives,” says Antonio Morales, coordinator of the international protection program managed by Jaén Acoge. For now, the school-age children of José and Karen have already been enrolled in schools and institutes in Jaén. “They have integrated very well, they are very happy,” says the mother. The accommodation and maintenance of the family is provided by Jaén Acoge with the subsidy it receives from a program co-financed by the Ministry of Inclusion, Social Security and Migration and the Asylum, Migration and Integration Fund of the EU. This 18-month program also has a job placement itinerary, with which this Honduran family hopes to settle permanently in Spain.

But the Orellana family’s path in Spain is fraught with bureaucratic hurdles, and they run the risk of having their asylum application denied and all nine family members becoming irregular immigrants. After all, most of the resolutions in Spain are negative (in 2019 only 5% were favorable) and do not usually recognize the protection of Central Americans fleeing gang violence. “The biggest drawback is that they have to prove in some way that they are the object of threats in their country of origin and, of course, that is not always possible,” says Elena Tajuelo, president of Andalucía Acoge. This is one of the refugee care NGOs that claims that the protection concessions take into account people who flee from gang violence and are not protected by their States.

Orellana exposes the main evidence that they were being subjected to extortion and persecution. “What family leaves everything in their country and flees with their nine members if not for fear?” He wonders. And he points out that it was impossible for them to bring these facts to the police authorities of his country because, he says, “many of its members are integrated and are an active part of the criminal structures, and many people have died after filing those complaints.”

Pedro: Al Ain is required to return from Sharjah with the three points