Washing machines, sofas and bicycles like new: the ‘garbage’ that is thrown away in the US 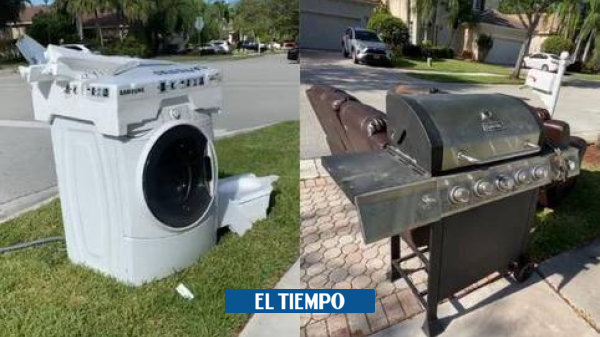 “We couldn’t believe it,” was what Argentine Lucas Hudak said, who on his TikTok account recounts how his experience living in Miami, United States, has been.

(In other news: USA: Man shoots McDonald’s employee because his fries were cold)

One of his most recent posts went viral due to the surprises he found while realizing what Americans throw away in that Florida city. The video, which he titled ‘Things that throw in the United States’, already has 16 million views.

“In this country, twice a month, they have to clean things that they are not going to use,” he explains at the beginning of the recording. Then he says that he decided to go through a neighborhood on garage cleaning day, so he found objects lying on the sidewalks.

Next to the garbage cans, for example, he found a couple of children’s tricycles and bicycles that were in perfect condition.

(We suggest: Digital ID: you can enter these countries without a passport)

One of the things that surprised him the most was a Samsung washing machine that he saw, even with its factory wrapping. Very close to that place, he found a couple of sofas and a barbecue.

On the comments, Hudak revealed that in the end he opted to take a bike and a skateboard for his sister.

More news you can read

– Is the Earth spinning faster? The shortest day in history was recorded

– Who is Nancy Pelosi, the American politician who challenges China?