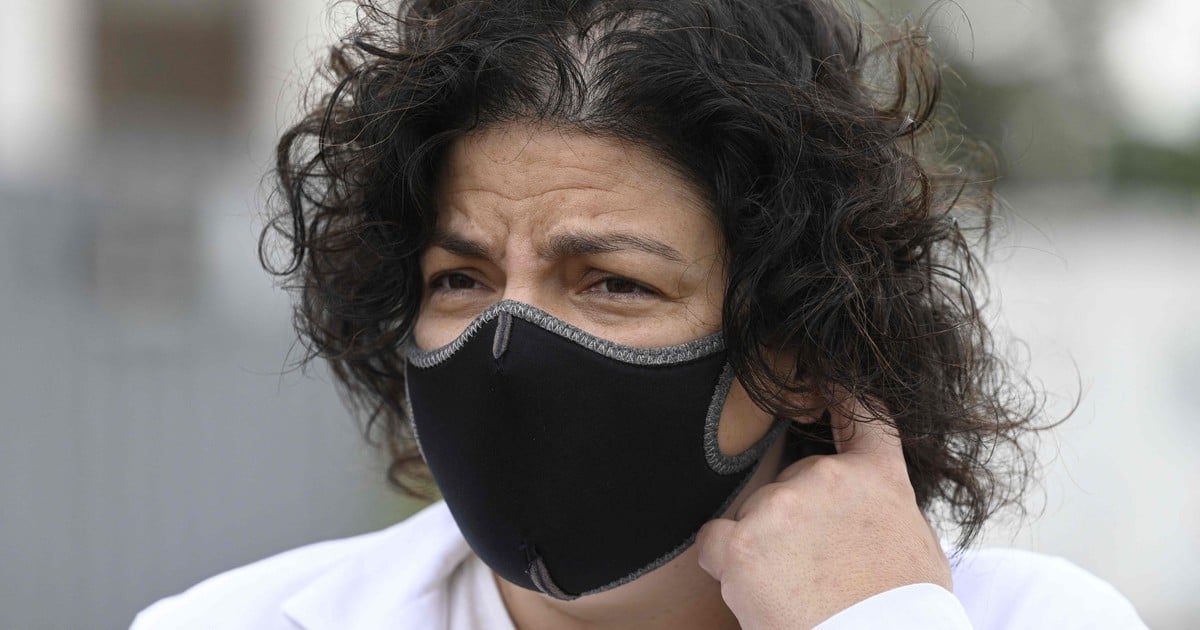 Anders Tegnell is the head of the Swedish Public Health Agency. It was the official who in May 2020, after Alberto Fernández’s criticism of that country’s plan to combat the pandemic, turned off any possibility of controversy: “This is a new disease. It will take time before we know which model works best”, He reflected. What had the President said? That the Swedish road would have meant for Argentina, at that time, a tragedy of 13 thousand dead.

The pandemic, as Tegnell said, is far from over. The initial Swedish strategy, questioned internally, underwent adaptations. As it happened all over the world. The partial balance, however, indicates that it now registers an index of 142.7 deaths per 100,000 inhabitants. He braked the curve at the beginning. Argentina exhibits 179.5 deaths in the same equation. Accelerated the same curve. Lesson for prudence that any power on duty here – now Kirchnerist – is used to not having.

The President and his administration got two things right at first. Quarantine to strengthen the health system. Intensive Therapy Units are stressed at the peak of the second wave. There are some collapses in the Interior. After the first reflection the sensors failed. The second wave was badly foreseen, which the Northern Hemisphere greatly anticipated. Very few resources in the 2021 Budget, which seems to have the fate of a basket. Delay, inexperience and ideologization in the negotiations for vaccines. Result: our country is among those with the highest levels of contagion. Heading for 90 thousand dead. Very far from the 10 thousand that Alberto said a year ago that the country could not tolerate.

The problem is, without a doubt, sanitary. Deeply political also in a year with midterm elections. Hence the numbers of all public opinion studies they alarm the ruling party. According to Managment & Fit, 60.3% of Argentines do not trust their ability to face the pandemic. And 60.7% neither in their aptitudes to face the consequences: the economic-social crisis. An aside points out that 58.4% do not believe in the effectiveness of the vaccination campaign. The combination of both planes could become an explosive cocktail of dissatisfaction.

Faced with this challenge, the government shows an awkward reaction. Reflects several well-known issues. The leadership of the President is weakened. The leadership of health policy seems to be in tatters. For decisions and communication. No resolution for the crisis looks transparent.

Ginés González Garcia, the former Minister of Health, had to resign due to the VIP Vaccination scandal. Alberto himself explained it. But the sanitary doctor continues to deny it. It is not the only deficit. His imprecision is striking when he talks about strategies in other countries. Especially when addressing the issue of vaccines. Of those that Argentina does not have. All Americans. Among them the one from the Pfizer laboratory, approved by ANMAT.

His successor, Carla Vizzotti, seems to follow suit. He also denies the VIP Vaccination, of which he participated and was aware. Many of the privileged were inoculated next to the office that she occupies in the Ministry of Health. Literal. On the other hand, it shows political and emotional limitations. He became confused and broke when he had to explain the controversy over Pfizer. He affirmed that the matter is closed after the glassy explanation of the director of the WHO (World Health Organization) for Latin America, Santiago Cornejo. The official said that Argentina had not wanted Pfizer vaccines from the Covax Fund. Bomb in the Casa Rosada. He corrected by explaining that he had not wanted them because of the disagreements with the contract until now without resolution.

Unavoidable question: what right and authority does Vizzotti have to close that discussion? The nuisance with the vaccine does not refer only to the Government. It belongs to the State. In short, to society. Differences that Kirchnerism usually does not address. The minister, days ago, was sent to Mexico to find out about the delays by AstraZeneca. He did something: a little more than 2 million doses arrived last week. Those that, according to Alberto, should be in the country in March. Out of a total of 22.4 million, according to the first contract signed by the parties.

Neither Vizzotti, nor anyone else, clarified the reasons for such delay. The Mexican lab, chosen to complement the AstraZeneca manufacturing process, which is made here by Mabxience, by psychiatrist and multirubrity entrepreneur Hugo Sigman, would not have been up to the task. That trip by the Minister of Health had another surprise. He omitted a visit to the United States, the country of Pfizer, Moderna and Johnson & Johnson. He preferred to land in Havana. Did you lack the ability to inquire into a deal with those giants of the pharmaceutical industry?

In Cuba, information was provided about the process of another pair of vaccines that are in Phase II of investigation. They could be used by 2022. The hustle and bustle of the trip led her to a moment of leisure. He could have been distracted by visiting famous singer-songwriters. He opted for a Cultural Center run by María Santucho, niece of the former ERP leader, Mario Santucho. This activity, unlike the others, he even had the registration of a photo. Curious.

The winding route of the Government has countless milestones. Alberto plants his own. He thanked Vladimir Putin because Russia brought vaccines when the world denied them. There is another look: Argentina did not know how to look for them. Power was locked in its palace interior (AstraZeneca versus Sputnik V). It ignored those produced in the USA (Pfizer, Moderna and Johnson & Johnson) with which it does not have a contractual framework. Joe Biden doesn’t know what to send to our country in the lot that will donate to Mexico, Central America and the Southern Cone.

The Government centralized its purchases at the beginning. He blocked any other management. He got out of step with the Chinese Sinopharm for a while. When he perceived the suffocation he just opened the game. Horacio Rodríguez Larreta began polls. Jujuy signed a contract with the Asian giant and Axel Kicillof announced a deal with India for a vaccine – Covaxin, from Barath Biotech – that nine nations have approved in the world. Incredible disorder in the middle of the crisis of the second wave.

Kirchnerism seems trapped in a tangle from which it intends to come out with a blow. The head of Deputies, Sergio Massa, summoned the laboratories that sold vaccines to Argentina for explanations. He brandished a warning, if they didn’t attend, whose effect would be null. Show. Before he had the permission of Máximo Kirchner. It was a way of trying to defuse opposition pressure, which filters through on various sides. Judicial causes, on the one hand. The proposal to modify the Vaccine Law that would be the obstacle to fix with Pfizer. Kirchnerism was not amused by this generosity. It would expose his game.

Together for Change exhibits sanitary mismanagement as the axis of its agenda. He also thinks about the elections triggered by his interns in the City and in Buenos Aires. The question is whether that position will last until September or November. The new electoral calendar. What will happen to the pessimism of society if the Government progresses with vaccination? There’s no answer. Perhaps another aspect of the collective spirit should be noticed. According to Managment & Fit, 73% of citizens think that it is economically worse than in 2020.

Alberto said, when inaugurating houses in San Martín built in the macro cycle, that inflation is a “pending issue” in the pandemic. He spontaneously said “in the campaign.” It was corrected. The debt also belongs to Martín Guzmán, who pray that the index for May does not touch 4%. The policy of depressed prices does not work. Perhaps that led him to resign one of his objectives: the increase in the rate of services. I wanted between 12% and 15%. Kirchnerism forced it to 9%. But those of gas will increase 6%.

The Minister of Economy does not manage to reconcile this plasticity with other decisions that are born from the heart of power. Cristina Fernández and Massa arranged a 40% increase in staff congressional. With review clause. It will benefit deputies and senators. Eleven points above the 29% ceiling recommended by Guzmán. It was his guideline for 2021. That example expanded: Hugo Moyano’s truckers and bankers were for the same goal. Another dozen guilds follow.

Nor does Guzmán propose iron options. He did so when he asked for the resignation of Federico Basualdo. “Him or me,” he ordered. The Undersecretary of Electric Energy remains undaunted in his position. That crisis was endured by the President. He convinced the Columbia professor that he would find a way out. Such a way out is that he does not resign for three reasons: his position would be taken over by Kirchnerism; it would represent a bad external sign; will make the presidential power even more anemic.

Guzmán not only understood those needs. He walks a path of recomposition with sectors of the Frente de Todos who see him as a representative of the external financial order. He began by praising the Wealth Tax. Work of Máximo K. He praised the management of Kicillof in Buenos Aires. Your keeper. He highlighted the Corporate Income Tax. It had earned him a friction with Massa.

The minister may have known how to exchange the principled classrooms for political pragmatism. Also, that he has ended up seduced by the glory of power. Or simply thrown in the towel.