Vivotecnia: the laboratory of horrors 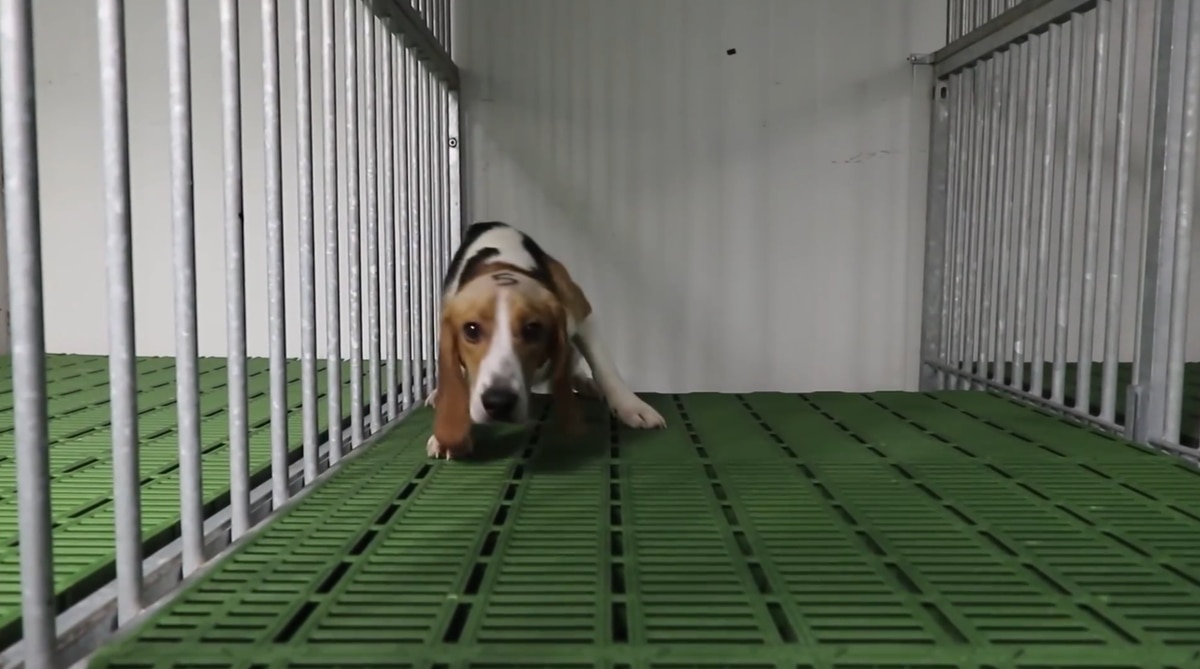 “Let the spine break”, “here is the whistle, the eggs must be there”, “psychopathic sow”, “like Hitler, passengers on the train” … The video posted on April 8 by the NGO Cruelty Free International (CFI) freezes the blood. Workers from Vivotecnia, a Madrid laboratory located in Tres Cantos, are seen handling dogs, pigs, mice, rabbits or monkeys crossing all the lines established by the animal welfare law. Hitting, sudden movements, insults, laughter and contempt. From the moment the video came to light, the controversy was served and the debate on animal experimentation was on the table. More than a week after those images were made public, recorded between 2018 and 2020, the Community of Madrid maintains the temporary suspension of the laboratory while Seprona and the Environmental Prosecutor’s Office investigate the facts. All eyes point to the more than 880 animals that are still in the laboratory, turned into alleged evidence of a crime.

There are five actors involved in this lurid story. The normally forgotten laboratory animals – now there are 130 beagle dogs, 700 rats and mice and 54 rabbits, according to data from the Madrid Executive -, the Administrations – which try to prevent the case from splashing during the electoral period -, the activists – who They have been protesting for the liberation of the animals for a week – the laboratory of horrors and CFI – the origin of everything.

The information bomb exploded on Thursday the 8th. In a matter of minutes, the woman who managed to record the images became a hero for some and an enemy for others. The networks began to burn. The Guardian collected the information and, a day later, eldiario.es. At the door of the company dozens of activists began to gather since last weekend, chanting the supposed name of the woman who released the recording. Days later, it was revealed that it was false.

All eyes focused on her. Who he was, how he had done it and why he had not reported directly to a court. CFI, an NGO founded in 1898 that works against animal experimentation, has protected it against all odds. He fiercely maintains his anonymity and diverts attention to a single idea: the important thing is the published images and the animals that are still in the laboratory, guarded by a veterinarian from the regional government and several from the company itself.

The only thing that the association’s lawyer, Carlos Contreras, has revealed is that it is a Vivotecnia worker who was part of the laboratory’s staff between 2018 and 2020. According to the lawyer’s version, he notified the company directors of the atrocities he saw every day. But they ignored him. It was then that he decided to collect the greatest number of evidence, so that the outside could see with their eyes what was happening inside. The result is summarized in “many hours of footage” and a report of more than 70 pages that is in the hands of the Environmental Prosecutor’s Office, which has opened an investigation. The Seprona agents, who are in charge of the police proceedings, are analyzing the video to verify when and how it was recorded, the assembly or the coincidence with the animals that are still in the facilities.

Whether the former employee worked under the advice of CFI is still unknown. It is also a secret. And it may never be revealed. The organization filed a criminal complaint last Monday in Court number 6 of Colmenar Viejo and included a request: that she be protected under the figure of the whistleblower, a legal concept collected in the European Parliament since 2019 for people who report alleged dishonest or illegal activities to which total confidentiality is assured in court. They still don’t know if the judge will accept it.

The other major focus of this story points to the company itself, which remains silent. The head of Vivotecnia, Andrés König, issued a statement when the images transcended, admitting feeling “dismayed” at the video. Little else is known. This newspaper has tried to contact him in various ways, but has not been successful. What is known, according to the Ministry of the Environment, is that the Administration is obliged to inspect laboratories of this type once a year and, in this case, there were no notable incidents.

Then something went wrong. In addition to the administrative magnifying glass, in this type of laboratory there must always be an ethical committee that monitors and inspects the work of technicians and veterinarians, who are those who handle animals. For this reason, different animal associations criticize that the Community of Madrid does not seize the animals and that they remain inside the laboratory. “How can it be that the abusers themselves are taking care of the victims?” Complains Arantza Sanz, a lawyer for the Society for the Protection of Animals and Plants of Madrid. The regional government assures that he is tied hand and foot. “The legislation says that we can only seize if there is a very serious case of risk of life for the animals,” he explains. And he reassures: “They are all fine. Nothing to do with the images ”.

That this is a ruse to hide evidence is another matter, say the animalists, who do not trust the messages sent by the Administration. In fact, the AnimaNaturalis associations and the Foundation for Advice and Action in Defense of Animals (FAADA) have announced that they will appear in the cause. The Pacma party did it last Sunday.

While in social networks the woman who recorded the images is praised (or criticized), the villains, embodied in workers and former employees of the company, have also been sought out. One of them, hired as a caretaker of the animal facility until 2017, asks to remain anonymous and shows messages received on his LinkedIn account: “You didn’t do anything for the animals, you bloody repulsive killer.” He says that he has reported him to the Civil Guard because they have even told him to take care of his family “and I can’t even sleep,” he says. The company, he says, has advised all workers to leave social networks or disassociate themselves from Vivotecnia. But the harassment goes further. “They call me at my house and accuse me of being an accomplice.”

This person assures that, in the years prior to the recordings, he never saw something like what appears in the video because “he would have reported it immediately.” He also notes that some procedures can be questionable. The dogs never go out for a walk, “they are taken out twice a day to clean the cages, but they go from one closed place to another”, and they are labeled on their foreheads when they are perfectly distinguished. “There were two, a male and a female. It was not necessary”.

Vivotecnia was born in 2007 and moved two years later to the facilities in the Tres Cantos Science Park. It is an organization dedicated to contract research for pharmaceutical and biotechnology companies. The company carries out toxicity tests for the cosmetic, chemical, agrochemical, biocide and health product industries and has around 170 workers distributed among those in charge of caring for the animal facility, laboratory technicians and veterinarians.

While this Saturday the demonstrations calling for the closure of the company multiplied in different Spanish cities (Madrid, Almería, Zaragoza, Girona …) and there are more summoned this Sunday (Bilbao, Barcelona, ​​Valencia …), the case has peppered the central government. The Higher Council for Scientific Research (CSIC) or the National Center for Oncological Research (CNIO) have contracted the services of Vivotecnia, and the Minister of Science and Innovation, Pedro Duque, was forced to tackle the issue on Friday. Duque argued that to change national legislation there would have to be a “general problem”, something that, in his opinion, is not currently the case. The director general of Animal Rights of the Ministry of Social Affairs, Sergio García, thinks it would be necessary install video surveillance systems in these spaces.

🔴 After the cases of animal abuse that occurred in the Vivotecnia laboratory, today @SergioGaTorres , Director General of Animal Rights, has announced the proposal to include video surveillance cameras in all animal experimentation laboratories in the country. 👇 pic.twitter.com/zcWR1zTgnE

The Vivotecnia website – closed after the scandal – was shown as a model company with state-of-the-art facilities for primates “that exceed the required standards of animal welfare.” It boasted of having adjacent capture mechanisms to allow for animal observation and environmental enrichment, “including forage, toys, swimming pool, television, swings, or the use of positive reinforcement.” This idyllic description contrasts with the image of the beagle that appears in the video lying on the floor of a room, without beds or toys, and surrounded by blood.

The doctor listed foods that are good for the intestines

100 years of the DRK: From a medical association to an aid organization