Violence in South Africa: the army prepares a massive deployment of troops and there are already at least 117 dead 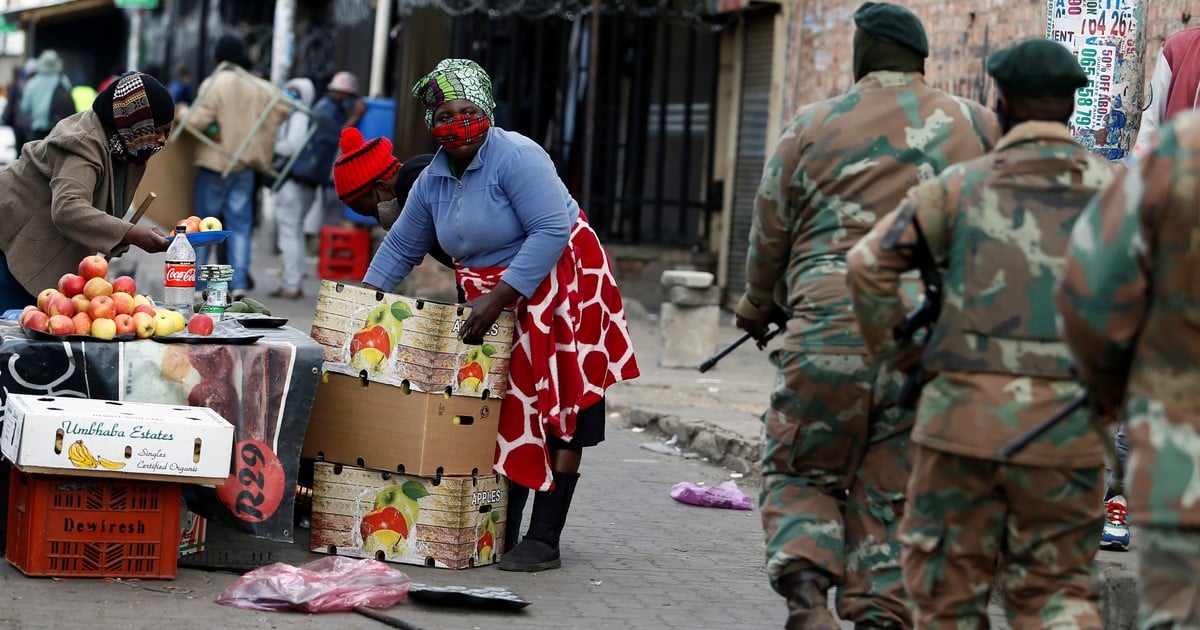 The violence that started a week ago in South Africa caused at least 117 deathsannounced this Thursday the government, which is preparing a massive deployment of troops to contain this social outbreak that threatens to cause shortages of food and essential products.

The situation in Johannesburg, the economic capital of South Africa, was in “relative calm”, while the province of KwaZulu-Natal (east), the epicenter of violence, “remains volatile”Acting Minister of the Presidency Khumbudzo Ntshavheni said at a press conference.

In that same appearance, he indicated that the death toll since the start of the protests rose to at least 117 people26 of them in the region around Johannesburg and 91 in the KwaZulu-Natal province, home to the Zulu ethnic group.

In addition, 2,203 people have been arrested in these days.

Soldiers on the streets of Johannesburg. AP Photo

The protest started after the imprisonment of the former president Jacob Zuma, an ethnic Zulu, sentenced to 15 months in prison, but quickly turned violent, also fueling social frustration over the economic crisis and the coronavirus pandemic.

The ministers of Defense, security and Police, as well as the main generals of the army, they were sent to the Zulu province to try to control the situation, especially in its big cities like Durban or the capital Pietermaritzburg.

On Wednesday, the government assured that it would mobilize 25,000 army personnel, ten times the number initially deployed.

“All reservists must report in front of their respective units at first light tomorrow, July 15, 2021, “said Army Chief Lieutenant General Lawrence Mbatha in an order issued Wednesday night to Thursday.

According to Minister Ntshavheni, “in the morning, 10,000 troops were already on the ground. “

Shops and warehouses in Johannesburg and in the province of KwaZulu-Natal were looted and destroyeds. Distribution and transportation chains were hit, which is affecting the distribution of goods and services throughout the country.

The consumer goods regulator calculated that more than 800 businesses have been looted.

President Cyril Ramaphosa warned that parts of the country “could soon face product shortages basic due to the interruptions in the supply chains of food, fuel and medicines “.

Troops in the streets. Reuters photo

In Johannesburg, with the situation calmer, volunteers participated in clean-up operations in the city. Also there were lines to buy food and other essential products in a shopping center that had been saved from looting and where twenty soldiers were patrolling.

A community leader from the Soweto neighborhood, Musa Mbele-Radebe, 30, celebrated the deployment of troops while helping clean up the Jabulani Mall.

“Our people are quite scared with the army compared to the police. It only took four soldiers to control a situation of a thousand people concentrated in this center, “he said.

The images of vandals loading refrigerators, televisions and boxes of food and drinks have been a shock to many South Africans.

A group of minibus operators armed themselves on Wednesday with sticks and guns and brutally beat suspected vandalism in the town of Vosloorus, southeast of Johannesburg.

On the other hand, the Minister of Police, Bheki Cele, reported 20 deaths in Phoenix, a municipality near Durban, where members of the Indian community took justice against suspected vandals on their own.

Bheki Cele warned that “racial tensions have clouded these problems“in Phoenix, where some groups were trying to” protect their neighborhood from looting. “