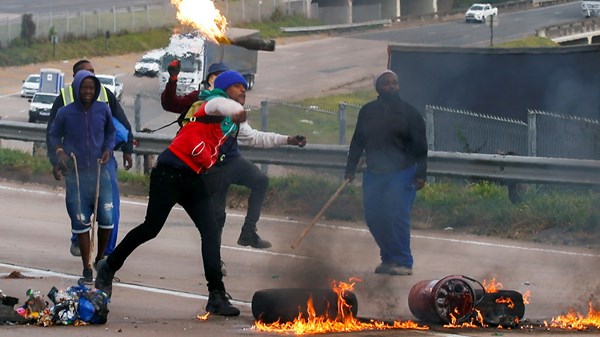 Violence escalated, shops were looted, a section of a highway was closed, and stick-wielding protesters emerged Sunday in Johannesburg, South Africa’s economic hub, following the imprisonment of former president Jacob Zuma.
It was Zuma’s home province of KwaZulu-Natal that witnessed the most violence and is where the former president began serving a 15-month prison sentence for contempt of court on Wednesday evening.
South African President Cyril Ramaphosa said on Sunday that there was no justification for violence and that the unrest was “damaging our efforts to rebuild the economy” amid the COVID-19 pandemic.
“While there are now people who have been hurt or people who are angry, there is no justification for such violent, destructive and disruptive actions,” Ramaphosa added.
Zuma’s sentencing and execution was seen as a test of the government’s ability to enforce the law in a post-apartheid era even on powerful politicians, 27 years after the African National Congress overthrew a white minority rule and ushered in an era of democracy. But Zuma’s imprisonment angered his supporters and exposed divisions within the party.
Police said some criminal elements are taking advantage of the anger some feel from Zuma prison to steal and cause damage.
The National Intelligence Service warned that instigators of violence could face criminal charges.
The agency said, in a statement, that 62 people had been arrested in KwaZulu-Natal and Gauteng, where Johannesburg is located, since the violence began.
Police in Johannesburg said they had also received reports of gunshots being fired at passing vehicles on a highway.
The court had sentenced Zuma to 15 months in prison for refusing to implement an order from the Constitutional Court last February to provide evidence for a corruption investigation during his nine-year rule until 2018.
Zuma has filed an appeal against his ruling before the Constitutional Court on grounds including his deteriorating health and the risk of Covid-19 infection, and the appeal will be heard on Monday.