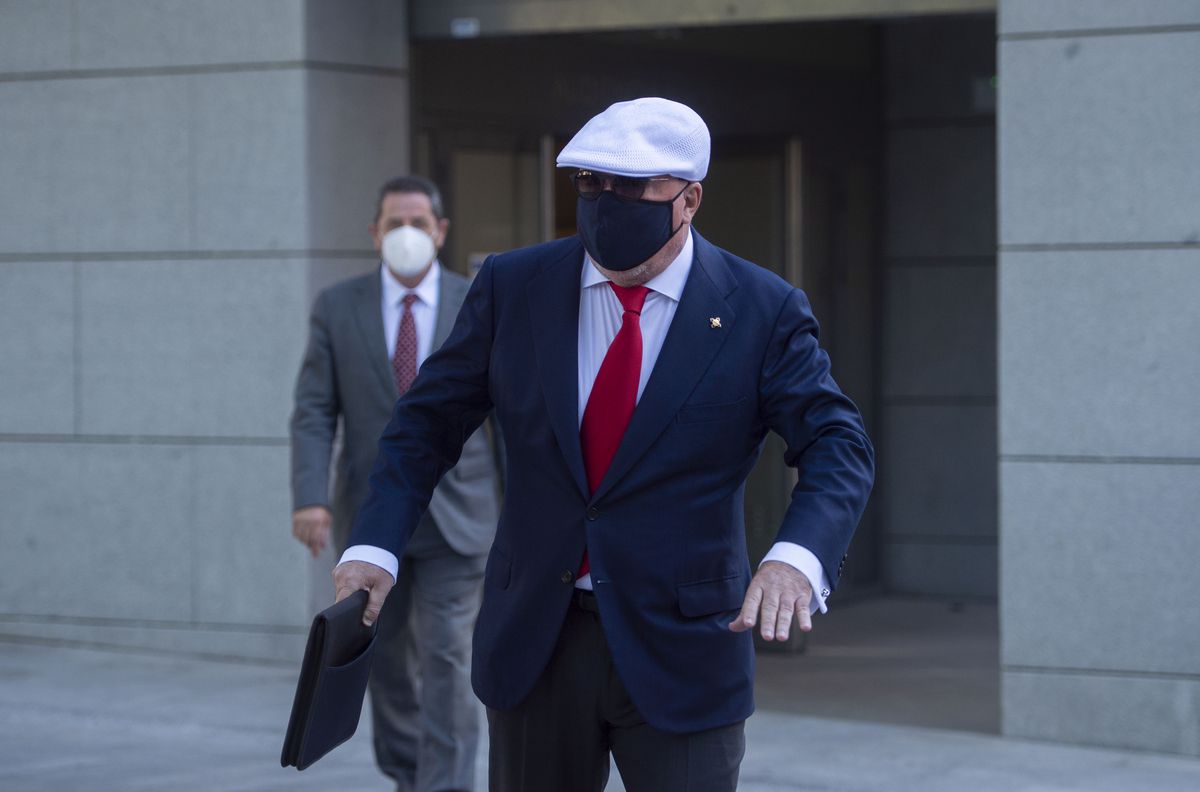 Retired commissioner José Manuel Villarejo has returned to the National Court this Thursday to testify for Operation Kitchen and, without departing from the script, has once again implicated María Dolores de Cospedal, former secretary general of the PP, in the illegal deployment to spy on the former popular treasurer Luis Bárcenas, started in 2013. As the former police officer has detailed, he had an old relationship with politics – at least it dates back to 2009, according to the evidence in the summary – and they met on many occasions. “Many, it is not known [cuántas]”Villarejo responded to journalists upon leaving the judicial body. Before, sitting before the magistrate Manuel García-Castellón, he has elaborated more and has assured that his meetings with the former conservative leader were not limited to appointments at the national headquarters of the party on Genova Street, as she asserted, but also They happened in several restaurants and in his office in the Ministry of Defense when he held that portfolio, according to legal sources present in the interrogation.

The target has remained very high throughout Villarejo’s statement, which has pointed to former president Mariano Rajoy himself as a connoisseur of the espionage operation against Bárcenas. As he told the judge, he informed him by sending messages to his mobile phone: “I had a personal interest in this issue.” On May 27, in his appearance before the investigation commission of Congress, the commissioner already pointed out the former chief of the Executive in a testimony that precisely caused this summons before the investigating magistrate. But now, as then before the deputies, the policeman has not provided evidence and has limited himself to committing to “look for it.”

Villarejo’s new statement at the National Court came days after the retired commissioner submitted a brief to García-Castellón, in charge of the investigation of the Kitchen case, where he presented himself as a simple secondary actor and anticipated the content of his accusations, including those related to Rajoy and Cospedal. In that letter, Villarejo also pointed out his intention to talk about the so-called Operation Catalonia, the information intoxication campaign supposedly gestated within the Ministry of the Interior through the call political brigade in order, through alleged police reports with serious accusations of corruption, to discredit the main leaders of the Catalan independence movement. According to legal sources, his testimony has followed that script.

Asked by the judge if he recognized as his the agendas that were intervened in his home last October, when he was still in prison, and that has caused a turnaround in both the Kitchen case As in a dozen other pieces of the summary in which his allegedly criminal activities are investigated, the commissioner has not been forceful and has limited himself to affirming that he believed that it was his handwriting. However, he has refused to answer questions about them until “he had a copy of them”, after complaining that he had only been able to consult them so far in court.

About Cospedal, Villarejo has affirmed that he met her after his arrival at the general secretary of the PP, after the party’s congress in Valencia in 2008, and that it was through her husband, the businessman Ignacio López del Hierro, also accused. The commissioner has assured that they presented him as “a former policeman who knew everyone”, although he was active at the time. Since then, he has stated that he met with her on many occasions, including in the office he held in Defense when she took charge of this portfolio between November 2016 and June 2018. The last appointment took place “a few days before ”his arrest, in November 2017.

According to the policeman’s version, in those appointments he informed Cospedal of both Operation Kitchen and other activities. But, he added, they never made him “professional assignments” and “never” paid him. “There was a bit of everything,” he said. It is at that moment when the police officer has spoken of his alleged participation in Operation Catalonia, in which he assures that he was personally involved, but that the Ministry of the Interior did not pay him the expenses he had. Until now, neither Judge García-Castellón nor the Anti-Corruption Prosecutor’s Office have wanted to delve into this operation, from which numerous references have emerged during the investigation, considering that it does not fit into any article of the Penal Code.

Regarding the espionage of Bárcenas, Villarejo has assured, as he did in Congress, that his participation was limited to “intelligence work” to try to locate compromising documents for the PP that the ex-treasurer might keep. The commissioner has again admitted that it was he who convinced Sergio Ríos, then the driver of Bárcenas, to collaborate in the operation, but he has distanced himself from one of the illegal actions of the operation: entering a workshop of Rosalía Iglesias, wife of the former treasurer, to steal documents. He has admitted that he knew of the existence of a Colombian inmate, a partner of Bárcenas in the Soto del Real prison (Madrid), who was supposedly going to erase documents that he kept in the cloud [memoria virtual]. All this, he insisted, he did at the request of his superior in the Police, the then Deputy Director of Operations, Commissioner Eugenio Pino, after he was summoned to a meeting for it by the then head of the Corps, Ignacio Cosidó, who until now has not been charged or called to testify by the judge.

Villarejo repeats that, regarding all his efforts, he made “intelligence notes” [documentos internos policiales] that he transmitted to his commanders, who asked him about them. They weren’t the only ones. The commissioner has declared that he also reported “something” to the PP. “Sometimes, Cospedal told me that the President was very worried,” he said before adding that, when he spoke with the former popular leader, he was convinced that she was doing it “more as a government than as a PP.” Regarding his alleged contacts with Rajoy, the commissioner has repeated the version he gave to the deputies. According to this, “the president did not quite trust the information that came to him from the minister [Jorge Fernández Díaz, imputado en la causa] and I wanted another way of information ”. As he explained, at first he sent that information to Rajoy through Cospedal and “some link” of the then vice president, Soraya Sáenz de Santamaría, but finally they provided him with telephone numbers so that he could communicate it directly. , through messages, to the then Prime Minister.

The commissioner has also taken advantage of his statement to support the version offered last Monday by the former head of the UDEF, Commissioner José Luis Olivera, on the alleged pressure and attempts to bribe him suffered by Chief Inspector Manuel Morocho, responsible for the investigation. of Gürtel case. He denounced the judge that Olivera, who had been his boss at the UDEF, offered him a position at the Spanish embassy in Lisbon in 2013 to get him out of the investigations on box b of the PP, but that he rejected it. Olivera denied this and insisted that it was Morocho who asked him to help him get that position. This Friday, Villarejo has endorsed this latest version and has assured that he made “arrangements” so that the chief inspector “had a better destiny” within the Police.