Video: this was the moment the bridge fell in Mexico City, leaving at least 23 dead 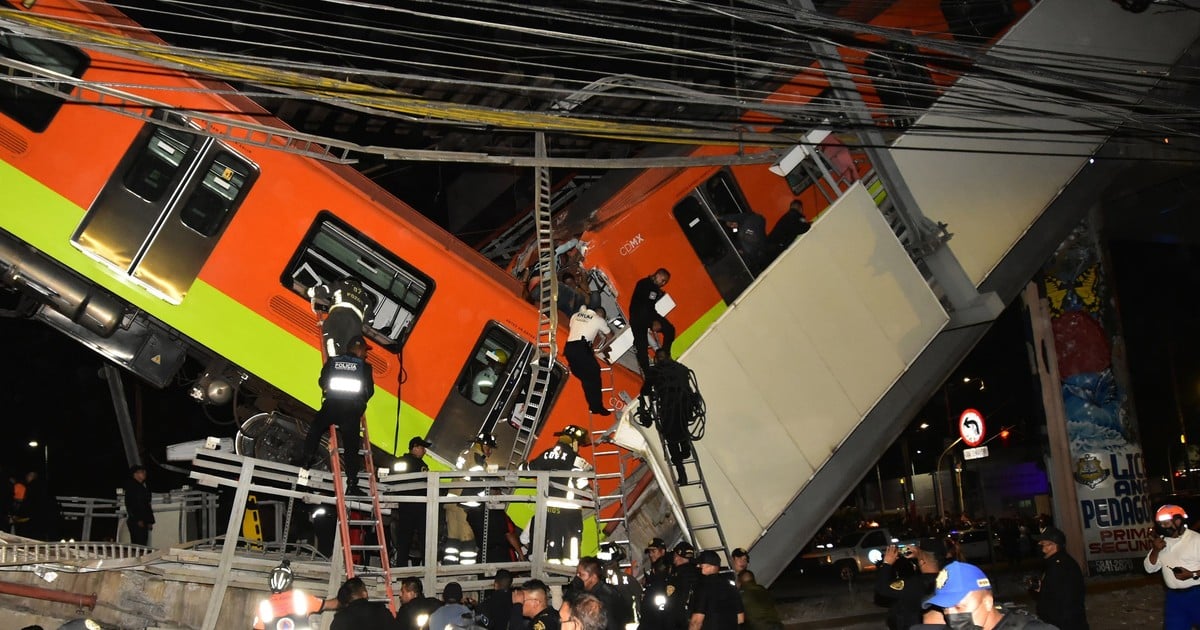 As the early hours of Tuesday progressed in Mexico, some went to sleep saddened and others toured hospitals in search of relatives who were traveling in wagons on Line 12 of the subway, which on Monday night collapsed on an avenue in the country’s capital. and left at least 23 dead.

The images broadcast are shocking: a large number of cars were driving under the bridge when, unexpectedly, it collapsed completely as the train passed over it.

Witnesses in the area they said they heard a great crackle, like thunder, when a trab was defeated just as a train passed. A car was trapped underneath with a couple inside. The structure was about five meters high above the avenue.

The accident happened around 10:30 p.m. and left at least 23 dead and 70 injured, reported the mayor of Mexico City, Claudia Sheinbaum. About five hours later, the number of hospitalized rose to 65, seven of them were in the operating room in serious condition. Among the deceased were minors although the authorities did not specify the number.

Image taken with a drone where the structure of an elevated section of the Line 12 subway collapsed causing the collapse of a train carriage, in Mexico City. Photo: Xinhua

Sheinbaum asked “not to speculate and wait for the expert reports to find out what happened”, but guaranteed that a “deep” investigation would be carried out to determine responsibilities. “If an external expertise is necessary, it will also be carried out,” he said. Later, it was reported that the operation of the line would be completely suspended and almost 500 buses would be offered as an alternative transport for the citizens. The avenue on which the west occurred it would also remain closed.

In the first hours after the chaos, President Andrés Manuel López Obrador did not make any statement, sparking criticism from hundreds of users on social networks.

In a matter of minutes, the area around the Olivos station was filled with ambulances, rescuers, fire trucks, patrols from the National Guard, the army and the Navy. Hundreds of people were milling around nervously, including family and friends looking for loved ones who had not arrived at the house at the scheduled time and used that line. At the top, you could see the wagon totally split.

Rescuers try to remove one of the victims from inside the Metro that collapsed in Mexico City. Photo: AFP.

At midnight the rescue was temporarily interrupted because the train was “very weak” and there were still people inside, although it was unknown if they were still alive. Work resumed when a crane arrived to secure the train and prevent it from falling over.

Security forces from all levels of government collaborated in the operation while the city government set up a command center to inform family members and had put up a fence so that no one came near.

As the hours passed, despair grew as authorities worked to identify the victims. Some lists of injured and transferred to hospitals were published over the hours on the authorities’ social networks, but several relatives of people who apparently were traveling in the subway could not find their loved ones. Many posted photos on social media hoping to get a clue; Others went from one hospital to another and were shown by various images on local television channels outside the clinics as they yearned for information.

The Mexico City Metro, one of the largest and busiest in the world, had at least three serious accidents since its inauguration half a century ago.

A car completely crushed after the collapse of the structure of an elevated section of the Metro Line 12 in Mexico City. Photo: Xinhua.

In March of last year, a collision between two trains at the Tacubaya station, he left a passenger dead and injured 41 people.

In 2015, a train that did not stop on time crashed into another at the Oceania station, injuring 12 people, in what authorities called after a “double human error.”

The most serious accident was a crash at the Viaducto station in 1975, there were 31 dead and more than 70 injured, according to the newspaper The universal.

The Provincial Council will double its sponsorship if Málaga is promoted

Around the World: Situation of Migrants in Europe and on the Southern Border of the United States.

While the US grew, Europe contracted 0.6% during the first quarter of 2021