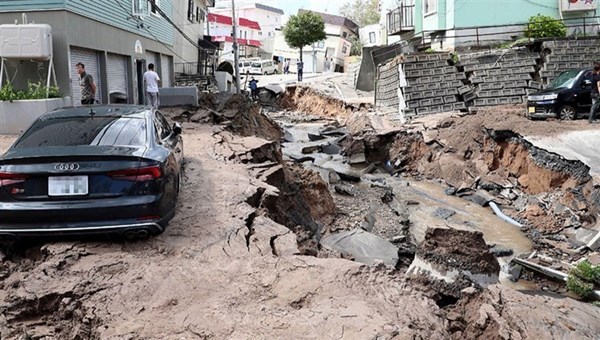 An earthquake struck the northeast of the country today, Saturday, and hit areas devastated by the 2011 earthquake, the Japanese Radio and Television Corporation said, adding that it caused a tsunami of a meter high.

The Japan Meteorological Agency said the quake struck the coast of Miyagi Prefecture at 6:26 pm (0926 GMT), with a magnitude of 7.2, with its epicenter at a depth of 60 km.
The broadcaster said that the Tohoku Electric Power Company had stopped the Onagawa nuclear plant and was checking for any problems.
The company said that a section of Miyagi witnessed a blackout after the quake.
It added that it is examining the condition of the Fukushima Daiichi plant, which was destroyed by a massive earthquake in March 2011, which led to the meltdown of nuclear reactors and the conduct of mass evacuations.
The Broadcasting Corporation showed footage from inside its Sendai office showing a board hanging from the ceiling shaking for 30 seconds after the quake.
About 400 kilometers south of the quake’s epicenter, the earthquake was felt in Tokyo.
The Radio and Television Corporation warned the masses not to approach the coast.

Mou: “Too bad there are no interviews with the referees, right?”

The UAE joins the Kingdom of Jordan in its “Centennial Celebration”