Video: how they shouted ‘murderer’ and ‘freedom’ at a repressor of the Castro regime in the protests in Cuba 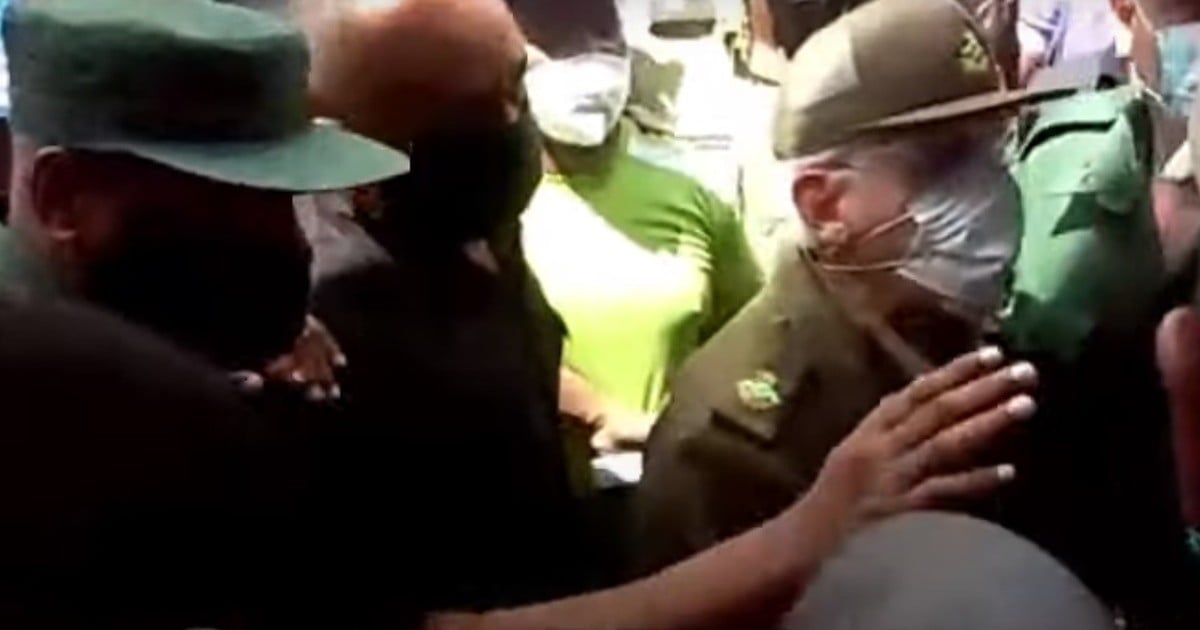 In the midst of the unprecedented protests in Cuba, it was recorded how they yelled at him in the streets “murderer” and “freedom” to the commander Ramiro “Ramirito” Valdés, one of the historical leaders and “heroes of the Cuban revolution” along with Fidel and Raúl Castro, Camilo Cienfuegos and Ernesto Guevara, among others.

For opponents of the Castro regime today in the hands of Miguel Díaz-Canel, Valdés was “a bloody repressor” who today is linked to the feared squad of “black berets” that came out to repress the demonstrations.

The almost ninety-year-old Valdés – as a member of the old revolutionary guard (he was Ernesto “Che” Guevara’s second in a guerrilla column and later led his own) – came out in support of Castroism after the protests broke out in Havana.

According to the international agency EFEValdés – targeted by the dissent as a “repressor” – moved to eastern Cuba, the cradle of the “Cuban revolution” and also the epicenter of the current social emergence.

The Santiago town of Palma Soriano was precisely one of the first points where protests broke out on Sunday, and Valdés went there, 88 years old, who according to state media controlled by the Cuban regime “as soon as he broke into his glorious olive green uniform was acclaimed by the people. “

The images that emerged before his arrival in the area, however, showed another panorama. “Ramiro is a murderer”, “Ramiro, they are starving us” and “go away” is heard among the unthinkable shouting on an iron island to control any glimpse of freedom of expression.

“The Hero of the Republic of Cuba, the Moncadista, an expeditionary from Granma and invader from Che Guevara’s columnHe addressed everyone, was interested in their concerns and after reiterating that even in these hard times the Revolution did not abandon its children, did it ask them to go home, and that is how it happened without delay, “says the official chronicle, although – reported EFE – There are no videos available to illustrate the story, quite the contrary, in fact.

The protests on the island

The protests began this Sunday when thousands of Cubans took to the streets in Havana and other parts of the island to protest shortages, high food prices and power cuts.

In the exhaustive biography of Ernesto Guevara written by the American journalist Jon Lee Anderson It is mentioned that “Ramirito” was the trusted lieutenant of “Che” and that, according to Guevara, he resembled Félix Dzerjinski, the founder of the KGB.

The current protests in Cuba could make history, since it is the first time that a large group of Cubans have taken to the streets to protest against the regime since the famous “Maleconazo” of 1994.

“As if pandemic outbreaks weren’t around the world, the Cuban-American mafia, paying very welln, on social networks influencers and youtubers has created a whole campaign … and has called for demonstrations throughout the country, ” said President Miguel Díaz-Canel.

From Granma, the official media of the Castro regime, they maintained: “There were riots with the presence of criminal elements that our people reject, and they have tried to manipulate people and generate pseudo-movements in order to form a political opposition. “

After the protests and repression in Cuba, President Alberto Fernández considered that “these things have to be resolved by the peoples” and said he did not know “the dimension of the problem” in the Caribbean island, although he was very critical of what he considered an economic blockade to Cuba from the United States.

“In the G20 I asked that the blockades in the world be ended. The one who suffers it is not a government, but the people. In the midst of a pandemic, maintaining blockades is the least humanitarian thing that exists,” said Fernández and was interpreted on the island as a support to the regime.