Video: attraction fell from a height of 24 meters in an amusement park 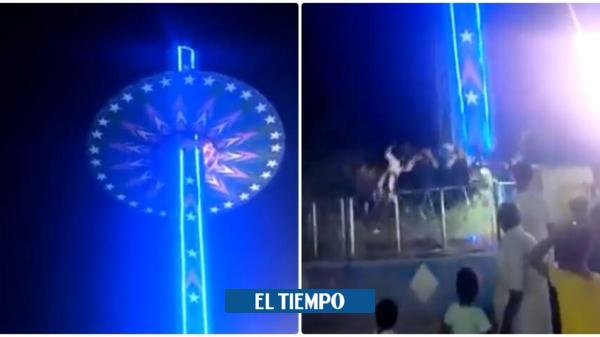 About 50 people panicked when the ride they were riding at an amusement park in the Indian city of Mohali fell from a height of 24 meters.

The authorities launched an investigation to clarify what happened.

Although no human lives were lost, all the occupants suffered injuries of a different nature. The injured, including many children, were taken to the nearest medical center shortly after the incident and the families of the victims demand that the amusement park bear the costs of medical care.

One of the people who were affected by the incident would be in a serious state of health, according to the Indian media ‘News 18’.

(You may be interested in: Child suffers serious accident in Warner theme park).

The mechanical game is about a spinning wheel where people sit and, through a 24-meter vertical structure, it rises to the top and then falls in sections while it spins, until it comes back down in a controlled manner.

However, the witnesses said that the wheel, when it was at the top, had started to turn, but the vertical structure tilted slightly, and then the seats dropped without braking. According to preliminary tests, the brakes would have failed.

Who will be held responsible for the incident?

Local journalist Nikhil Choudhary, from the ‘TV9 Bharatvarsh’ channel, was the one who shared and viralized the terrifying video in which it is seen how the spinning wheel of the game collapses in free fall and hits the ground hard.

Some people are even thrown out of their seats.

“Live image of the swing breaking in #Mohali phase 8, many people were injured. Around 16 women and children were hospitalized after the incident”, Choudhary wrote in a tweet.

(We recommend you read: More than 150 km per hour: these are the most extreme roller coasters in the world).

Those attending the amusement park denounced that it did not have sufficient security measures and that the authorities do not want to take responsibility for what happened.

See also  A truck spills nitric acid on the AP-7, near Los Alcázares

However, no one will be saved if a mistake was made

“The park’s private ‘bouncers’ were 20 minutes late. A lady, who was the head of it, said that no one was dead. Who will be held responsible for the incident? How does this business function without the availability of medical assistance?”, one of the witnesses told the ‘ANI’ news agency.

(You can read: Disney’s largest indoor roller coaster will take you to another galaxy.)

The authorities confirmed to local media that an investigation is currently underway, which indicates that there were no irregularities regarding the permits.

According to ‘ANI’, the police chief of the jurisdiction where the events took place, Harsiman Singh Bal, assured that “they had the permission to organize the event. However, no one will be saved if a mistake was made”.

– ‘One in a million’: mom gives birth to two babies with different skin tone

– Nirvana wins the lawsuit against the boy on their ‘Nevermind’ cover