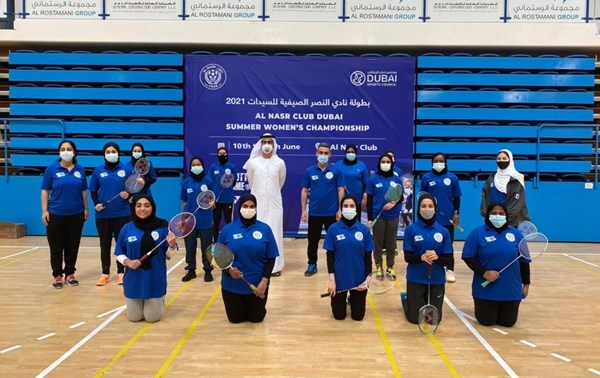 The first women’s badminton club competitions will conclude on Saturday evening, which is organized by Al Nasr Club, in cooperation with the Dubai Sports Council and the Badminton Committee of the Table Tennis Federation.

At the end of the first round of the Women’s Championship, Hind Al-Janahi, Fatima Baqer, Rawda Saeed Al-Hajri, Nuru Bwanga and Amal Youssef qualified for the final rounds.

In the doubles competitions, which witnessed the participation of 15 teams, Amal Yousef and Rawda Al-Hali from the Al-Nasr team, the players Bushra Al-Najjar and Rawda Al-Muraikhi from Abu Dhabi, and the doubles consisting of Amira Al-Balushi and Khawla Jassim from Dubai Police, and qualified for the doubles final Shamma Saeed and Hind Al-Janahi from Al-Janahi Club. victory.

The first day’s competitions, which spanned over 4 hours, witnessed more than 30 matches, each of Ahmed Al-Janahi, Executive Director of Team Games at Al-Nasr Club, Jaafar Ibrahim, Director of Game Development in Dubai, Technical Director of the Game Committee Mahmoud Tayfour, Nisreen Bin Darwish, Head of Women’s Activities Department in Al-Nasr, Supervisor of the Championship, and Suhad Owais is the coach of the Al-Nasr team, along with many of the players’ parents.