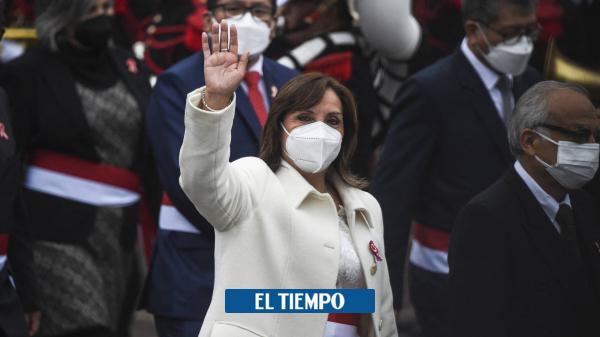 the president of Peru, Pedro Castillo, informed this Friday the elected president of Colombia, Gustavo Petro, and the outgoing one, Iván Duque, that he will not be able to participate in the transfer of command due to the refusal of Congress to authorize his trip, and that, in his place, Vice President Dina Boluarte will attend .

Through a message on Twitter, the Ministry of Foreign Affairs shared the letters that Castillo addressed to Petro and Duque to apologize for his absence at the ceremony next Sunday in Bogotá.

The head of state said that the decision of Congress “does not contradict the very high value that Peru gives to its relationship with Colombia.”

Likewise, Castillo assured that they will continue to enrich the bilateral agenda, prioritizing the sustainable development of both peoples.

On Thursday, the plenary session of Congress denied the permission that Peruvian presidents require for any trip abroad.

Some of the parliamentarians argued that there was a risk of flight, since the Prosecutor’s Office is investigating Castillo for several cases of possible corruption, and that there is “an unprecedented presidential crisis.”

(Also: Peru: what comes for the Government after the resignation of the prime minister?)

For his part, Congressman Juan Carlos Lizarzaburu, of the Fujimori Popular Force, affirmed that Castillo “will want to escape” if he goes to Colombia, for which he asked that “he send the foreign minister and he stays assuming responsibility.”

In addition, Castillo has yet to announce and take the oath, in the next few hours, of the new president of the Council of Ministers, after the resignation of Aníbal Torres.

(You can read: Peru: Castillo defends his management against the opposition in his first year in office)

From the Executive we have always respected the independence of the powers of the State. I regret that, in an unusual and arrogant way, the @congresoperu prevent me from attending an international protocol act. This fact undermines the democratic ties with the sister Republic of Colombia.

The president responded to Parliament, from his social networks, that he has always respected the independence of the powers of the State, but regretted that “in an unusual and arrogant way”, Congress prevented him from “attending an international protocol act”.

Castillo added that “this fact dents the democratic ties with the sister Republic of Colombia.”

The Minister of Foreign Relations, César Landa, had expressed himself in the same sense, who urged Parliament to reverse this decision, which, he assured, “recalls into question” the international image of Peru.

See also  Video of plane landing on US highway in flames

“Our international image is once again called into question by not authorizing the President’s trip to the transmission of command in Colombia. I call on the congressmen, who on other occasions have reversed decisions to honor Peru’s international commitments,” Landa said in Twitter.

Shooting in the United States: they close a shopping center in the face of the emergency

China suspends several cooperations with the US and sanctions Pelosi