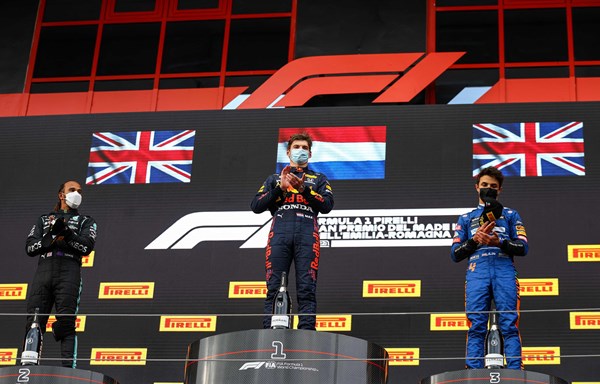 Imola (dpa)
Max Verstappen, the driver of the Red Bull team, was crowned the Emilia-Romagna Grand Prix in Italy, which was held today in the Formula 1 World Championship, and the race was in turmoil and red flags were raised after a strong collision.

British star Lewis Hamilton, a Mercedes driver, who has won the seven-time World Championship, regained his balance largely to finish the race in second place, after his car skidded off the track and dropped to ninth place. McLaren driver Lando Norris also made a strong bid to clinch third place, noting that he started the race from seventh and Verstappen made a strong start from third place, and succeeded in overcoming his colleague Sergio Perez to enter a challenge with Hamilton at the top. A crash occurred between Hamilton and Verstappen, and Verstappen was able to proceed, but Hamilton’s car was damaged in the front part, and the fierce competition between Hamilton and Verstappen continued after entering the safety car on the second lap, after which Hamilton’s car went off the track, but he did not lose much, as he was exposed His teammate Valtteri Bottas and Williams’ driver George Russell also had a major collision, and the red flags were raised for about half an hour. Verstappen did not suffer from any problems upon the resumption of the race, and continued to excel until he achieved his first victory of the season and the 11th in his career in Formula 1, while Hamilton struggled to claim second place despite his significant decline in the accident, and the World Championship competitions resumed by holding the Portuguese Grand Prix on the second of the day. Next May.