‘Vaxxie’, the selfie of your vaccination: tell me how you get vaccinated and I’ll tell you who you are 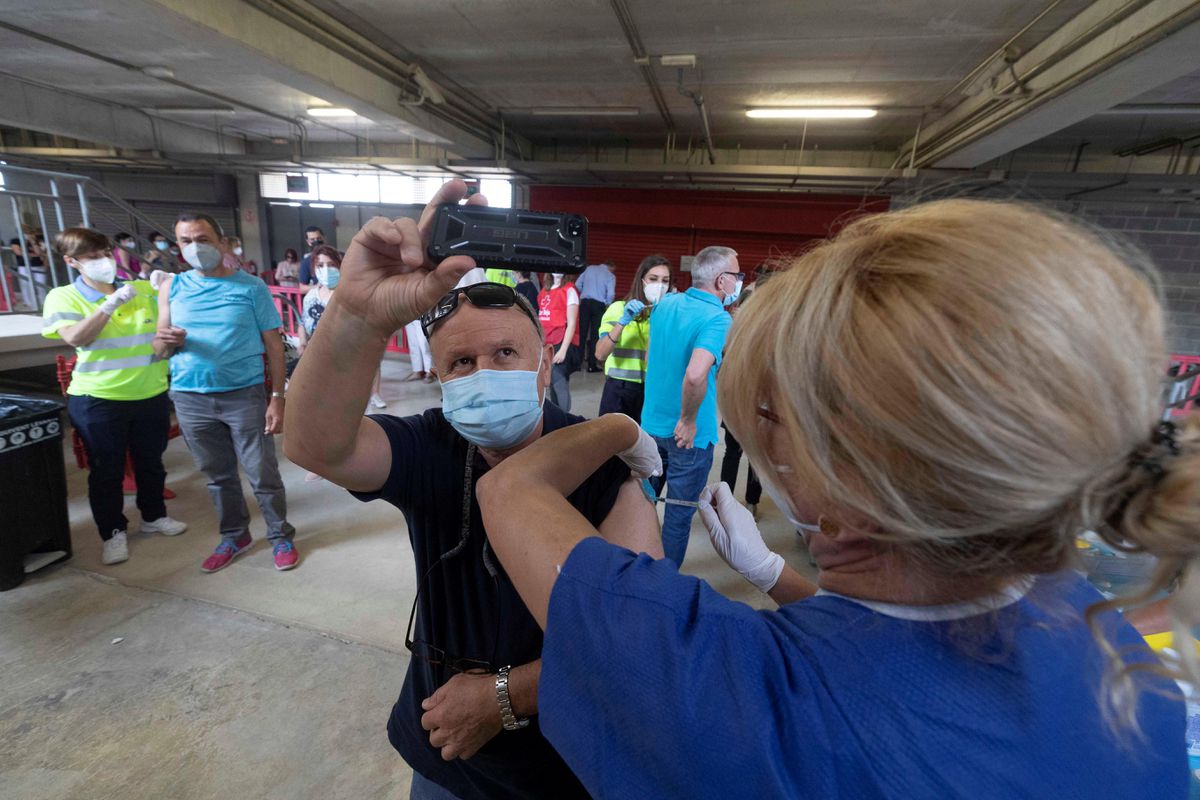 With 40% of the Spanish population already fully vaccinated and another important percentage half inoculated, one thing has become clear: the day of the puncture is much more than a medical procedure. In the networks, many are photographed in the trance. The selfie with the arm at the ready is called vaxxie, from “selfie” and “vaccine” in English, and sharing it seems almost mandatory, almost always applying another layer of symbolism to that moment.

At the beginning of the year, when the vaccinated were elderly or health workers, it was usually the family members who made these images rotate on networks, taking the opportunity to praise not only the grandmother or the nurse cousin, but also their entire group of resilient people. Later it was the protagonists themselves who were marking the moment in parts. First the appointment to be vaccinated, then the fact itself. There are those who dedicate it, as if it were a goal or an Oscar, and who underline the political intentionality of their vaxxie, going to the center with a t-shirt in defense of public health or giving it a patriotic tone, celebrating with red and yellow emojis. In the race for vaccination, some follow the percentages of each country as if it were the European Championship.

Rituals create community and help us to explain ourselves, they have advocated from Pascal to Byung Chul-Han or Hartmut Rosa, and the covid vaccination has been intuitively understood as a great collective liturgy, an important step that is taken to overcome the collective nightmare, but that each one re-signifies in their own way. “Is a performance individual, but which contributes to a larger whole, to a performance collective. It means feeling part of history, mapping the progression of vaccination and taking a position in the political dispute ”, summarizes Marcela Fuentes, professor in the Department of Performance Studies at Northwestern University, in the United States, and author of the book Technopolitical activisms (Eternal Cadence). Fuentes believes that the creation of a story about the vaccine is due to the fact that “we are beings of stories and beings in a mirror.” She has been able to trace how these narratives are written differently in each country.

In Argentina, where it comes from, everything starts with the appointment to get vaccinated. That is always shared with intimate groups. “The friends respond: ‘Vamooo’. And maybe saying ‘vamooo’ is saying ‘one more safe’, ‘one less to hurt’, ‘one more to fight’. It serves as a cathartic cry and, hopefully, as a memory compromise ”. Then comes the photo of the puncture, although many, including herself, have been depriving themselves of publishing it as it has been found that access to the vaccine was unequal and, therefore, could be translated into an insensitive sample of elitism, in a “ I do and you don’t ”. In Brazil, Fuentes also points out, the Bolsonaristas will never hang up their vaxxie because they don’t get vaccinated and, if they do, they don’t count it. “There he played the issue of religion and the cynical stance in the face of death. There is, on the one hand, an instrumentalization of death in a Darwinian tone that goes hand in hand with the ideology of white supremacy and patriarchal. And, on the other, a speech with a fundamentalist pseudo-religious tone that demands not to fear superior designs ”.

In the United States too, getting vaccinated, and telling about it, is politicized. There it was Joe Biden, Kamala Harris and all the living former presidents – except Donald Trump – who were first pricked in public, following a tradition of exemplary vaccination that was already seen with Gerald Ford in 1976 and Barack Obama in 2009. Even Elvis Presley was inoculated in 1956 against polio before the cameras. “Photos of leaders getting vaccinated are considered good practice,” explained David Broniatowski, Professor of Applied Science at George Washington University, in an article by The New York Times. “If you see an elected official acting as a guinea pig voluntarily, in your subconscious you start thinking, ‘Oh, maybe I should do it too.’

There, immunization, like the use of a mask, divides the country into two halves that are also geographical (the states of Mississippi, Louisiana and Alabama, southern, rural and religious, lead the ranking fewer vaccinated). “In an ideal world, the call for the vaccine would be a nonpartisan public health issue, but it is,” confirms Deen Freelon, a communicative theory researcher and expert on “clictivism” or network activism. Freelon believes that vaxxie It counts as a political pronouncement, even if the person who posts it doesn’t understand it that way. “Ultimately, the goal is to encourage others to get vaccinated through peer pressure, under the assumption that others will do something if they see their family and friends doing it.”

Anti-vaccines are not only found in Missouri or Brazil. In Spain, last week, the deputy of Vox Macarena Olona posted her corresponding photo at the Zendal Hospital in Madrid. Dozens of his followers felt betrayed: “Complying with globalism, the 2030 Agenda and obeying Sánchez,” wrote one. “What a huge disappointment.” “Tell me how much they pay you to take this photo,” they ugly.

In addition to the symbol of rebirth and political positioning, when Pfizer, Janssen, Moderna or AstraZeneca are received – there are, by the way, products available from all pharmaceutical companies, almost always apocryphal, and they are priced well in Outlets like eBay and Etsy — it has also been given a more erotic-festive feel. He is the one that tried to invoke the Provence-Alpes-Côte-d’Azur (PACA) health organization, in France, in an institutional campaign launched this summer. The poster shows a couple kissing with the slogan: “Yes, the vaccine can also have desirable effects.” In the Anglo-Saxon press the term has been coined hot vaxx summer, the hot summer of the vaccine, to refer to the frenzy, both sexual and economic, that was expected for these months. Shar Dubey, the CEO of Match.com, a leading matchmaking site, recently told investors that he is feeling unbeatable for the season: He estimates growth this quarter of between 22% and 24% from use of its services, which would translate into benefits of about $ 260 million.

But for now, the delta variant and the alarming advance in infections among those under 35 years of age are cooling these expectations. The hot summer will have to wait for the centennials, those born in the two thousand, can make their vaxxie.