Variants of Covid: flight reductions will be from April and 20,000 more passengers could still arrive 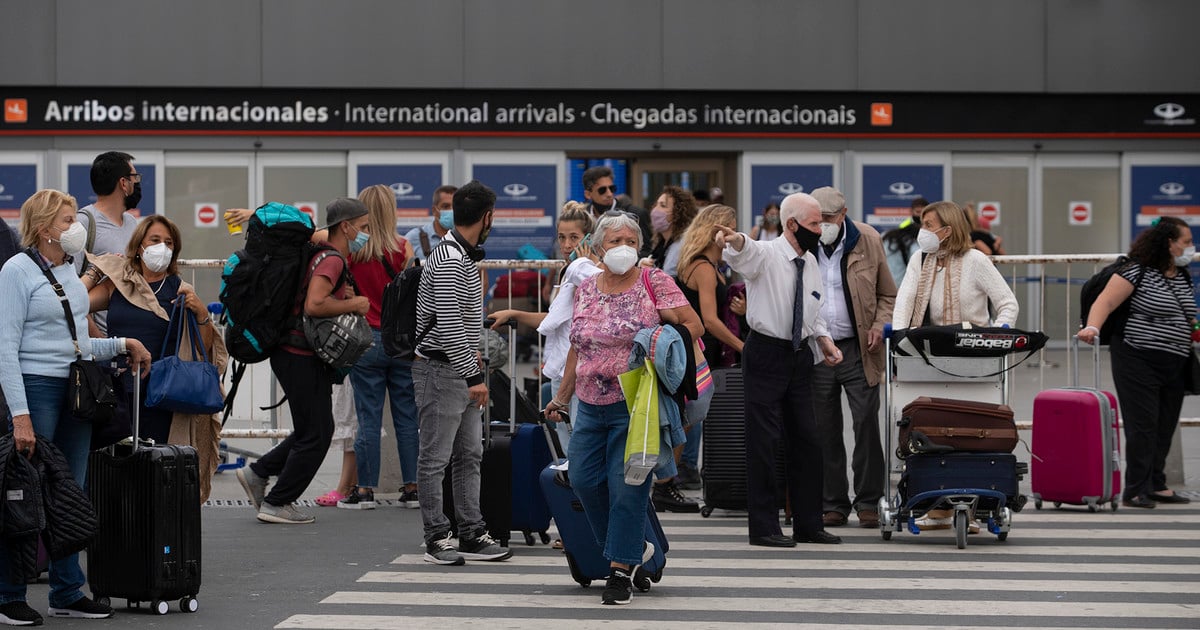 One year after the Preventive and Mandatory Social Isolation (ASPO) was declared due to the coronavirus pandemic, and the Government announced its explicit intention to discourage travel abroad to avoid the entry of new strains of Covid-19, still more than 30 flights and 2,000 passengers they enter and leave the country per day by plane.

The figures correspond to Tuesday and Wednesday, in Ezeiza, and one day after the reopening of operations in Aeroparque. They are only a “pixel” of the general photo: people with carry on that keeps traveling and coming back from abroad without the strongest restrictions already announced.

Just in 24 hours, this Tuesday, then, there was a movement of 2,289 international passengers between both airports. Of the 36 flights that day, one landed at Aeroparque, from where there were no takeoffs, with 88 passengers; Meanwhile, 16 flights arrived in Ezeiza with 1,762 passengers, and another 18 planes took off with 486 people.

On Wednesday, meanwhile, the international movement of passengers entering and leaving was similar: 31 flights, 15 that arrived in Ezeiza, none to Aeroparque, with 1,478 passengers, and another 15 that took off from Ezeiza and one from Aeroparque, with 469 people . The total is a flow of 1,947 passengers in a single day.

This weekend, the Government announced the reduction of flights from various destinations, such as Brazil and the United States. However, this drop in frequency is not yet in effect. “The announcement of this Saturday of frequency limitation applies from April, with which, any modification that may have occurred is not related to that resolution, “they told Clarion from Airports Argentina 2000.

Administrative Decision 219/2021, published on Friday, establishes the percentages by which frequencies will be reduced, but indicates that flight schedules and number of passengers that will enter the country must be determined by the National Directorate of Migration, the National Civil Aviation Administration and the Ministry of Health.

With the detection of more cases of infected abroad with new variants, the Government is studying tightening travel restrictions as a way to discourage transfers to affected countries, but still that doesn’t happen. The Minister of Tourism and Sports, Matías Lammens, after the scandal over the 44 students who returned infected from Cancun, told Clarion that it was not going to act “exhaustively” on the trips of graduates, but in general. Now Nación analyzes restrictions in this segment, but everything is in “we will see.”

Thus, if there are no restrictions that take effect before and if the passengers themselves do not give up traveling, a estimate calculation carried out by this newspaper based on the average arrivals of the last two days would show that in the 13 days remaining until the end of this month another 20,000 people from abroad could arrive in the country.

Meanwhile, from the Province of Buenos Aires they ask for more restrictive provisions to stop the advance of the new variants, especially from Brazil: the head of advisers to the provincial Ministry of Health, Enio García, demanded this Wednesday to close the border.

This Monday at noon, in a meeting held by the Minister of Health, Carla Vizzotti, and the Chief of Staff, Santiago Cafiero, at the Casa Rosada, they studied possible new measures. You think of force to pay for PCR tests and also hotel stays to quarantine those who travel. There is no news and the average number of flights taking off and landing at these international airports would appear to be the same as at the beginning of the week.

The “top 10” of the destinations from where more passengers arrived between Monday and Wednesday are Santiago de Chile, Asunción, Miami, Montevideo, Lima, Panama, Bogota, São Paulo and Paris. Regarding the frequencies (departures and arrivals), in the last three days there were 14 flights with Chile, 12 with Paraguay, Miami and Montevideo, 5 with Lima, 4 with Paraguay, 3 with Bogota, Madrid and Brazil, 2 with France and 1 with Bolivia.

At the end of this note, a flight from France, two from Cancun, one from Chile, another from Miami and two from Brazil were expected to land on Wednesday. And the takeoff of one to Brazil, another three to Chile, one to Madrid, another to Paris, one to Frankfurt, and another to Lima.

While, Jorge Newbery Airport is progressively adapting to operate within the framework of the pandemic with strict sanitary protocol measures after the reopening of operations, which began on Monday.

According to the data provided by Aeropuertos Argentina 2000, the movement forecast for Aeroparque in March is 118 daily flights, 114 domestic and four international, which represents 50% of what was registered in March 2020, if one takes into account that on the 19th of that month the restrictions imposed by the Government against the pandemic came into effect. In March of last year, the movement was 237 daily flights, of which 227 were domestic and 10 international.

For those who arrive at Aeroparque on a flight, after removing the luggage, if they had it, those who live in the City of Buenos Aires must undergo the mandatory testing, for which they must move to the places installed by the Government of the City to complete the process.

A sanitary truck has also been arranged on the internal routes of circulation and meters later one more station, where the controls are carried out. In addition, a private testing station was set up, as in Ezeiza – where there are 25 boxes of the Buenos Aires Government for the controls – for all those individuals, whether they are travelers or not, who decide to do it by paying the 6,000 peso fee. .

Since December, the borders for the entry of foreigners have been closed, and the same happens with the land border crossings for the Argentines themselves. The only way to travel or return from abroad is by plane to one of the destinations that still have open flights.

Those who travel abroad today must sign an affidavit in which they agree to comply with ten days of quarantine when returning to an informed address. They must also undergo a PCR analysis to determine if they are contagious with COVID-19. But compliance with these provisions depends on the will of the travelers since there are no effective controls on how they carry out this quarantine.

Scarlet Nexus arrives in June, and it's getting an anime

Literature Ocean Vuong, an American, was the first of his refugee family to learn to read – Now he is an award-winning author pondering how man builds his life from the ruins

Wine surpluses caused by the crisis threaten the sector