Vaccination in the City: from tomorrow they register those over 25 years old 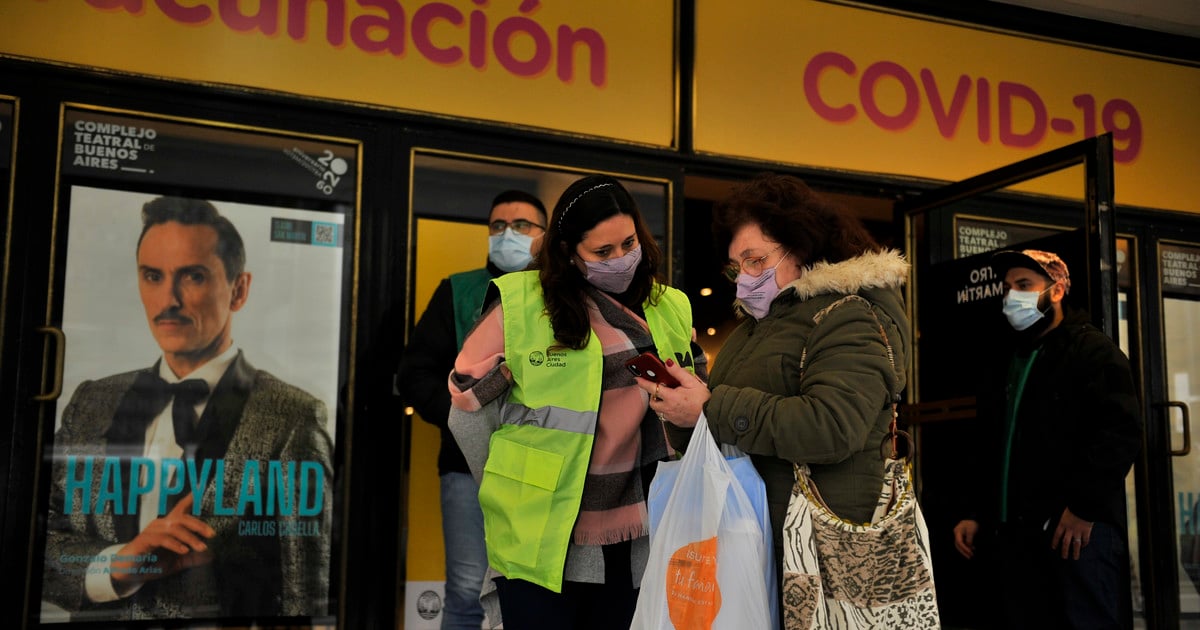 With the arrival of three batches of coronavirus vaccines this week, the City moved forward with the inoculation of the younger population, opening schemes but also completing them. During these hours, shifts began to be given to people over 45 years of age who had received the first dose of Sinopharm. less than a month ago. And this Friday morning will remain Enrollment has been enabled for those between 25 and 29 years old.

.The registration procedure is the same as in the previous stages. From 8.30 am, registration will be enabled on the page of the Buenos Aires Government, www.buenosaires.gob.ar/coronavirus/vacunacion-covid-19. Then a message is received by whatsapp or by mail in which, from a link, you can choose the time and place to be vaccinated among several options.

As vaccination advances towards the very young, a question arises. As is known, and as is the case in most of the world, young people can be more reticent. In figures from the Buenos Aires jurisdiction, the fatality rate (it is the proportion of people who die from a certain disease) in the age group of 20 to 29 years is 0.06%; and 0.01% among boys, girls and adolescents from 10 to 19 years old. At the other extreme, fatality climbs to 26.11% among those over 80 years of age; And it is 12.59% in the 70 to 79 age group.

Vaccination in the City will advance from this Friday with those between 25 and 29 years old. Photo: Lucia Merle

How was the vaccination among young adults in Buenos Aires territory? According to official data, they were registered 135,000 people who are over 35 years old and currently all have been vaccinated with first doses. Regarding the lustrum from 30 to 34, 117,000 were registered people and about 25 thousand remained to be vaccinated. The data were updated on Thursday by the Buenos Aires Ministry of Health.

In the province of Buenos Aires, vaccination is already beginning to spread to the youngest. In some municipalities they even vaccinate those over 18 years old – without comorbidities – for more than 15 days. It happens, for example, in Berazategui, where they began to send shifts at the end of June.

And on the other hand, the Minister of Health of the province, Daniel Gollán, confirmed that there are 69 municipalities that have inoculated 90% of their population; and they are the ones who began to vaccinate freely –no shift and no prior registration– to all neighbors over 18 years of age.

At the country level, according to information from the National Registry of People (Renaper) -which is usually shared by the Correntino senator Martín Barrionuevo on his social networks-, in the City of Buenos Aires 16.7% of people between 18 and 29 years old already they are vaccinated with first doses. In the case of the Buenos Aires jurisdiction, it is people with comorbidities. In the Province of Buenos Aires, the percentage is 22.6% and also includes the population without comorbidities.

According to project data from the City’s Department of Statistics and Censuses, there are about 230,000 people in the City in the 25 to 29 age group.

In parallel, this same Monday, 550 thousand second doses of Sputnik V were admitted; The City received 35,000 on Wednesday and inoculation among older adults began on Thursday. For example, from neighbors who had received the first doses in the last days of March.

With the twelve-week interval already expired, many lived the notice for full immunization as a blessing: “I am 79 years old and since day one of this pandemic I take great care of myself. I was not afraid of catching it and I did everything possible not to become obsessed. , nor get anxious, waiting for the second shift. I continued taking care of myself as if I did not even have the first dose. But now, with the certainty of being able to complete the scheme, I feel that a cycle is completed and I can end this process “, he told Clarion Isabel, a neighbor of Barracas.

According to the data provided by the Buenos Aires Ministry of Health, until the morning of this Thursday 1,703,274 people had applied a dose of the three vaccines offered in the country, which represents a 55% of the population. Of these, 427,591 completed the schematics. Are the 25% of those vaccinated and 14% of Buenos Aires residents.