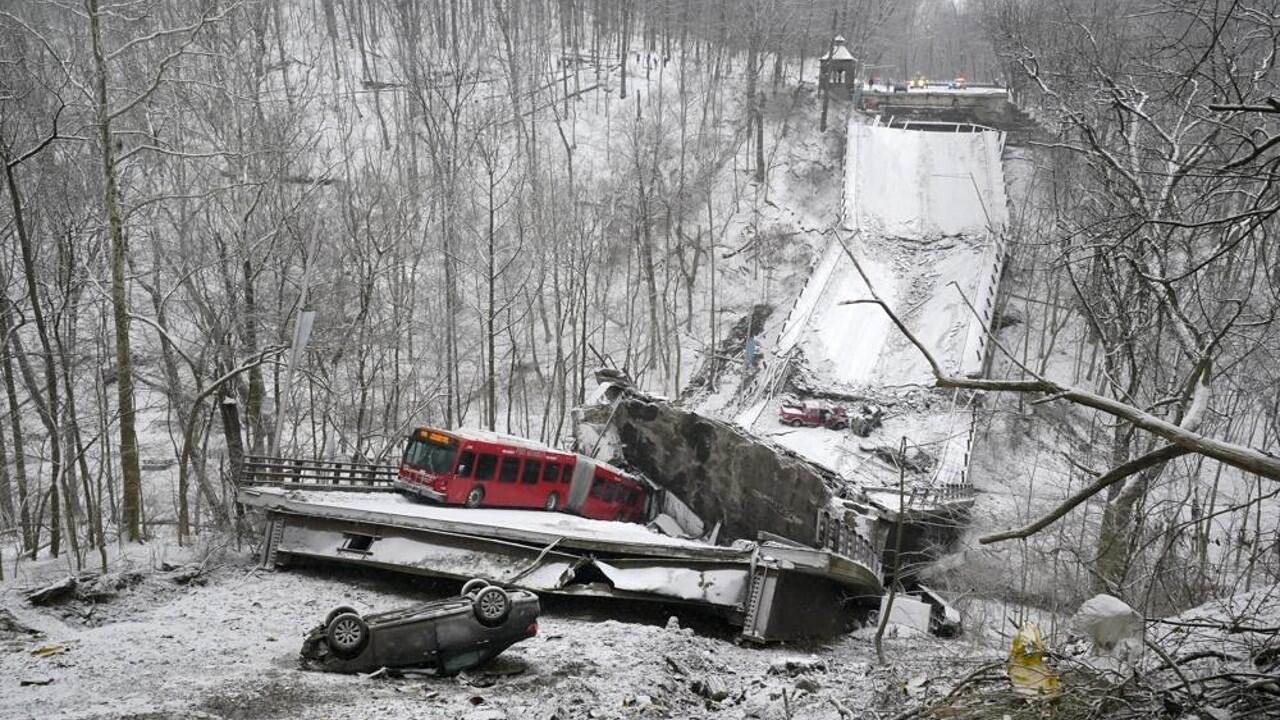 At least ten people were injured after a bridge collapsed in the city of Pittsburgh, Pennsylvania, eastern United States. The event occurred just hours before a visit by President Joe Biden to the city precisely to promote his infrastructure plans in the country.

In a dramatic example of the urgency behind President Joe Biden’s push to rebuild America’s infrastructure, a fateful collapse occurred on a Pittsburgh bridge just before his visit on January 28.

At least 10 people were injured, including minors, authorities said, using drones and other tools to make sure no one was trapped under the wreckage.

Immediately, the rescuers descended about 46 meters, while others formed a human chain to help rescue the occupants of a dangling bus.

Three of the injured were taken to hospitals and no one was seriously injured, said Sam Wasserman, a spokesman for Pittsburgh Mayor Ed Gainey.

The two-lane building collapsed hours before the president arrived in the city to promote the spending of the infrastructure law, for 1.2 billion dollars, which includes the maintenance of the affected bridge.

The lieutenant governor of Pennsylvania, John Fetterman described the event as “a horrible and surreal scene (…) I hope it is a wake-up call to the nation that we need to make these investments in infrastructure,” he stressed.

The collapse also caused a massive natural gas leak, forcing the temporary evacuation of several families from their homes until the situation was brought under control, Pittsburgh Fire Chief Darryl Jones told a news conference.

“It sounded like a snow plow,” said a witness who considered the fact that the collapse occurred on the same day as the president’s visit as “an amazing coincidence.”

Biden keeps his visit to Pittsburgh

After what happened and through a statement, the White House reported that the US president has not canceled his visit to Pittsburgh.

“Our team is in contact with state and local officials on the ground as they continue to gather information about the cause of the collapse … The president thanks the first responders who rushed to help drivers who were on the bridge at the time,” stated the communication from the Presidency.

The bridge was in the aftermath of an earthquake, with a large crack at the end where the bus was when it collapsed.

But according to the U.S. Department of Transportation’s National Bridge Inventory, an inspection in September 2019 revealed the city-owned bridge’s deck and structure were in poor condition.

Pennsylvania has a total of 3,198 bridges in condition classified as poor, according to the US Department of Transportation.

Joe Biden’s infrastructure plan was approved in November 2021, in what is seen as a rare bipartisan victory in a deeply divided Congress.

However, to achieve consensus between Democrats and Republicans, Biden had to sacrifice his initial bet on a project of 2.3 trillion. The change diminished a plan that promised to be profoundly transformational to invest in roads, bridges, water systems, broadband, ports, electric vehicles and the power grid across the nation. WhatsApp statuses: know how to view them anonymously