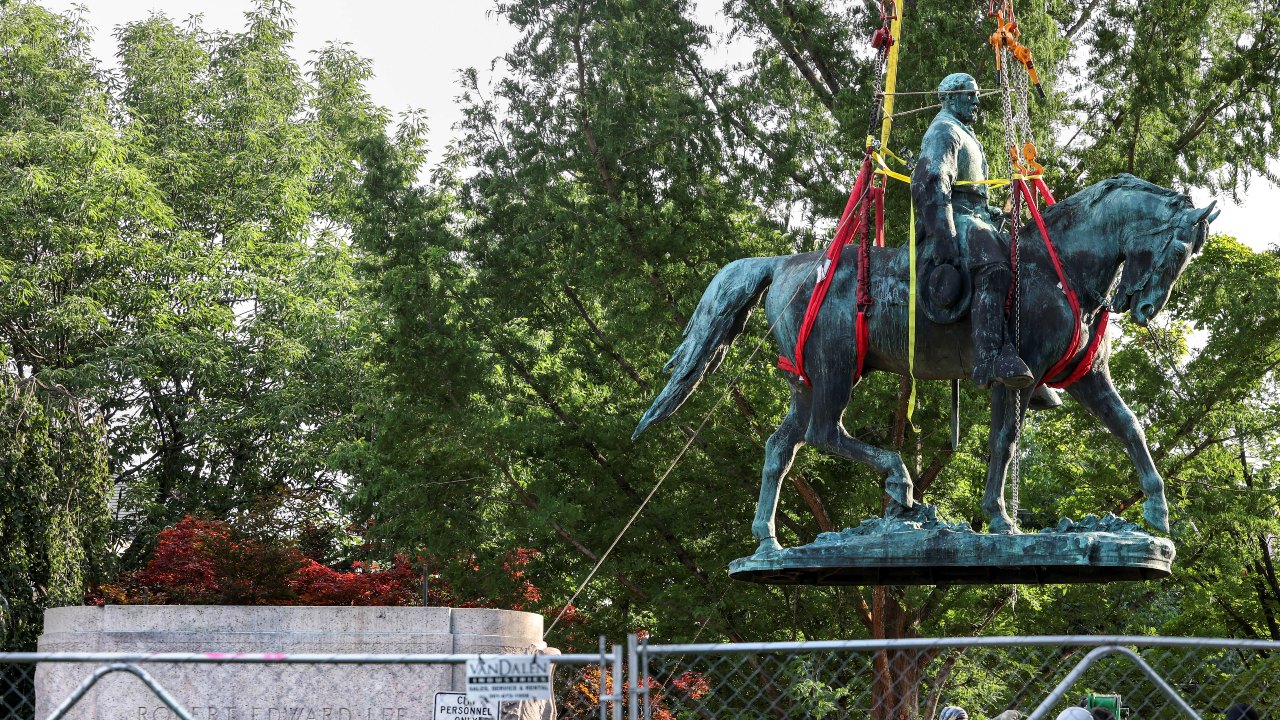 The statue of Robert E. Lee, the US Confederate General, will no longer be part of the public heritage of Charlottesville, Virginia. Neither will that of the also Confederate Thomas ‘Stonewall’ Jackson. Both were withdrawn this Saturday, after years of fighting and even with an episode in 2017, when a neo-Nazi fatally ran over a peaceful protester.

Trials, disputes, demonstrations and even the murder of a peaceful protester were the prelude, for years, until the removal of the statue of Confederate General Robert E. Lee became effective on the morning of this Saturday, July 10, in Charlottesville, in the state of Virginia, in the United States.

During the day the monument of another Confederate general, Thomas ‘Stonewall’ Jackson, was also removed in a commitment by the Charlottesville Mayor’s Office to leave behind the slavery and white supremacist past.

“Taking down this statue is a small step toward helping Charlottesville, Virginia, and the United States deal with the sin of being willing to destroy black citizens for financial gain,” said Nikuyah Walker, Mayor of Charlottesville. .

The Charlottesville community has historically been fighting for the removal of these statues, whose political significance offends the African-American community.

Kristin Szakos, a former Charlottesville councilor, present during the retreat, said that “the community has been trying to lower these statues for years.”

However, the spotlight was on Charlottesville in 2016, when an African-American high school student, Zyahna Bryant, started a petition to remove the Lee statue. This led to the unanimous decision of the City Council to carry out the withdrawal.

This decision drew a white supremacist rally in 2017, in a violent rally called “Unite the Right,” which ended in the death, run over by a neo-Nazi, of Heather Heyer, 32. At the time, former President Donald Trump called the clashes between these protesters and others who opposed this protest “blame on both sides.”

The removal could not be made until this Saturday due to changes in a state law that protected war monuments. Finally, in the month of April of this year, the highest Court of Virginia authorized the removal of the monuments.

From the local council the statues have been transported to a safe place until it is decided what will be done with them. The City Council has received ten requests to obtain the sculptures.

From the civil war to the ‘Black Lives Matters’ movement

This Saturday, during the removal, dozens of people approached the surroundings of the statues to witness the removal from the public sphere of characters related to white supremacism.

Only a small number of opponents were present, including a man who interrupted the mayor, but without major inconveniences, in a context of strong security deployment.

Confederate, colonial and slave statues have been a focus of protests in recent years, especially since 2020, after the emergence of the ‘Black Lives Matters’ movement.

The Confederate side lost the American Civil War, which lasted from 1861 to 1865. The Confederates were those states favorable to secession and slavery, which is why African Americans, who make up 13% of the population of the United States, consider a It offends that there are still those monuments in the country.