US sends team to Haiti to meet politicians vying for power 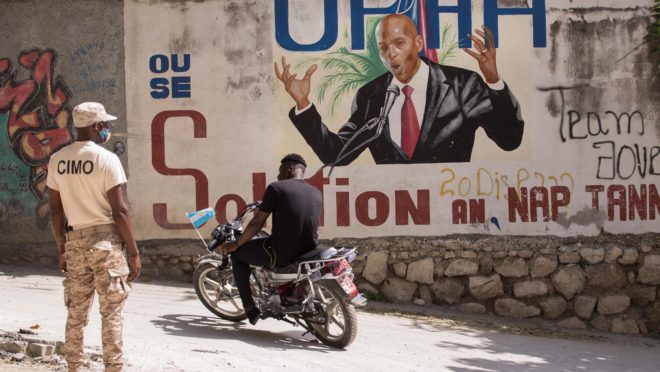 Today, a policeman guards the access to the home of assassinated president Jovenel Moise, in Port-au-Prince (Haiti).| Photo: Orlando Barría/Agência EFE/Gazeta do Povo

A US delegation will arrive this Sunday in Port-au-Prince to, according to local media, meet with the three politicians who are vying for power in Haiti after the assassination of President Jovenel Moise.

A diplomatic source confirmed to Efe the US delegation’s trip, but did not clarify whether a meeting is scheduled with the interim prime minister, Claude Joseph, or with the other two men who are fighting for power: senator Joseph Lambert and the prime minister. appointed minister, Ariel Henry.

According to local media, the delegation is expected to meet separately with Joseph, who has been in power since the assassination of Moise last Wednesday, and with the other two, who also say they are legitimately in charge of taking over the command of the country.

One is Senate Chief Joseph Lambert, who challenged Claude Joseph’s authority on Friday by being named interim president of Haiti by the eight serving senators in a Senate that has had no quorum since January 2020 due to the postponement of the 2019 elections. However, Lambert on Saturday announced the postponement of the inauguration ceremony that was scheduled to take place.

The government of Claude Joseph, which received public support from the UN and the US, did not react to Lambert’s appointment as interim president.

The third politician who claims to have the right to exercise power after Moise’s death is Ariel Henry, named prime minister by the then president on July 5, but who did not take office due to the assassination.

The US government also announced that it will send FBI and Department of Homeland Security investigative teams to Haiti to collaborate on the murder investigation.