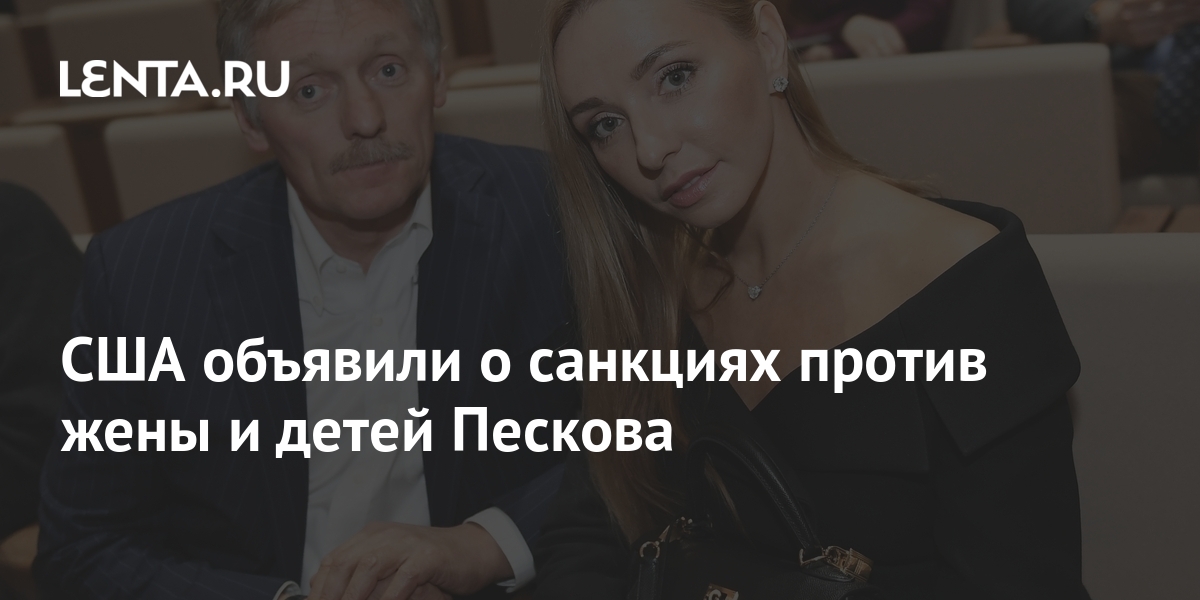 US State Department spokesman Ned Price announced sanctions against the wife and children of Russian presidential spokesman Dmitry Peskov. This is reported TASS.

We are also imposing sanctions on 12 State Duma deputies who led efforts to recognize the so-called Donetsk and Luhansk People’s Republics, as well as the wife and adult children of Dmitry Peskov

The wife of the press secretary, Olympic champion in figure skating Tatyana Navka commented on the US sanctions. “How can I feel about this? Life will show who influences what and how. Life goes on. It seems to me that the Lord God will judge everyone and put everything in its place, ”she said.

Sanctions against Volodin and Zyuganov

The US Treasury Department has included the leader of the Communist Party of the Russian Federation Gennady Zyuganov in a new list of anti-Russian sanctions.

Also on the updated list were the speaker of the State Duma Vyacheslav Volodin. In addition, sanctions are being imposed against ten Russian deputies who submitted a draft appeal of the chamber to Russian President Vladimir Putin on the need to recognize the independence of the Donetsk and Lugansk People’s Republics for consideration by the State Duma.

See also  The cereal harvest will fall 21% in Spain

New sanctions will prevent listed individuals from traveling to the UK, accessing assets held in the UK and doing business here

On March 10, it became known that Roman Abramovich and six other Russian businessmen were included in the UK sanctions list. In addition to the funds of the former owner of the Chelsea football club, the British authorities froze the assets of Igor Sechin, Oleg Deripaska, Alexei Miller, Nikolai Tokarev, Andrey Kostin and Dmitry Lebedev.

Abramovich and Deripaska are also banned from dealing with British individuals and legal entities and from entering the country. For these businessmen, the British authorities also imposed restrictions on the ownership, registration, movement and use of sea and air vehicles (yachts, private jets, etc.). The rest of the Russian businessmen from the sanctions list are banned from entering the UK.

EU countries have also imposed sanctions against 14 major Russian businessmen and their families. Entrepreneurs on the sanctions list are directly related to key sectors of the Russian economy.

According to Reuters, this includes the agricultural, pharmaceutical, metallurgy, telecommunications and digital industries. In addition, the association will apply restrictive measures to the banking sector of Belarus.

On February 26, the United States imposed sanctions against Russian President Vladimir Putin, Foreign Minister Sergei Lavrov, as well as a number of other members of the Russian Security Council, including Defense Minister Sergei Shoigu and Chief of the General Staff of the Russian Armed Forces Valery Gerasimov.

Today, the United States, in coordination with allies and partners, continued to provide a strong response to Russia’s unwarranted, unprovoked and pre-planned invasion of Ukraine and imposed sanctions against Russian President Vladimir Putin and Foreign Minister Sergei Lavrov, as well as other members of the Russian Security Council. in a public statement from the United States Department of the Treasury.

United States Department of the Treasury

New Zealand also announced sanctions against 100 Russians, including Putin, Lavrov and Russian Prime Minister Mikhail Mishustin. The Ministry of Foreign Affairs and Trade of the country explained that we are talking about a ban on entry into the country for persons associated with a special operation in Ukraine.

Canadian Prime Minister Justin Trudeau, in turn, said that the country is going to impose sanctions against Putin and Lavrov. According to him, these measures will be taken in connection with the start of a special operation in the Donbass.

Canada announces our third set of harsh coordinated sanctions. First, we will impose sanctions on President Putin and other architects of this barbaric war.

The head of European diplomacy Josep Borrell said that the EU has already reached the limit in financial sanctions against Russia.

With regard to financial sanctions, of course, you can always go further, but we have already reached the limits of what we can do. We did all we could

Borrell explained that we are talking about anti-Russian measures that led to the fall of the Russian currency by 40 percent. He also called painful the sanctions that relate to the ban on the export of high technologies in the industrial and other sectors of the economy.