US and NATO withdraw from Afghanistan’s main air base 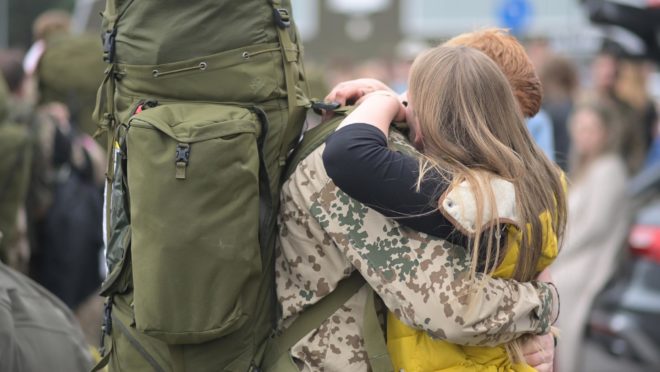 0
SHARES
0
VIEWS
Share on FacebookShare on Twitter
The last soldiers of the German mission in Afghanistan arrived at the air base in Lower Saxony after being evacuated from the field on June 30, 2021| Photo: CHRISTIAN DITTRICH/Agência EFE/Gazeta do Povo

US military forces and NATO allies (North Atlantic Treaty Organization) left Bagram air base on Friday, the coalition’s main operations center in Afghanistan since the beginning of the war 20 years ago , after the attacks of September 11, 2001.

The air base, built by the Soviet Union during the invasion of the 1980s, will now be controlled by the Afghan National Security and Defense Forces. About 600 US soldiers are expected to remain in the country, the Associated Press reported, to secure diplomats and protect Kabul’s international airport.

The departure of American and Allied troops from the air base, located about 70 kilometers north of Kabul, is part of a agreement signed with the Taliban on February 29, 2020, during Donald Trump’s presidency, in which the US pledged to withdraw all its military forces from Afghanistan by May. In return, the Taliban guaranteed that Afghan soil would not be used against the security of the United States and its allies and that it would begin negotiations with the government in Kabul.

When he took over the White House, Joe Biden extended the deadline for complete withdrawal by a few months, but kept his commitment, saying that by September 11, 2021, all US forces will have left Afghanistan. On Friday, Biden government spokeswoman Jen Psaki told reporters that the country plans to complete the withdrawal by the end of August, maintaining only a diplomatic presence in Afghanistan.

It must be remembered that NATO combat operations ended in 2014, which led the US to drastically reduce the number of soldiers in the country. Those who remained – about 8,500 – were focused on training and supporting Afghan security forces and conducting counterterrorism operations against al-Qaeda.

With this process of final withdrawal and no peace agreements, the US war in Afghanistan seems to be coming to an end, however much the White House has pledged to continue sending financial support to the local government ($3.3 billion for next year) and are still considering offering some form of air support to Afghan troops, should Kabul be at risk of being taken over by the Taliban.

Afghanistan, for its part, is still far from having days of peace.

On Friday, the Taliban celebrated that US troops were leaving Bagram air base and called the move “a good step” towards peace in Afghanistan. “We believe it is a good step for all Afghans and opens the way for us to establish and maintain peace. The departure of all foreign forces from the country is beneficial for both the United States and Afghans,” said the main spokesman for the Afghani Taliban, Zabihullah Mujahid.

However, there are serious concerns among Afghans over the terrorist group’s intention to end the 20-year war peacefully. The reduction in international troops on Afghan soil has been accompanied by an increase in Taliban offensives: since the withdrawal began, insurgents have captured nearly 80 of the 407 districts of government forces in the northern region and have recently conducted attacks near the capital, Kabul. There are also reports that Afghan security forces surrendered without a fight, leaving their transport vehicles and other American-supplied equipment to the insurgents. Some security analysts in the region estimate that the terrorist group controls 140 districts and has some level of influence over another 170.

The US commander in Afghanistan, Gen. Austin “Scott” Miller, told reporters this week he was deeply concerned that the country could enter a chaotic civil war. “The security situation is not good,” Miller said, according to the Washington Post, citing the increase in casualties among Afghan troops at a time when a process of dialogue between President Ashraf Ghani’s government and the Taliban should be taking place.

“It is possible to envision a path of civil war,” the general said, warning that if violence escalates, the country could “evolve” into a chaotic state, similar to what happened in the 1990s after the departure of Soviet forces.

Added to this is the prediction, made by the American intelligence community, that the Afghan government could fall within six months after the total withdrawal of international troops. Kabul even launched this week a “National Mobilization” to arm anti-Taliban militias, which, to international observers, is yet another sign of weakness and despair that could lead to a multifaceted civil war, as many of these militias are loyal to their local commanders and not the government.

But the Biden government will not back down. In a meeting with Ghani at the White House last week, the Democratic president said that the US will continue to support the country’s armed forces, but that Afghans would have to “decide their own future”.

Contrary to some predictions, the American president kept the commitment made by his predecessor. There is a huge popular call in the United States for troops stationed in Afghanistan to “return home” after 20 years of conflict that has killed 2,442 US soldiers, 3,800 hired by US private security companies and 1,144 soldiers from coalition countries. In addition to the loss of thousands of lives, the financial cost of war is estimated at $2.2 trillion, according to Brown University’s Costs of War project.

“The truth of the matter is as ugly as the war itself: Afghanistan was in a state of civil war before the US military entered the country and will be in a state of civil war long after the US military leaves.” wrote recently National Review columnist Daniel DePetris, member of the Defense Priorities organization and in favor of the withdrawal of American soldiers. “If 140,000 US and coalition soldiers have failed to resolve Afghanistan’s decades-long civil war, it is ridiculous to believe that the presence of 3,500 US troops will solve the problem.”

“The US decision to withdraw all military forces by the 20th anniversary of September 11 increases the likelihood that the four-decade civil war in Afghanistan will intensify, at least in the short term.” evaluates Richard Olson, an associate of the Center for Strategic and International Studies (CSIS) and who previously served as US ambassador to Pakistan during the Barack Obama administration.

He explains that the conflict in Afghanistan can be thought of as three interlocking and overlapping circles. “The innermost circle is the conflict between Afghans that has been going on since at least April 1979. The middle circle involves the regional states, many of which have intervened in Afghan affairs since 1979 (and even before). Finally, the outer ring. constitutes the involvement of international forces since October 2001”.

With the withdrawal of US and NATO troops completed in September, the outer circle dissolves. Intra-Afghan talks between the Taliban and the Ghani government are part of the inner circle, but they have not advanced, even after eight months of the beginning of the dialogue in Doha. The Taliban accuses Kabul of not being interested in the peace process; Kabul accuses the Taliban of not breaking ties with al-Qaeda and other terrorist groups.

One of the problems with the lack of progress in these negotiations is the dysfunctional government in Kabul. Ghani shares power with Abdullah Abdullah, his political rival, and disagreements between the two end up strengthening the Taliban. In an interview with CNN this week, Abdullah admitted that “unity among the political leaders” of Afghanistan is necessary if a peaceful solution is to be found and a government collapse averted.

All of this makes progress in intra-Afghan negotiations unlikely, at least in the short term, as the Taliban will likely test the government’s military strength after NATO leaves the country, intensifying the fighting. Olson also says that, in the regional context, it is necessary to establish a forum that brings together the main states with interests in Afghanistan so that a proposal can be found that is well received by all.

“The initial objective must be to cement the existing consensus that there should be no return from the Taliban emirate and to apply pressure on the Taliban to moderate its military offensive, accommodate its rivals and engage in serious substantive negotiations.”