US and allies increase pressure on China, which responds 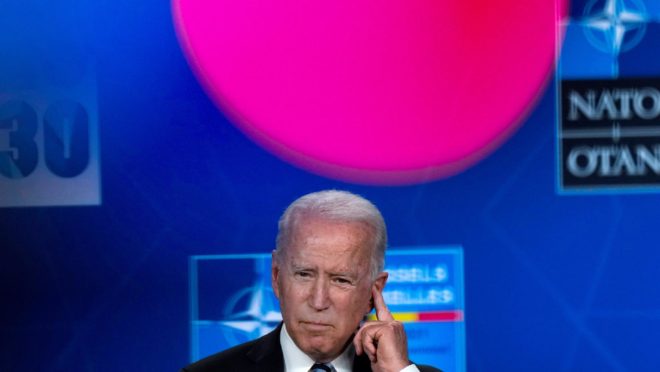 US government pressure on China was reinforced on Monday, when the 30 countries that make up NATO (North Atlantic Treaty Organization) declared the growth of Chinese military power a “challenge” to security western. In the statement, released after the group’s meeting in Brussels, the Atlantic alliance raised the bar on the risks posed by Beijing’s military ambitions.

China responded on Tuesday, calling for “rationality” from NATO and for the Western alliance to stop “exaggerating the Chinese threat theory.”

NATO, formed in the Cold War, continues to view what it describes as “Russia’s aggressive actions” as a threat to “Atlantic security.” The more aggressive tone about China, however, was the biggest news from the summit, the first with the presence of Joe Biden as US president. In it, the allies expressed concern about “growing influence” and Chinese military “investments”.

“China’s stated ambitions and assertive behavior present systemic challenges to the rules-based international order and areas relevant to the security of the Atlantic alliance,” the NATO countries said in a statement released after the meeting.

The member countries also highlighted the growth of China’s nuclear arsenal and the fact that Beijing treats its military modernization in an “opaque” way, in addition to mentioning the cooperation between Chinese and Russians. China’s military budget is the second largest in the world, second only to the American one, but it has been growing at a fast pace.

Before traveling to the UK and Belgium, where he has met in recent days with G7 and NATO leaders, Biden made it clear that he would seek support among old allies for the White House’s demands on Moscow and Beijing. The Democrat is keen to demonstrate that the group of rich countries is capable of offering economic, political and military responses to win what he classifies as a battle between democracy and authoritarianism.

On the margins of the meeting, Biden took the opportunity to thank the leaders of Estonia, Latvia and Lithuania for barring the Chinese Huawei’s entry into the 5G technology market, a crusade undertaken by Americans around the world under the argument of defending national security.

In a nod to diplomacy, however, NATO members said they intended to continue working with China and did not classify the country as a threat, a term used to deal with Russia.

Biden expressed appreciation for NATO and said the alliance is “unshakeable”. “It is a sacred commitment,” he said.

While Biden has tried to demonstrate unity, not everyone in NATO agrees with the pressure on China. Some countries, such as Hungary, have strong ties to Beijing and are looking to Chinese investment. Others, like Germany, are caught between the need to work with China to combat climate change and the duty to rein in its global ambitions. Others believe the excessive focus on China distracts from the alliance’s core mission against Russia.

China on Tuesday urged NATO to “stop exaggerating the Chinese threat theory” after the main Western military alliance accused Beijing of being a “systemic challenge” for the group with its “coercive policies”. According to Xi Jinping’s government, which has called for the European Union (EU) not to join the US strategy, the United States is “very sick” for trying to create a united anti-China front.

“We demand NATO rationality when evaluating China’s development and that they stop exaggerating the Chinese threat theory. They must not use our legitimate interests and rights as excuses to manipulate and create artificial confrontations,” said the Chinese diplomatic mission to the Union. European Union in a statement. “China does not pose a systemic challenge for anyone, but if someone wants to impose one on us, we will not remain indifferent.”

Unlike his predecessor, who was betting on a direct confrontation with Beijing, US President Joe Biden’s strategy is to bring together his European and Asian allies to try to prevent China from challenging American supremacy. NATO is a key element of Biden’s anti-Beijing strategy.

Monday’s summit communiqué mentions China ten times – at the last meeting, in 2019, the Asian power was mentioned only once.

On Monday, NATO Secretary General Jens Stoltenberg had said that all 30 member countries of the alliance recognize that Beijing “is increasing its military capabilities and continues its coercive behavior”, seeking to defuse accusations that Washington rules the agenda monocratically. China, he said, is “rapidly expanding its nuclear arsenal” and is “opaque” in its accountability for military modernization.

In its official note, the Chinese mission to the EU called the claims “slanderous” and claimed that NATO, with its “Cold War mentality, seeks to attack the peaceful development” of the country.

China’s defense policies, he said, “are legitimate and transparent,” noting that NATO’s arsenal is far superior to Beijing’s. “China’s nuclear weapons figures do not reach the magnitude available in NATO countries. Furthermore, China has always pledged not to fire them first under any circumstances,” the statement said. “If NATO is so committed to ‘peace, security and stability’, can it reach a consensus on this as China did?”

The attempt to form an allied offensive to contain Beijing was already in evidence this weekend, during the G7 meeting, when the group adopted its harshest rhetoric in front of Beijing since the Tiananmen Square Massacre in 1989. In a diplomatic victory for Biden, the US and its allies supported a new World Health Organization (WHO) investigation into the origins of the coronavirus.

“The US is sick and, in fact, very, very sick. The G7 had better take your pulse and prescribe some medication,” Chancellery spokesman Zhao Lijian said at his first briefing on Tuesday. press since the meeting of both groups that bring together the US and its allies.

Commenting on the G7 summit, Zhao said it “exposed the bad intentions of the US and some others to create confrontation, distance and expand differences and discord.” Seeking to minimize American influence, the spokesman said China and the European Union are “strategic partners, not systemic rivals”, accusing Washington of trying to create barriers between Brussels and Beijing. However, he also accused NATO of inflicting “war and chaos” on the world, referring to the 1999 bombing of the Chinese embassy in Belgrade, Serbia.

“It’s NATO’s blood debt to the Chinese people,” the spokesman said of the incident, for which Washington later apologized and said was a mistake caused by outdated maps.

Led by the US, NATO was created in April 1949, in the midst of the Cold War, with the specific objective of guaranteeing the collective security of the US and Western Europe against the bloc led by the former Soviet Union. With the end of the Cold War, NATO lost its initial purpose and began to focus on new security challenges, such as the fight against international terrorism – explained in the War in Afghanistan, with the 2001 invasion – the containment of Russia and, more recently, the rise of China as an economic and military power.