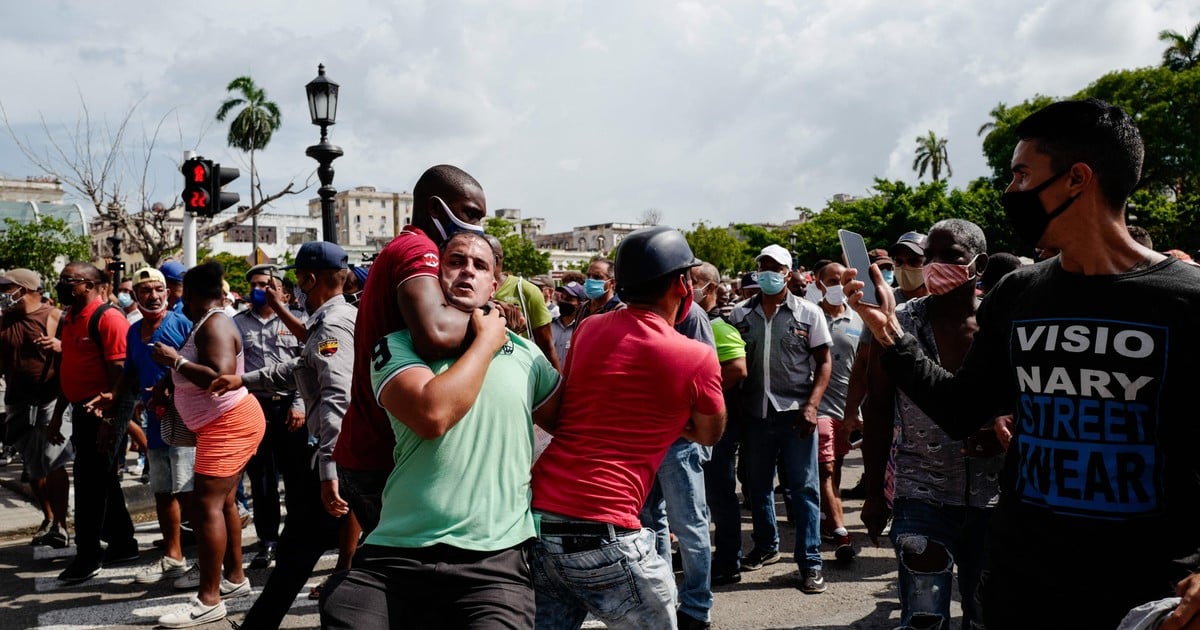 Through a statement, Uruguay joined in the repudiation of the violence exercised by the Cuban government of Miguel Díaz Canel against the protesters who took to the streets of Havana and other parts of the island to protest the shortage and high prices of food, amid the health crisis caused by the coronavirus.

“The Ministry of Foreign Affairs of Uruguay expresses its concern about the lack of guarantees for the exercise of the right of free expression and peaceful protest by Cuban citizens who demand the lack of medicines, food and basic freedoms, “the text states.

The document adds that the neighboring country “vows that the sister Republic of Cuba encourages channels of dialogue and full respect for human rights and fundamental freedoms is ensured, in accordance with international standards in this matter “.

Days ago, President Luis Lacalle Pou had pointed out that in Cuba there is “a dictatorship that does not respect human rights” and that “the Cuban people are showing courage worthy of praise.”

This Tuesday, the Cuban Foreign Minister Bruno Rodriguez Parrilla responded to the words of the Uruguayan president. “The statements denoting once again their ignorance of our reality are not surprising,” he launched on his Twitter account.

“The courage and freedom of the Cuban people have been demonstrated for six decades in the face of US aggressiveness, and in the face of provocation,” he added.

Statements about Cuba by President Lacalle Pou are not surprising, denoting once again his ignorance of our reality.

The courage and freedom of the Cuban people have been demonstrated for 6 decades in the face of the aggressiveness of the United States, and in the face of provocation.

Thus, Uruguay made its position clear as well as other Latin American and European countries, while Argentina has not yet taken a position.

“I don’t know the dimension of the problem, but maintaining blockades is the least humanitarian,” was Alberto Fernández’s response when asked in a radio interview about the situation on the island.

Meanwhile, Foreign Minister Felipe Solá said that the Argentine government is closely monitoring the situation in Cuba, where protests are taking place against the regime, which carried out a large military deployment to repress them.

“We don’t have a position taken yet. Our position is to know the facts closely and, secondly, to look at the issue of human rights for which we do not have a different rod depending on our sympathy with one country or another, “he said in dialogue with C5N.

Solá’s prudence about the events on the island comes after the controversy over Argentina’s abstention in a vote in the OAS of a resolution that condemned the arrest of Nicaraguan political prisoners by the government of Daniel Ortega.

In contrast, the Uruguayan Chamber of Deputies approved last Tuesday a resolution condemning the repression by the Ortega regime against the population and reaffirming “its conviction and support for the right to demonstrate legitimately.”

In the draft resolution, the Uruguayan deputies showed their rejection of political persecution and condemned all “forms of repression and abuse of repressive force.”

Chaos in the streets

An unprecedented series of demonstrations with shouts of “freedom!” and “down with the dictatorship!” They erupted in Cuba on Sunday, when the country is going through its worst economic crisis in 30 years.

In the capital, protesters protesting shortages and high food prices were intercepted by security forces and brigades of government supporters, leading to violent clashes and arrests in front of the Capitol.

The clashes between the protesters and the pro-government took place in the central Parque de la Fraternidad, in front of the Capitol, where more than a thousand people gathered with a strong presence of the military and police forces, who carried out several arrests.

These are the largest protests in decades against the Cuban government. It is the first time that a large group of Cubans have taken to the streets of Havana to demonstrate against the Government since the famous “Maleconazo” of 1994, in the midst of the crisis of the “special period.”