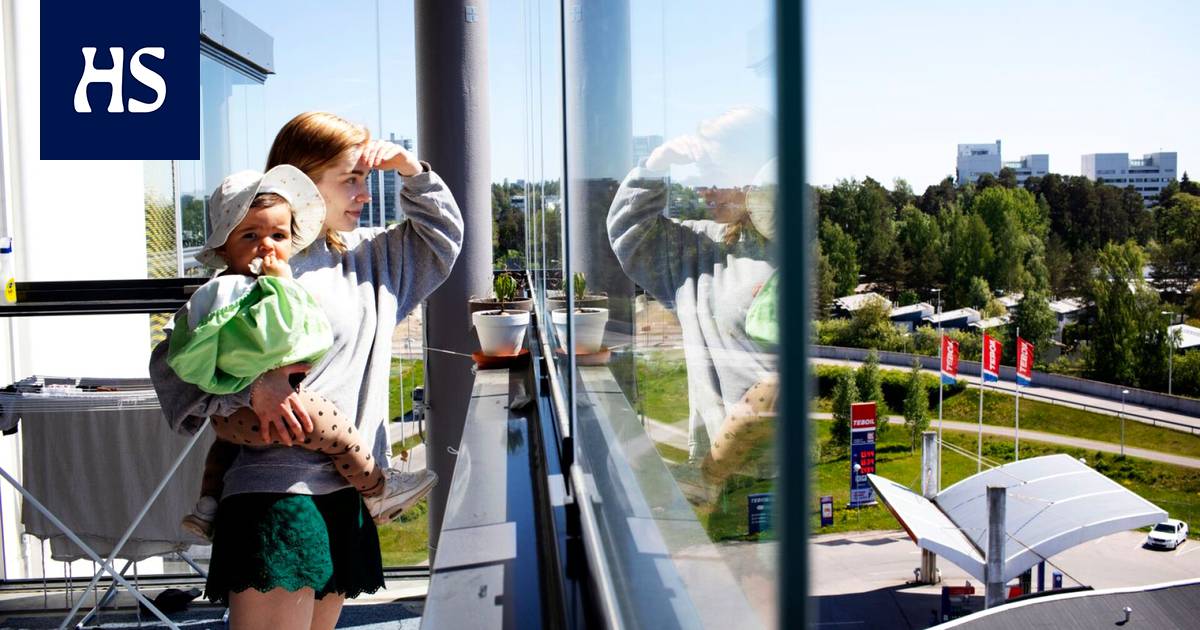 Car pool and trucks roar on Länsiväylä in Kivenlahti, Espoo, towards Kirkkonummi. When the highway starts and the speed of the hundred is allowed, everyone weighs the gas.

When residents head to their homes via Old Jorvaksentie, they have to walk next to the Teboil gas station.

“It’s not very idyllic when there are trucks standing in the yard ruining the landscape. I tried to find out if the gas station left sometimes, but I couldn’t find the information, ”he says Iina Falck.

He moved from the center of Helsinki with his family to a rental apartment last December.

“Fortunately, the windows of our apartment face the sea.”

Marinkallio will be completed with three more apartment buildings. It is one of the approximately 60 residential areas that have emerged in recent years here and there along the metropolitan area.

The phenomenon has been caused by the land use, housing and transport agreement (mal) agreed between Helsinki, Espoo and Vantaa and the state from 2016 to 2019.

New areas have been built in the Helsinki metropolitan area with great efficiency, as the goal has been to increase annual housing production to almost 16,000.

Massive apartment buildings have been accommodated on plots attached to passageways and on the edges of railway construction sites. They have risen especially on the outskirts of the suburbs, outside the urban structure.

Power construction has produced an uncomfortable city, say a professor at Aalto University Anssi Joutsiniemi and Professor of Urban Geography at the University of Helsinki Mari Vaattovaara.

They have studied mal contracts and land use in urban development. Recently released their as well Jenni Airaksinen and Markku Wilenius a work written by City in politics – Society, man and a wonderful city.

Professor Emeritus Matti Rautiola while concerned about the future of new residential areas.

Rautiola has worked as the General Counsel of the Building Information Foundation and is currently a member of the Board of the Housing Finance and Development Center (Ara).

HS called for this case, researchers on a tour of new residential areas. They criticize Espoo above all, but it also applies in part to Vantaa and Helsinki. HS asked the researchers to show what they were talking about.

Near the Niittykumpu metro station in Espoo, the new apartment buildings are almost closed on the main road to Haukilahti. High fences line the long and narrow courtyards between the buildings.

According to Matti Rautiola, the Mal agreement is a good tool for zoning new homes. But is it too connected to the construction of rail, he asks. If residential areas are designed to feed customers into the transportation system, is man in all this a subject or an object?

Housing planning based on public transport is justified, for example, by guiding people to more environmentally friendly modes of transport than private cars. However, does compaction lead to discomfort at the same time?

Three-band A row of thick-framed, tall apartment buildings is forming along the sea breezes, a former concentration of car shops. Behind them is the Tontunmäki detached house area.

Along Ylismäentie in Olari, a lonely, large and wall-like apartment building stands out from the landscape near the intersection of major waterways.

“When you compare individual, massive apartment buildings with old residential buildings in the vicinity, the building efficiency is one and a half times, often even twice as much,” Joutsiniemi estimates.

“I guess Espoo’s goal has not only been how much floor space can be squeezed into the town plan,” Rautiola reminds.

There are no services at street level, Rautiola points out, although this should be the case in a nice city.

The eastern corner of Vermonniity, on the other hand, is bordered by a row of sturdy parking garages, although the Raide-Joker route and stop under construction are very close. One of the basic principles of the Mal Treaty is that the new areas are based on public transport and the possibility of walking and cycling.

“Then why is so much parking space being done?” Joutsiniemi asks.

Vantaa On the Tikkurila side, researchers believe that the goal of the agreement has been successful.

According to the professors, the “capital” of Vantaa has been compacted and supplemented with new buildings in a moderate and successful manner. There are buildings from different eras in the blocks, as cities should be.

Minna Dahlberg (left) had come to her friend Marita Hakala for coffee at Tikkurila’s Peltolantie. Hakala praises his home corners for being calm. The house was completed last September. Picture: Heidi Piiroinen / HS

On the strip between the Lahti motorway, Ring Road III and the old Lahdentie, on the other hand, a separate pair of three-block apartment buildings has been created in the middle of nowhere. There is a depot on the other side of the road, and the center of Hakunila is a couple of kilometers away.

The thick-framed buildings are colorful, as the names of the housing companies might say: Vantaa Strawberry, Vantaa Raspberry and Vantaa Cranberry. It is striking that the balconies are missing.

The greater part, 81 per cent of mal housing projects, according to data collected by researchers, have been implemented as apartment buildings.

Mari Vaattovaara wonders where the Quality Factors of both apartments and residential areas are, such as the pleasant surroundings. Where are townhouses or low-rise buildings where people have different options, such as dense communities of detached houses?

Answers must be sought at the slow pace of construction in the mid-2010s. The metropolitan area was plagued by a severe housing shortage. Still, only a total of 8,000 apartments were completed in Helsinki, Espoo and Vantaa in 2014.

The aim was to get a lot of new homes close to public transport routes and to place the buildings overlapping and interleaving with the existing urban structure. In this way, the decentralization of the community structure could be stopped.

Professor Anssi Joutsiniemi from Aalto University and Professor Emeritus Matti Rautiola were photographed in Herttoniemi, next to the apartment buildings built next to the Herts shopping center. The new tower blocks look more like hotels than residential buildings, they say. Picture: Heidi Piiroinen / HS

State for the first time, the mal contract undertook to finance the construction costs of the Raide-Joker with EUR 84 million and the extension of the western metro with EUR 240 million. Ara’s obligation was to finance and guarantee loans for rental and right-of-occupancy houses.

In return, the cities promised to plan housing plots in a way that would allow construction companies to start both owner-occupied housing projects and rental housing projects commissioned by developers. The housing boom started.

New housing began to rise in Helsinki, Espoo and Vantaa at a record pace. In all, almost 16,000 of them were completed in the metropolitan area in 2019, and the pace seems to be still strong.

Just this is a problem for researchers. The Mal contract has produced construction projects that have resulted in a very large number of small homes being completed. The average size of apartments has collapsed, especially in Espoo and Vantaa, but also in Helsinki.

In Helsinki, shrinkage was smaller, from just under 70 square meters to 57.4. The development was curbed by a regulation issued by the city in 2014 that in an apartment building, 40–50 per cent of the apartments must be implemented as two-bedroom family apartments.

“The end result has not been under anyone’s control. After Espoo and Vantaa have drawn up town plans for apartment buildings, no party has monitored what kind of apartments have been built in the sites, ”Joutsiniemi claims.

Researchers are considering whether the guidance could lead to slightly larger homes – that is, cities to follow the implementation plans drawn up by construction companies.

What will happen in 50 years, Rautiola asks. Who lives in the small dwellings: singles and low-income people, Finns or mainly immigrants, who are estimated to need a quarter of a million from abroad to enter the labor market?

“Perhaps we have built a social problem?”

By this, Rautiola refers to concerns about the segregation of residential areas.

Indeed, researchers now have one question for policymakers: would it be time to do some kind of mid-term review of what kind of city mal contracts create?