United States: What will Joe Biden’s first 100 days in the White House look like? 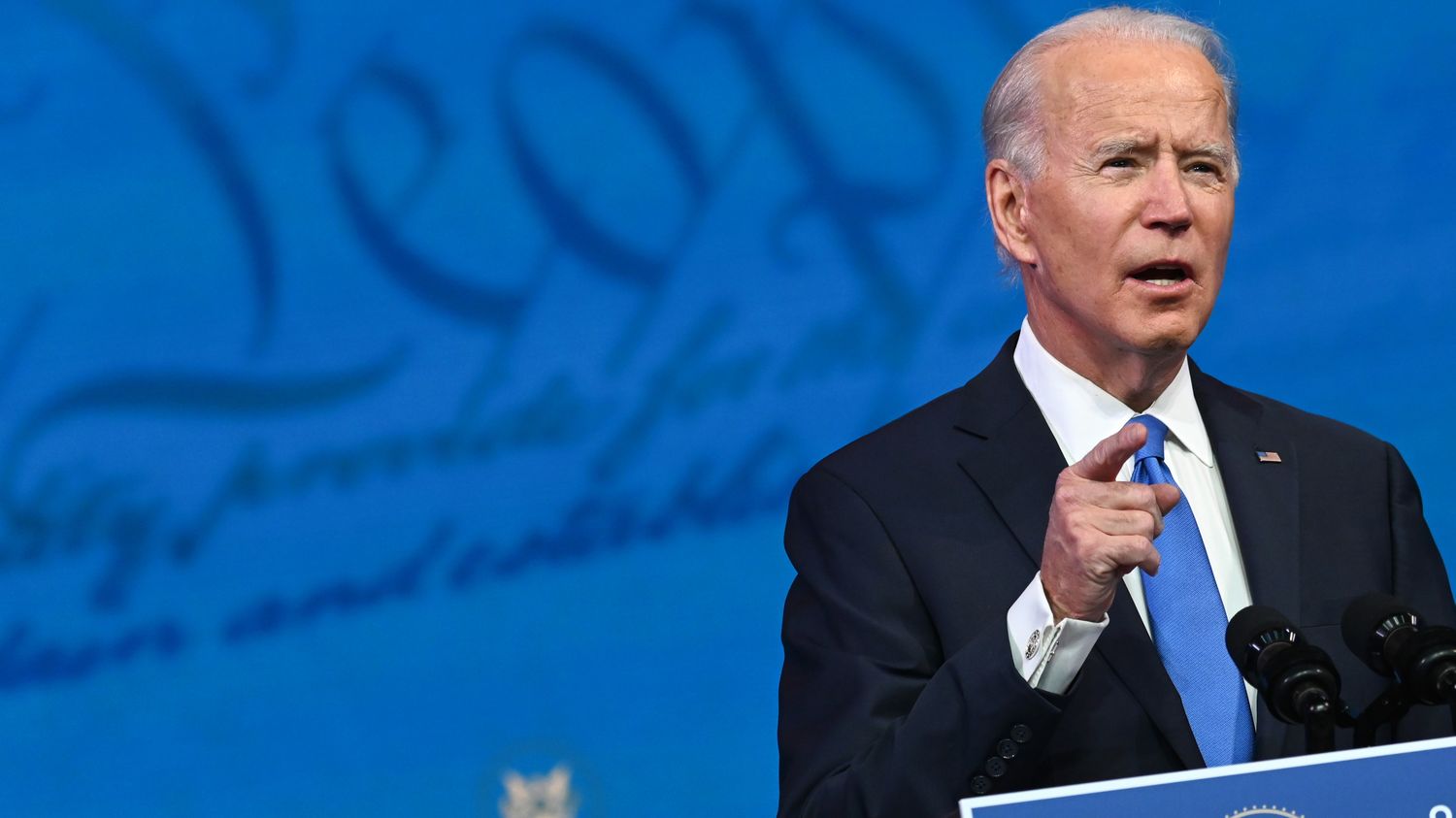 Make Donald Trump forget. In short, this is Joe Biden’s White House program. The Democrat intends to take action on Wednesday, January 20, the date of his inauguration, by signing a dozen decrees. Response to the Covid-19 epidemic, economic recovery, fight against the climate crisis or racial injustices … Franceinfo details the ambitions of the 46th President of the United States for his first months in office.

He kept hammering it: Joe Biden’s priority is to stem the progression of Covid-19 in the United States. The country has crossed the threshold of 400,000 deaths linked to the disease and now has more than 24 million confirmed cases of coronavirus, according to Johns Hopkins University figures*. “We are not going to get rid of the Covid-19 during my first hundred days [de mandat], recognised* the Democrat at a press conference in Delaware on Jan. 14. But I am convinced that in a hundred days we can stop the progression of the disease. “

For this, Joe Biden unveiled an ambitious battle plan. From his first day at the White House, he will make it compulsory to wear a mask when traveling between states, mainly on planes, as well as in places under federal authority, even if most of the buildings are under the jurisdiction of the governor of the state or municipalities. Joe Biden also called on Americans to wear a mask for 100 days from his inauguration and he is talking with local authorities to encourage them to put in place similar measures at the level “cities and states”, note Vox*. Joe Biden has also indicated that he wants to allocate additional federal funds for the purchase of protective equipment and tests for the coronavirus.

The nThe new American president also wants to perform 100 million injections of the vaccine against Covid-19 in one hundred days. According to CNN*, 12 million Americans had already received a first dose, Friday January 15. “Our plan is as simple as it is daring: to vaccinate more people for free; create more places where they can get vaccinated; mobilize more caregivers to do the injections; increase orders and distribute them as soon as possible”, he listed during his press conference in his stronghold of Wilmington last Thursday.

This would include the establishment of thousands of federal vaccination centers, financial assistance to states or the immediate distribution of vaccine reserves of the federal state, says CNN. The Trump administration had in fact decided, as a first step, to store 50% of the vials to avoid any shortage for booster injections. Another objective of these first hundred days: to reopen “the majority of schools”, raise the Washington post*. Joe Biden intends to increase the screening efforts for Covid-19 and above all to ask Congress to finance the purchase of protective equipment for students and teachers.

He also promised that the United States would return to the World Health Organization (WHO) from his first day in office. Donald Trump had slammed the door of the institution in July 2020, in the midst of a pandemic (but the withdrawal of the United States was not to be acted until July 2021, after one year of notice, in accordance with American law).

Joe Biden’s response to the Covid-19 epidemic also includes an economic component. The health crisis has plunged eight million inhabitants in poverty in six months, according to a study relayed by the channel CBS*. And the country has 10.7 million people Unemployed*, according to figures for the month of December. To get the economy back on track, Joe Biden presented a colossal stimulus plan 1.9 trillion dollars (1.567 billion euros), supposed to get the United States out of its worst crisis since the 1930s.

Among the flagship measures, a check of up to 1,400 dollars (1,154 euros) paid to each American, according to his income. The Democrat also wants to grant an extension of $ 400 per week to beneficiaries of unemployment insurance, until September, details CNN*. It also plans to extend the moratorium on rental evictions and foreclosures and release $ 350 million to allow local and national authorities to maintain the employment of educators, police, firefighters and public health workers. Last objective, which was one of his campaign promises: to increase the minimum hourly wage to $ 15, more than double the rate currently in force ($ 7.25).

This contingency plan, however, must be approved by Congress, where Democrats will have only a narrow majority in the Senate. A challenge that Joe Biden does not intend to back down. “During this pandemic, we cannot let people go hungry. We cannot let people be kicked out. We cannot let nurses, educators and others lose their jobs when we need them so badly. them, hammered the 46th president Thursday in Wilmington. We must act now and decisively. “

In 2016, Donald Trump campaigned hard against immigration. Four years later, his successor plans to unravel most of the measures taken by the Republican during his mandate. From Wednesday, Joe Biden intends to sign a lifting decree prohibition of entry into the territory of nationals of several countries, mainly with a Muslim majority.

His administration will also propose a law that would allow the regularization of 11 million undocumented migrants, reports the Los Angeles Times*. Immigrants could thus obtain permanent residence after five years in the United States, then citizenship three years later. Obtaining US citizenship would be made easier for essential workers and “Dreamers”, who arrived illegally in the country when they were children. Donald Trump tried in 2017 to abolish the DACA program, which notably protects these young people from deportation, but his decision was finally overturned by the Supreme Court in 2020.

Joe Biden also plans to stop the construction of the wall on the border with Mexico, reunite families separated by deportations ordered under the Trump administration and set the limit for asylum applications at 125,000 per year, against 15,000 currently, details Reuters* and Vox*. Symbol of this drastic change of course on immigration: the Democrat has appointed as Secretary of Homeland Security Alejandro Mayorkas, who immigrated as a child to the United States. The minister, responsible for managing the country’s migration policy, will become the first Hispanic to hold this post.

In addition to the measures announced on immigration, Joe Biden intends to tackle racial injustices by notably creating a national commission to supervise the police, as he had announced in June*. The United States was shaken in 2020 by a large protest movement against racist police violence, Black Lives Matter, after the deaths of several African Americans like George Floyd and Breonna Taylor. The measure announced by Joe Biden is part of a larger law enforcement reform plan, which provides $ 300 million to develop local police.

Commit to the environment

Another area in which Joe Biden intends to make a clean sweep of Donald Trump’s action: the environment. From January 20, the Democrat will sign a decree for the United States to reinstate the Paris Agreement on the climate. He has also already promised to overturn a number of decrees of his predecessor, which have undermined the fight against the climate crisis. And he pledged to organize a climate summit*, bringing together “leaders of major economies” of the planet, during his first 100 days in office. It remains to be seen under what conditions the event could take place, given the health context.

During these first three months, the Biden administration will also start working on its ambitious plan to invest in the green economy, according to national public radio. NPR*. The Democrat has pledged to allocate $ 2 trillion throughout his tenure to develop renewable energy, finance the construction of energy-efficient buildings, achieve carbon neutrality by 2050 or even support the communities most affected by the climate crisis. This investment plan must, however, be validated by Congress.

Be an ally of the LGBT + community

Joe Biden has been committed to the LGBT + cause for several years now. In 2015 he had declared his support for marriage for all even before Barack Obama did. Now he intends to pass the Equality Act in Congress during his first three months in the White House. The law prohibits discrimination on the basis of sexual orientation or gender, especially in housing and education, says the magazine USA Today*. “This is essential to ensure that no future president can again reverse the civil rights and protections of LGBT + people”, estimated in October the Democrat, the first American president to appoint as minister an openly gay man.

Joe Biden also wishes to return to the policy limiting the rights of transgender people, put in place by Donald Trump. Starting by authorizing them again to serve in the army, “his first day” mandate, underlines the Washington post*. He also pledged to fight violence against transgender people, especially women of color, and to reinstate federal guidelines guaranteeing their protection in schools.

* These links refer to pages in English.

Salibandy | Too long a racket ruined Rasmus Kainulainen’s match in the F-league: “He has not scored any goals since”