United States: what does the triumph of the Democrats in the Senate imply? 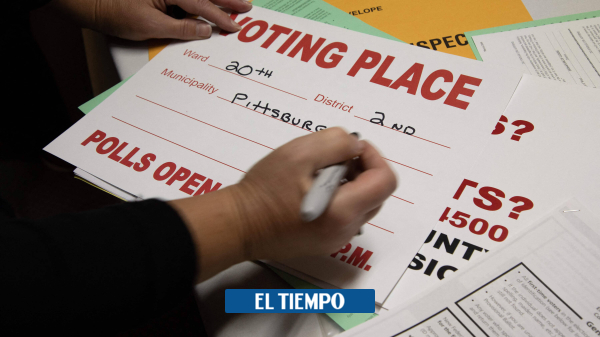 The bad electoral day that the Republicans experienced last Tuesday was partially confirmed during this weekend, when Democrats secured control of the Senate with two wins in Arizona and Nevada which already guarantees them a majority in the Upper House for the next two years.

(Also: United States: the winners and losers of the legislative elections)

In Arizona, Senator Mark Kelly defeated Blake Masters by more than 100,000 votes (90 percent counted), while in Nevada the AP agency and other media sang the race in favor of Senator Catherine Cortez-Masto by just over 6,000 votes, beating Trump candidate Alan Laxalt.

Although neither of them had conceded defeat, and the victory of the Democrats has yet to be certified by the state authorities, the current advantages and the votes still to be counted did not leave room for a possible alteration of the results.

With these two triumphs, the Democrats would obtain 50 seats (among 100), which gives them the majority, because in the event of a tie, the decisive vote is cast by the vice president of the country. In this case, Kamala Harris.

The number could even increase to 51 (vs. 49 Republicans) on December 6, when a special election is held in Georgia to define the winner in this state. Although Democrat Raphael Warnock prevailed, he did not obtain the 50 percent of the votes that this state requires to win in the first round.

(You can read: Elections in the United States: the 5 lessons left by the results)

In the case of the House of Representatives, the race was still in limbo, although with a slight advantage for the Republicans.

At the moment, the elephant party had secured 211 seats, compared to 204 for the Democrats, with 20 races still pending for a winner. At least 218 are required to reach majority. In 9 of them the Republicans were ahead in the partial counts, which would give them, if confirmed, 220 seats.

But in several cases the advantage was less than 1 percent and there were still many votes to count.

Although most experts continued to give them as favorites to regain control of this organ, the chances of another Democratic surprise were not out of the question.

(Also: Biden says he is ‘prepared’ to work with Republican opposition)

But the uncertainty could last for several more days, even weeks, given that most of the votes still to be counted are from states that allow voting by mail until Election Day itself. In the case of California, for example, the votes are valid as long as they arrive this Tuesday, November 14.

Even if they win, the results leave much to be desired, since the Republicans expected at least 30 seats or more and are on the verge of a precarious majority with only a few votes difference.

That complicates the governability of this party in the Lower Housesince they would have to have almost 100 percent support among their members to approve any initiative.

(We recommend: US Elections: the new faces that refresh the diversity in politics)

in governorates, the results also favored Democrats, who regained control in two states and were close behind in a third in Arizona.

As a whole, the outcome of these mid-term elections caused a kind of crisis within the Republican party, as they arrived at the meeting with excellent conditions to sweep and ended up, for now, on the defensive.

(Read more: US elections: why the delay in knowing the final results?)

Several legislators in both houses, in fact, have asked to postpone the internal votes to define the presidencies of the Senate and the House of Representatives.

According to Senator Marco Rubio, before putting the stamp on the current leaders (Mitch McConnell in the Senate and Kevin McCarthy in the House), one must first find out “what the hell happened.”

Both internally and externally, Most of the criticism points to former President Donald Trump and his excessive influence within the party..

(You can read: Maura Healey will be the first openly lesbian governor of the US.)

Especially since Trump almost handpicked a good number of the candidates who ended up losing in battleground states where Republicans seemed competitive.

“We had a historic opportunity, and Trump, by choosing ineligible candidates, destroyed it. It’s cost us three elections already and it’s time to stop this nonsense,” says Scott Reed, a strategist associated with the Republicans.

In Reed’s opinion, TTrump also ended up encouraging the Democratic and independent vote by suggesting that a “red tide” in these elections was the prelude to his candidacy for 2024.

(Also: Donald Trump: the keys to his summons to testify for storming the Capitol)

So too does former New Jersey governor and potential Trump rival in the party’s primary, Chris Christie. “When Trump appeared on the radar he told us that with him we would get tired of winning. But since then we have lost everything, in 2018, 2020 and now in 2022. I am tired, but of losing because of him, “said Christie.

Some of his main advisers, including James Miller, asked him to temporarily postpone the announcement of his candidacy, which was scheduled for this Tuesday.

“I am going to make a big announcement on Tuesday, November 15 at Mar-a-Lago”his residence in Florida, announced the millionaire on the eve of these legislative elections.

But everything indicates that the former president will ignore it and will launch this week. For Trump, if some Republicans failed, it was because they did not fully play for Trumpism.

NFL: In doubt Mexico as the venue? Germany would have more games due to the uncertainty of the remodeling of the Azteca Stadium