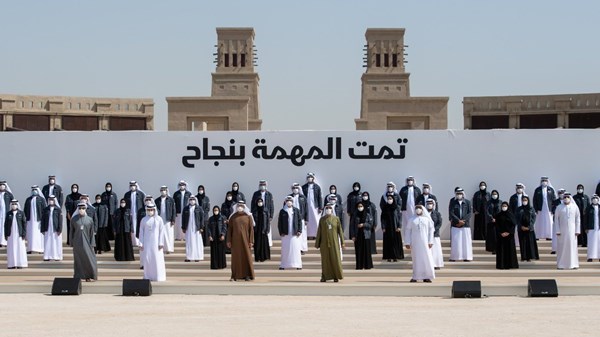 Dubai (Al-Ittihad) – The work of the “Fifty-One Retreat” was launched this morning, headed by His Highness Sheikh Mohammed bin Rashid Al Maktoum, Vice President and Prime Minister and Ruler of Dubai, and His Highness Sheikh Mohammed bin Zayed Al Nahyan, Crown Prince of Abu Dhabi and Deputy Commander The Supreme Council of the Armed Forces, with the participation of the UAE government ministers and officials of the federal and local government agencies in the country, as the ministerial retreat sessions aim to develop an integrated strategy for the next fifty years, and to formulate developmental axes for the various development sectors, in order to establish the UAE’s leading position in the region, enhance its competitiveness and establish a new phase By preparing for the future with a clear vision and work programs capable of achieving the aspirations and aspirations of the people of the Emirates and their wise leadership.
The agenda of the ministerial retreat was opened by a session of His Excellency Mohammed bin Abdullah Al Gergawi, Minister of Cabinet Affairs, in the presence of His Excellency the ministers and heads and secretaries of the local executive councils, which came to discuss the future directions of the UAE government during the next phase and to formulate an integrated set of axes and frameworks that form an extension of the state’s national agenda.
Al-Gergawi stressed that the next stage requires the development of an integrated system of work between the governmental, semi-governmental and private sectors, in order to ensure concerted and complementary efforts to draw the strategic direction and the basic features of the next 50-year march, by formulating innovative axes and perceptions that enrich the development paths in the country and ensure the process of renaissance and development in the UAE continues to distinguish it. .
His Excellency the Minister of Cabinet Affairs indicated that new governance will be worked on to manage the work of the federal government and ministries, based on dynamic and rapid national priorities, adding that the main objective of the new strategic directions is to formulate an advanced work plan that strengthens the position of the UAE.

The “fifty retreat” comes within the efforts of the UAE government and its preparations to formulate strategic frameworks and axes of work in the government and private sectors for the next fifty years, in order to enhance the country’s readiness to be among the best and most distinguished in the world, and in a way that establishes its position and regional position as a preferred destination for living, work and investment.
The holding of the ministerial retreat coincides with the golden jubilee of the UAE, which is the starting point for a new phase in its continuous development path at an accelerated pace, during which the government of the UAE, through its various leadership, administrative and executive structures, seeks to formulate an advanced strategic vision based on innovative and unique ideas that push the state’s development path. To broad horizons and supports its efforts to achieve more achievements and successes that meet the aspirations of the people of the Emirates.

Andalusia rebels against the cut in European funds of the CAP