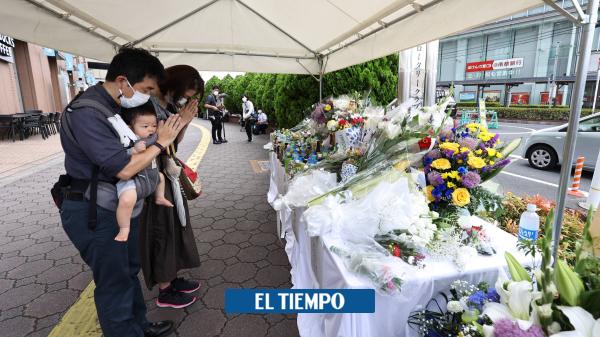 Japan keeps crying death of former Prime Minister Shinzo Abe, assassinated the day before during a rallywhere the police admitted “undeniable” security flaws.
The assassination of Japan’s best-known politician shocked the country and reverberated around the world, given the country’s low crime levels and strict gun laws.

(The photo of Shinzo Abe’s alleged killer before shooting)

The man accused of shooting Abe, Tetsuya Yamagami, was arrested at the scene, and according to the police, he confessed to the crime and explained that he committed it thinking that Abe was linked to an unidentified group. Various media speak of a religious group.

The police are investigating the background of this unemployed 41-year-old man, including reports that he was a member of the Maritime Self-Defense Force, the Japanese navy, and indicated that he would have used an “apparently” homemade weapon.
Abe’s nationalist views when he was prime minister created division in the country, especially his desire to amend Japan’s pacifist constitution to recognize the country’s armed forces.

Others praised him for his economic strategy and his efforts to put Japan on the world stage.

At the time of the attack, Abe delivered a campaign speech – ahead of this Sunday’s election for the Upper House of Parliament– in which he precisely promoted increasing military spending and allowing the country to have a permanent army. Then, he was hit by two bullets in the neck. Abe was pronounced dead hours after the attack.

The politician did not have the security perimeter that usually protects leaders in other countries because in Japan that deployment, at least until now, was thought unnecessary, since it is one of the ten countries in the world with the fewest weapons in the hands of civilians: a gun for every 330 inhabitants.

Since 2017, Japan has recorded 14 firearm-related deaths, in a country of 125 million people.

See also  Alleged cop killer was not allowed to own weapons

In fact, the most recent gunshot murder of a Japanese politician occurred in 2007, when Iccho Ito, the mayor of Nagasaki, a city victim of the atomic bomb at the end of World War II, was attacked by members of the yakuza.

The assassination not only disrupted the campaign for today’s parliamentary elections, which are expected to be held under tight security and even the media will not release the names of the candidates Abe was campaigning for when he was assassinated, but that can shake Japan in the coming years, since the effects that this assassination will have are yet to be seen.

Meanwhile, the body of Shinzo Abe, the longest serving prime minister in office, arrived yesterday afternoon at his home in Tokyo. Japanese media reported that the wake would take place on Monday and a private funeral on Tuesday with only those closest to Abe.