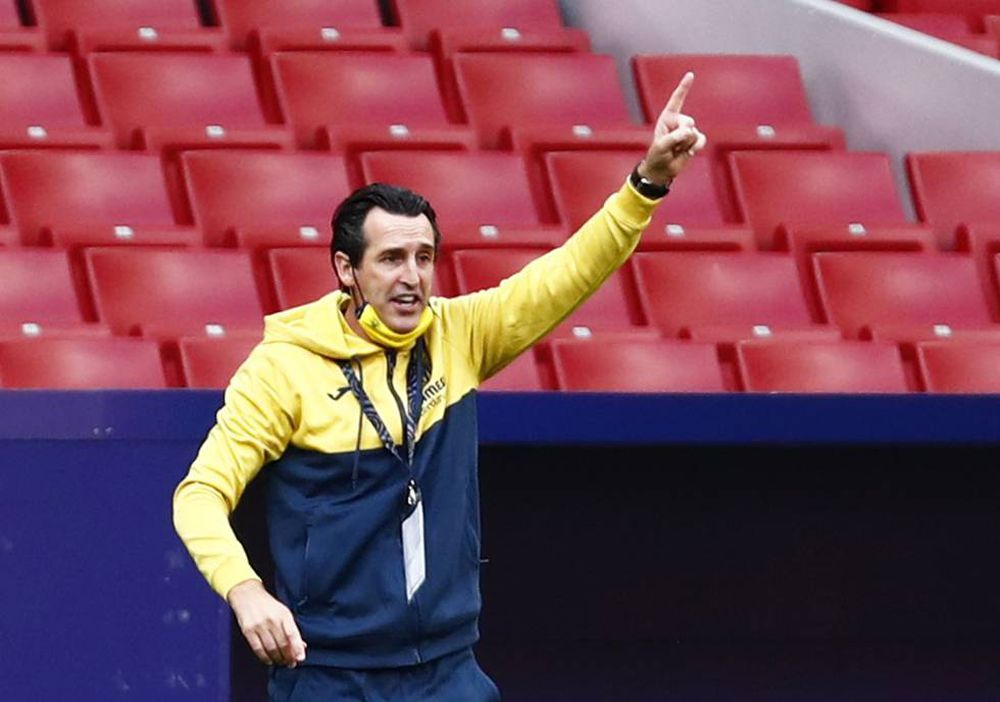 Unai Emery’s voice (Fuenterrabía, 1971) sounds relaxed on the other side of the line. After four years of turmoil on the benches of Paris Saint-Germain and Arsenal, two clubs deformed by existential crises, the Basque coach has found the peace that simple companies provide. Nor branching out of a holding company Based overseas or embassy of a sovereign Persian Gulf state, Villarreal is just a soccer club. This Saturday he receives Real Madrid to test his excellent playing moment.

Question. When you joined PSG in 2016, La Liga was the highest-scoring championship in Europe. Now he is the one with the fewest goals per game.

Reply. Everything influences. The lower economic capacity made Neymar and Cristiano leave and the League went down the step. Barça and Madrid are betting on young people who may possibly take over, but they need time. And let’s not forget that Madrid’s investment in Hazard can only be made by the five richest clubs in the world; and that Barça reinvested Neymar’s money but did not find a clear reference: neither Dembelé, nor Coutinho nor Griezmann are in the ‘top five’ of the world, like Neymar, Messi and Cristiano. The second most watched league in the world was always the Spanish one because the best football was played here. For this to continue being the case, we have to be able to generate a game where things happen. Statistics tell us that we have work to do.

P. Why do less things happen in League matches than in Serie A matches?

R. The orderly football we see has to do with the message of keeping a clean sheet. The opposing goal is looked at with caution. That message has penetrated. The other extreme, that of beautiful, attractive matches, with both teams looking at the goal, transmitting energy and uncertainty for 90 minutes, goes against the organization. In Spain coaches are very organized, very tactical and competitive. And that’s like the short blanket. It gives us a richness and takes us away from spectacle football.

P. Without an audience, do middle-class players shine more than the big players, who are usually the most exhibitionists?

R. Can be. But Madrid came back to Barcelona playing in Valdebebas, without an audience and with great regularity. Without making great matches, yes.

P. He belongs to a guild of vain people who boast of not doubting. Do you doubt yourself?

R. I do not think it is like that. I try to be natural. Live my profession with passion and responsibility. It is very difficult when you are recognized and can be loved or hated. You need a very high emotional balance for both. Because where they love you a lot, they will love you little. When I was at Sevilla, Betis didn’t want me, and so on. We all like to be loved and sometimes we don’t know how to handle that.

P. There are coaches whose ego prevents them from making a correction, a self-analysis. Why does it seem to you that reviewing your decisions does not affect you personally?

R. I am very practical in my search. All my experience and knowledge I channel to be competitive. How do you become competitive? Starting with the human. Coaches live on the edge of winning or losing. If you are not capable of giving something more than professionalism, the footballer will not be able to give you everything because for him you will be a throwaway product. But I have never considered whether or not I have doubts. Having different paths before you generates doubts, but they are positive doubts because they are solutions. I don’t think I’m a worse coach because after two years at PSG I didn’t achieve the maximum goal, which is to win the Champions League. That is natural. I get it. The bottom line is that a coach has to have his site very well established internally.

P. In what sense?

R. The president is the boss. And for the players, the boss is the coach. If the players have access to the president and they are not clear about the coach they have to pay attention to, my functions are weakened. In some places I have had problems for this. In others, the positions have been very clear. This has to do with leadership. Florentino Pérez is the most visible leadership in Madrid; At Atlético you find that leadership in Simeone; you go to Barça and you meet Messi; and Monchi in Sevilla …

P. And what is the ideal leadership?

R. I tell the players: “You are the most important.” When the player has power, vis-à-vis the outside, the president or the sports management, the club and the fans, and also knows how to manage it, that is magnificent. But it is very difficult to achieve. Messi has been a leader who has known how to exercise that power. But I have also come across cases where players have a damaging power because they use it for their own benefit. I started to see it at Lorca.

R. At PSG the president respected the players a lot. And he gave them affection. But he always said that I was the boss. I was telling him in front of me and individually. That drive is vital. Whoever has the power, for the system to work they must know how to manage it. The best organized clubs are the ones that best design those responsibilities.

P. La Real, Sevilla, Granada and Villarreal are the teams that are playing the best in the League. All from 4-3-3. But you started out with a 4-2-3-1 double pivot with Parejo and Coquelin. Did the doubts help you change?

R. I am expanding my knowledge and now I try to talk with my assistants to use the resources in the best possible way. Because I have ever been wrong. Because you see that a player acts in a position with some comfort and sometimes we think we find him another place thinking that they can better exploit his qualities, but if you insist on security or a sense of confidence and wanting to repeat it, it goes wrong. It has happened to me. What I try now is to use the players in the place where they develop best. My priority is that this development takes place especially when they have the ball, and then we will get into position when we don’t have it. In Lorca I started playing 4-4-2 because I had two good points, the following year I went to 4-3-3 because I had a midfielder from Barcelona, ​​which was Xavi Moro, and I learned a lot by watching him. In Valencia we had a playmaker like Silva, a forward like Villa and two bands, so we did a 4-2-3-1 because the players were comfortable in that system. And then at PSG I developed the 4-3-3 again with Thiago Motta, who did a role that I loved. The day we beat Barça 4-0 in Paris (for me the famous and good game is that, not the one we lost 6-1) we played a brilliant game from 4-3-3. And at Arsenal, once again I met a player who conditions you a lot, who is Özil, and you have to put him behind the striker in a 4-2-3-1 …

P. And at Villarreal?

R. I have found again an idiosyncrasy in the club, a philosophy of touch players. That is why I want to build from the ball with a single midfielder that provides balance. To be competitive is to adapt to the circumstances and from there develop football. And it is true that Real are playing very well, starting from positioning themselves with the ball as a priority. Because when Real loses the ball you see a 4-4-2. We also. With Gerard and Paco Alcácer as references above. Gerard is neither band-band nor tip-tip, but he performs very well between wing and wing. So we try to make our game with him from there, and when we lose the ball we form a 4-4-2.

P. Iborra in the quarry of Levante played as nine. He was always an arriving flyer. Now you have discovered him as a midfielder. At 32 years old! As it did?

R. Because he is very smart. He has learned to move in that area by giving the team what it needs: easy passes, support for those above, knowing how to look for superiorities with the goalkeeper and the centrals when the rival presses, prevail in the aerial game, win the lateral centers when he gets in between the center-backs … He worked on his shortcomings: positioning, knowing how to orient himself to pass forward, when his back is turned, knowing how to lean or avoid participating so that the next ones play because another teammate comes in pressure … He is learning!

P. Does playing with a single pivot help the spaces to be distributed more elastically?

R. We have a growth process starting with making the team play positionally to pass and break lines. We insist a lot on identifying the spaces where each one is and how to win new spaces. Sometimes there are spaces to give many passes and sometimes to give less and be more vertical. We are trying to improve the reading of what each moment requires.

P. How do you see the greats?

R. I think Atlético is playing well with a system that is not 4-3-3. He is the most regular of the candidates to win the League. Madrid and Barça are being irregular when they do not find the maximum motivation. The problem with big teams is the management you make of the efforts between the League, the Champions League and national teams. This management of rest when footballers rotate is as important as the management they do when they are dosed on the pitch. Players regulate efforts against inferior opponents because they consider that even without going to the maximum they win. I don’t like the handbrake. That is why Barça and Madrid are irregular. It happened to Madrid with Cádiz and to Barça with Getafe. Simeone’s teams never go at half throttle.

P. Are you expecting a lesser Madrid?

R. After having lost with Valencia, I think they are going to come plugged in. I wait for the best Madrid. With the best possible eleven doing maximum efforts for 90 minutes. They are no longer there to manage the effort.

P. Considering this Madrid, what is more damaging, letting the projects run out without signing or signing the wrong players?

R. The players’ commitment is with themselves. I put examples: Cristiano, Ramos, Piqué … and in my team Iborra or Albiol. They are responsible players to the maximum with their profession. They are the most necessary models. Because you still see a lot of players who are 50% committed to themselves. They live more outside their profession than is recommended. Today you have to dedicate 24 hours to football. You train even at home.