UEFA is investigating the “tunnel events”! 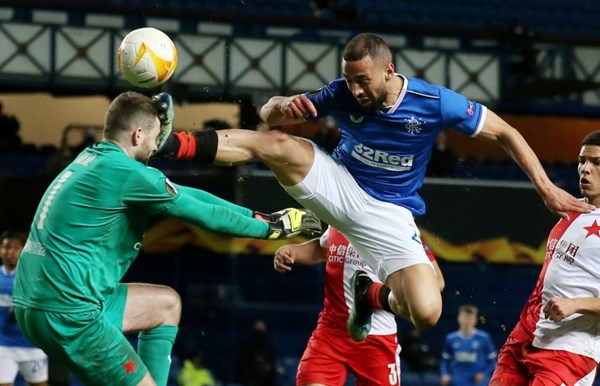 Rangers striker Kimar Rove was subjected to a racist insult on social media, after he was sent off for interfering with Slavia Prague goalkeeper Andre Kolar during the match in which the players of the two teams also clashed in the tunnel after the match.
Slavia said his guard had suffered a severe head injury as a result.
UEFA said it was aware of what happened between the players of the two teams in the tunnel, and that it was awaiting further information from match officials before commenting.
Steven Gerrard, coach of Rangers, UEFA, called for action after his player Glenn Camara complained of being racially insulted by a Slavia Prague player during a 2-0 loss in the European League on Thursday.
Camara was angry after Ondre Kudla whispered something in his ear and spoke to him while placing his hand on his mouth, which led to a quarrel in the final stages of the match.
The Scottish champion completed the match with nine men after Kimar Roveh and Lyon Balogun were sent off, leaving the competition with a 3-1 aggregate loss.
“My player told me it was a racist insult,” said Gerrard. I feel angry … I know Glenn and I trust him 100% and it is very disappointing, if I want to speak to you on the field, why put my hand on my mouth or whisper in your ear?
He added: It is up to UEFA now, and I hope it will not be overlooked.
Slavia denied the allegations and said in a statement that Camara assaulted Kudla after the match, and the defender made clear that what he whispered to the Finnish player was not a racist insult.