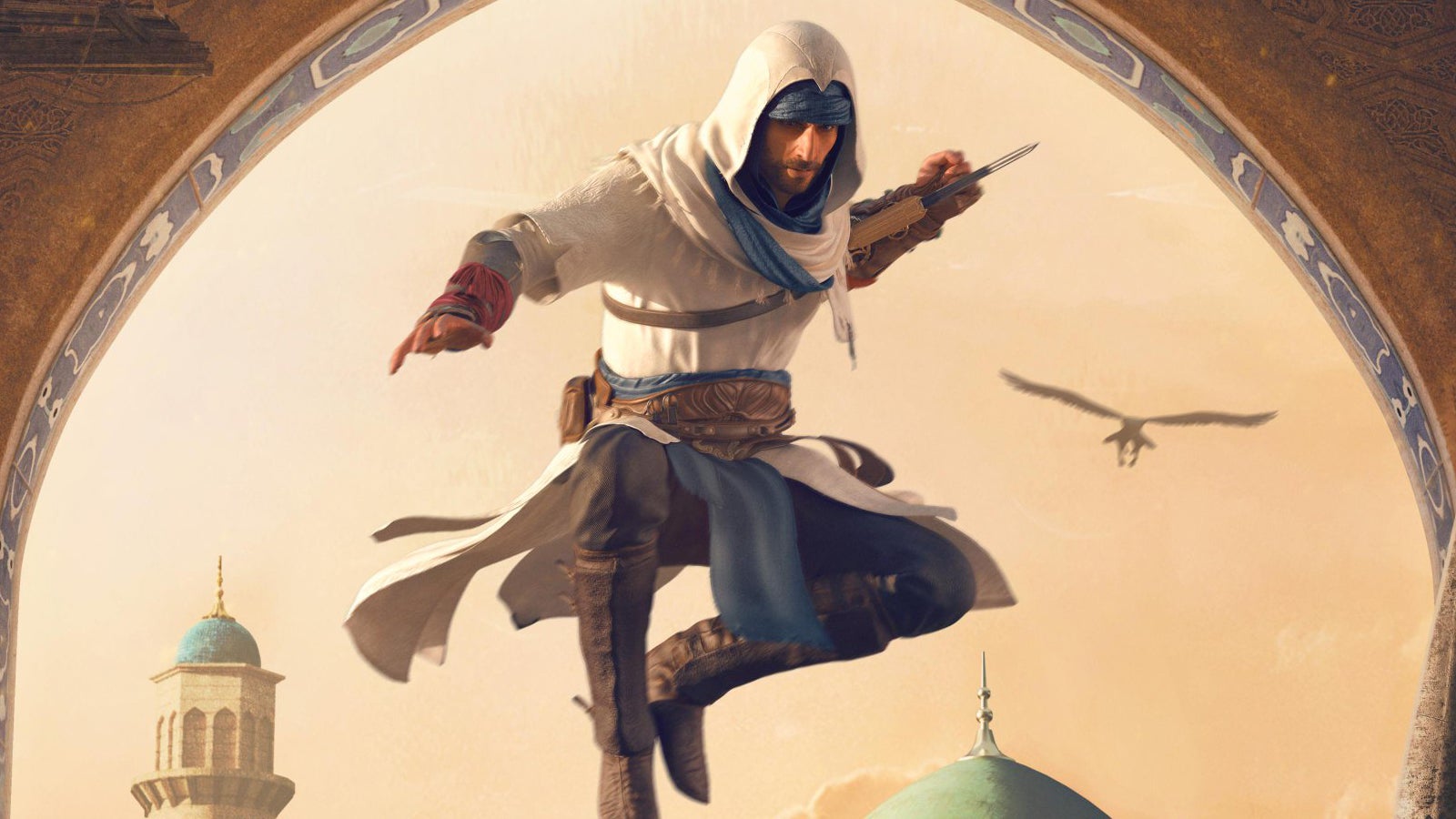 Today’s Ubisoft Forward event has revealed a first glimpse at Mirage, next year’s new Assassin’s Creed adventure – although we’re still waiting for a look at gameplay, and there’s still no firm release date than “2023”.

Still, we now know much more about Mirage than we did through this year’s drip-feed of leaks from around the internet – and from Ubisoft itself. And this week, I sat down with several of the game’s Bordeaux-based development team for a deeper dive into what was shown publicly today. Read on for details of djinn, a popular rumor seemingly being denied, and more details on that Prince of Persia crossover.

Mirage is set in Baghdad and begins in the year 861, when the city enjoyed a golden age where it was a commercial and cultural crossroads. It was home to all manner of faces from all parts of the known world – a perfect cast for an Assassin’s Creed game – and also, of course, future Master Assassin himself, Basim Ibn Ishaq. When the game begins, we meet Basim several decades before his journey to England and arrival in the story of 2020’s Assassin’s Creed Valhalla. Here, on the streets of Baghdad, Basim begins as a petty thief, who catches the eye of the Hidden Ones.

Details on Mirage’s story remain thin on the ground, though we’ll play as Basim as he rises through the ranks of the proto-Assassins, and crosses paths with the Order of the Ancients – the group which would, post-Valhalla, become the Templars. The city of Baghdad will offer a linear story over several distinct city districts – which all sounds like classic Assassin’s Creed – but will also give way for trips to Alamut, a mountain fortress where Basim will train (inspired, I was told, very much by Masayaf from AC1). Here, surrounded by the upper echelons of the Hidden Ones, as well as those who support the group’s free-will-inspired way of life, Basim will eventually be welcomed as one of the group’s own.

One such ally will be Basim’s mentor, Roshan, a former Persian slave turned Master Assassin voiced by the unmistakable Shohreh Aghdashloo, who you may recognize from The Expanse, Arcane, Destiny and Mass Effect. But not all is as it seems. Today’s reveal for the game teased characters who may be “more than what they seem”, and anyone who has played Valhalla will know Basim himself holds big secrets – ones he may not yet be fully aware of as Mirage begins.

“I think the most accurate comparison would be Rogue or Revelations, in terms of scope,” narrative director Sarah Beaulieu tells me when I ask what to expect from Mirage’s runtime. “We also wanted to go back to what Assassin’s Creed was in terms of story structure in the very early games, which means that it’s linear. You have a beginning, you have an end, and it’s a character’s evolution.” The news will likely come as a relief to some who never made it through Valhalla and Odyssey’s lengthy campaigns, which encourage playtimes in the hundreds of hours.

Mirage, of course, began life as a shorter even experience – as an expansion for Valhalla, and part of that game’s meaty post-launch expansion programme. But this status for the Mirage project was floating, its developers told me – only a matter of weeks, before its scope was expanded.

“It was supposed to be a DLC for something like four or five weeks,” art director Jean-Luc Sala told me, “and then we realized that if we were going to do Baghdad, we had to do it [properly]. We needed to be a fully-fledged game. That’s where it all started to become what it is now.”

“We wanted to do a full game, and focus on that story even more,” Beaulieu added.

Fittingly, for a time in which the Assassin’s Creed series is celebrating its 15th anniversary, Mirage itself is being billed as a celebration of the franchise’s origins, and a chance to revisit the scale and Middle Eastern setting of the franchise’s roots. Mirage’s gameplay has also been stripped back to the series’ humbler stealth-based beginnings, albeit with choice additions – such as your flying eagle companion – from later entries.

Gadgets such as mines and blowdarts will be available to use, alongside new innovations such as an ability to slow-down time and mark targets to perform multiple stealth assassinations. Your enemies have new skills also, such as the ability to target and take your eagle companion out of play. Mirage’s parkour has also been the focus of improvements, with returning corner swinging and new pole vaulting possibilities. And finally, fans will be pleased to know the game’s main assassination missions will feature the series’ “Black Box” gameplay – where multiple routes and opportunities lie in wait to give you a path to your target.

Baghdad itself is being tuned to be a playground for parkour – and a return to the city-set adventures of old. “It’s not Valhalla, where we lost a bit of the feeling of big, big cities,” Sala said. “It’s optimized for parkour, it’s that kind of density you need jumping from rooftop to rooftop.” But will the series’ crowds also be back – perhaps to the scale of the French Revolution-set Unity? “We are tuning that,” Sala replied. “We have optimized our character technology and appearance, and can generate a lot, but it’s not interesting when there is too much [of a crowd]. So we are trying right now to balance the fun.”

Assassin’s Creed has always balanced historical fact with the series’ trademark dabbling in myths and science fiction – and a mysterious figure spotted at the end of today’s Mirage trailer seems to continue that. Glimpsed while Basim is in a post-assassination scene (the Animus’ “Memory Corridor”), this creature is a djinn, Beaulieu confirmed. “What you saw in the trailer is a well-known creature in the Middle East, a djinn,” she told me. “It’s something Bassam sees regularly. It’s part of his journey of him. It’s something he’s going to discover and understand slowly as the player does. It’s key to his evolution of him as a character.”

Those who have played and finished Valhalla will likely have an idea what this vision of a djinn may ultimately be about – though we won’t get into spoiler territory here. For Beaulieu, it’s a part of Basim’s story that is also reflected in the game’s name. Mirage, she noted, was designed to refer to “both this external setting and this internal conflict – and it’s embodied in that title”.

Speaking of dabbling in non-historical things, eagle-eyed fans will likely have spotted a Prince of Persia crossover possible if you purchase Mirage’s Collector’s Case edition (which I don’t have a price for but looks expensive). Here, you can get a pack of cosmetic items for the game which includes a Prince skin for Basim, plus also for your eagle and mount. (Pre-ordering the game, meanwhile, will net you that leaked Forty Thieves bonus quest.)

“We are in Persia, and Assassin’s Creed’s origins – I’m not talking about the game [Oranges] but the very origins of the Assassin’s Creed history – came from Prince of Persia, which was turned into a new game which was Assassin’s Creed 1,” Sala recalled, explaining the crossover to me. “So it is a homage and tribute to this franchise . That doesn’t mean we are allowed or supposed to announce whatever Prince of Persia is coming next. Obviously that’s not the intention. We are a tribute to our own anniversary and origins by adding this kind of wink to the brand that was here before and we all love.” Here’s hoping fans can get those items separately, without having to shell out for the full collector’s box.

Early leaks for the Mirage project had it pegged as possibly a remake of Assassin’s Creed 1 – and whispers have continued that Ubisoft is planning to use Mirage as a way to eventually re-release a new version of its original stabathon to keep fans busy. On this, Sala seemed certain an AC1 remaster was not on the cards-at least, not from his team. “Yeah that’s not what we’re doing. I’m fully dedicated to Mirage and I can tell you we are not remaking AC1,” is what he told me.

If you’re catching up on tonight’s announcements, the evening was dominated by teases for two blockbuster Assassin’s Creed projects now in development. Codename Red will be set in feudal Japan, while Codename Hexe looks to be inspired by European witchcraft.

Ubisoft also saw fit to confirm a couple of mobile game projects today, including one set in China.

Of course, before all of that, there’s still next year’s Assassin’s Creed Mirage to look forward to, which we have more detail on here.