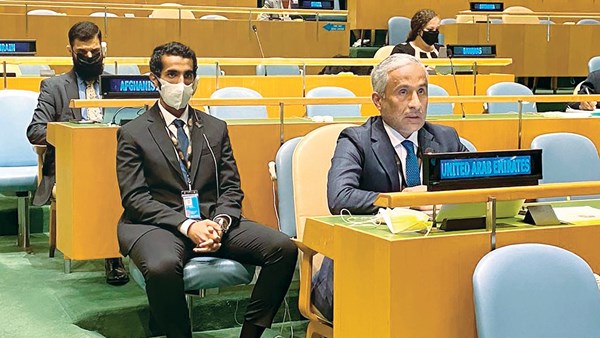 The UAE stressed the need for all countries of the world to cooperate, work and coordinate among themselves in order to activate the mechanisms of joint action to ensure the improvement of the level of operations to address corruption and prevent the spread of all its forms.
This came in a speech delivered by His Excellency Dr. Hareb Al-Amimi, President of the State Audit Bureau, President of the Conference of the States Parties to the United Nations Convention against Corruption, during the extraordinary session held by the United Nations General Assembly at its headquarters in New York from 2-4 June under the title “Challenges and Measures Aiming to Preventing corruption and strengthening international cooperation.” His Excellency stressed that the UAE, like other countries in the world, is concerned about the dangers that corruption brings to the stability and security of societies, and thus supports international efforts to build effective institutions that work to establish the principles of accountability, integrity and transparency, in order to ensure the achievement of development goals. sustainable and well-being of peoples.
Al-Amimi said: “The UAE, based on its belief that corruption stands in the way of development plans and undermines the rule of law, works in cooperation with its international partners, and through the general framework of the United Nations Convention against Corruption, to activate the various chapters of that agreement in a manner that ensures its good implementation and achieving its objectives.”