UAE: Supporting climate action is an opportunity for economic growth 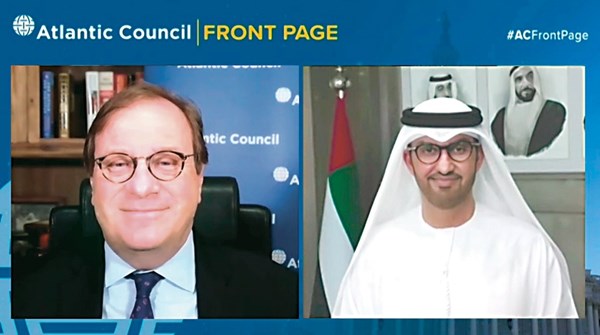 His Excellency Dr. Sultan bin Ahmed Al Jaber, Minister of Industry and Advanced Technology and the UAE’s Special Envoy for Climate Change, affirmed the UAE’s commitment to continuous and ambitious climate action, and the need to focus on transforming the climate challenge into creating economic opportunities.
This came during a meeting yesterday with Frederick Kemp, President and CEO of the Atlantic Council, the American research institution based in Washington, where Al Jaber said: “Through the vision of wise leadership, the UAE believes that continuous and ambitious climate action is necessary and important and constitutes a strong supporter of growth. Economic, and that taking the right steps in this direction will put the world on a new path towards achieving significant low-carbon economic growth. Therefore, we have to deal with the climate challenge as an opportunity that must be taken advantage of. ”
His Excellency pointed out that investment opportunities in renewable energy have become more economically feasible than ever before, pointing to data recently published by the International Renewable Energy Agency (IRENA), which confirmed that the year 2020 witnessed the largest addition in the history of the renewable energy sector, reaching 260 gigawatts. Despite the economic difficulties resulting from the global spread of the “Covid-19” pandemic.
The UAE is taking advantage of this economic reality and its pioneering experience in the field of clean technology to mobilize regional support for climate action in preparation for the twenty-sixth session of the Conference of States Parties to the United Nations Climate Change Convention (COP 26).
His Excellency Dr. Sultan Ahmed Al-Jaber spoke days before the White House hosted the Leaders’ Summit on Climate with the participation of 40 countries, including the UAE. His Excellency stressed the importance of the recent visit of the US Presidential Envoy for Climate Change, John Kerry, to the UAE to participate in the regional climate change dialogue held in Abu Dhabi.
His Excellency said: “This visit gained great importance as it brought together one of the largest oil and gas producers in the world, with the United States, which is the largest economy in the world, as well as one of the main producers of hydrocarbon resources, to form a partnership aimed at transforming climate action into viable economic opportunities. While the UAE and the United States of America have strong and established relations, we are working to ensure that these distinguished relations contribute to supporting diplomatic efforts aimed at achieving tangible results in the field of climate action.
Al-Jaber explained that the UAE will benefit from the experiences it has gained from its long track record of investing in clean technology and renewable energy in 70 countries around the world, and will focus on taking advantage of new opportunities that are economically feasible. Starting from the planning stage until it is completed ahead of schedule and within budget. We are always ready to cooperate with new partners whenever the opportunity arises. ”
His Excellency also referred to the important role that the oil and gas sector plays as a major source of energy in the coming decades, as well as its important role in the transformation of the energy sector.
“Based on these facts, it is imperative that producers focus on reducing carbon emissions in the oil and gas sector as much as possible,” he added. ADNOC has a long history of responsible production operations since its inception fifty years ago. It was one of the first oil companies to adopt a zero-gas policy and the first to implement carbon capture, use and storage on a large industrial scale in the region. These proactive measures helped make the oil sector in the UAE one of the least intense in the world in terms of emissions levels, and emission levels from Murban crude are less than half the average emissions in the global oil and gas sector. We always seek to explore new ways to improve our environmental performance and have adopted a strategy that reduces the carbon intensity of our operations by an additional 25 percent by 2030. ”

New fuels
His Excellency Dr. Sultan Al-Jaber indicated that the UAE is investing in new carbon-free fuels, such as hydrogen. Although the hydrogen market is still limited now, it has a great opportunity to acquire a huge slice of the energy system in the next two decades, and the UAE at that time will be able to become a major supplier of both blue and green hydrogen.
His Excellency added: “At (ADNOC), we can benefit from the infrastructure that we currently possess in the gas sector, and our capabilities to capture, use and store carbon on a commercial scale, in developing blue hydrogen. We are also exploring the potential of green hydrogen through the Abu Dhabi Hydrogen Alliance, which brings together the major players in the UAE’s energy and industry sector. We recognize that the key to developing the hydrogen economy in the future is to align supply with demand, and to develop a value chain that connects suppliers and customers in key markets. Therefore, we are currently studying potential opportunities in the international market and developing a plan to establish a hydrogen system that can provide supplies to both the UAE and the global market. ”

Curfew: unconstitutional or not? Karlsruhe could stop the rule now

Martínez Munuera, this is how Athletic and Barcelona did with the referee of the Copa del Rey final