UAE signs 4 agreements and memoranda of understanding with Uzbekistan 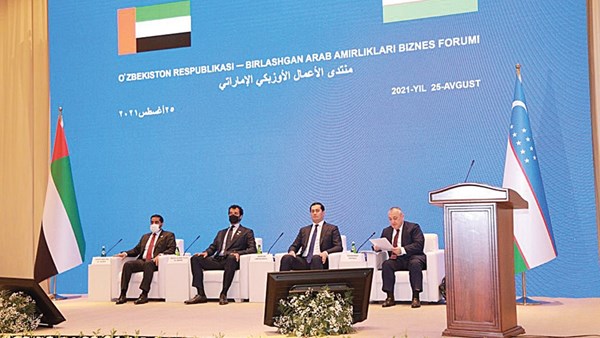 Yesterday, in the Uzbek capital, Tashkent, the UAE-Uzbek Business Forum was held, chaired by His Excellency Abdullah bin Touq Al Marri, Minister of Economy, and His Excellency Sardar Omar Zakhov, Deputy Prime Minister and Minister of Investment and Foreign Trade of the Republic of Uzbekistan, in the presence of His Excellency Jamshid Kudjaev, Minister of Agriculture of Uzbekistan, and Saeed Matar Al Qamzi, Ambassador of the United Arab Emirates In Uzbekistan, with the participation of a high-level official and commercial delegation from the UAE, which included representatives of 19 government and private entities, the forum was attended by more than 100 officials and businessmen from both sides.
The forum is one of the fruits and outputs of the fourth session of the joint economic committee between the two countries, which was held in April 2021 under the chairmanship of His Excellency Abdullah bin Touq Al Marri, Minister of Economy, and His Excellency Sardar Omar Zakhov. The forum witnessed the signing of 4 agreements and memoranda of understanding in the fields of trade and investment between the two countries in a number of Among the vital sectors, including: a memorandum of understanding to establish a joint business council between the two countries, a memorandum of understanding on the accession of Uzbekistan to the global logistic passport program launched by the UAE, a memorandum of understanding on economic cooperation between the two parties, and an investment agreement for a joint project in the field of agriculture in Uzbekistan. The forum’s activities focused on developing cooperation between Emirati companies and their Uzbek counterparts, inviting them to invest and trade cooperation in a number of sectors and economic activities.
His Excellency Abdullah bin Touq stressed that Uzbekistan is a major partner of the UAE in the Central Asian region, and they are united by bonds of brotherhood and common cultural and civilizational affiliation. priority within the interests of the two countries, stressing the UAE’s keenness to develop this partnership to higher levels, and expand its scope to include new areas that serve the future development plans of the two countries.
His Excellency added: “The UAE-Uzbek Business Forum provided a very important platform through which we put forward joint plans between the two governments for future paths of cooperation, especially with regard to increasing trade exchange, diversifying the basket of goods and services on which the two countries’ trade is based to include new activities and products, and stimulating bilateral and mutual investments. In the markets of the two countries, creating direct channels of communication between the companies of the two countries, and providing them with the opportunity to agree on investments and projects with promising prospects during the next phase, especially in the fields of agriculture, energy, tourism, dry port operations, logistical support, aviation and small and medium enterprises.
His Excellency Sardar Omar Zakhov stressed the strength and strength of the bilateral relations between the UAE and Uzbekistan, as the two countries have taken important steps in supporting and strengthening economic relations at the trade and investment levels, during the past years, noting that the UAE-Uzbek Business Forum showed promising opportunities for further expansion of the volume of exchanges. Trade and investment partnerships between the two countries. His Excellency said: “Our strong relations have created a solid foundation for rapid development and cooperation between private investors and businessmen from both sides, and we are ready to support Emirati investors in taking advantage of the available opportunities and developing their businesses in Uzbekistan.”
The forum presented new action plans to develop the frameworks of economic partnership during the post-Covid-19 phase, and to increase trade exchange, with a focus on facilitating the access of Emirati exports to the markets of Uzbekistan.

Trade and investment exchange
The UAE is the first Arab trading partner for Uzbekistan, and accounts for more than 50% of its trade with Arab countries. The value of non-oil foreign trade between the two countries amounted to about 400 million US dollars (1.5 billion dirhams) during the past year 2020.
The volume of mutual investments between the two sides amounted to more than 3.8 billion US dollars, 97% of which are Emirati investments in Uzbekistan, and include a number of vital sectors, such as real estate, wholesale and retail trade, transport and storage, and professional, scientific and technical activities.