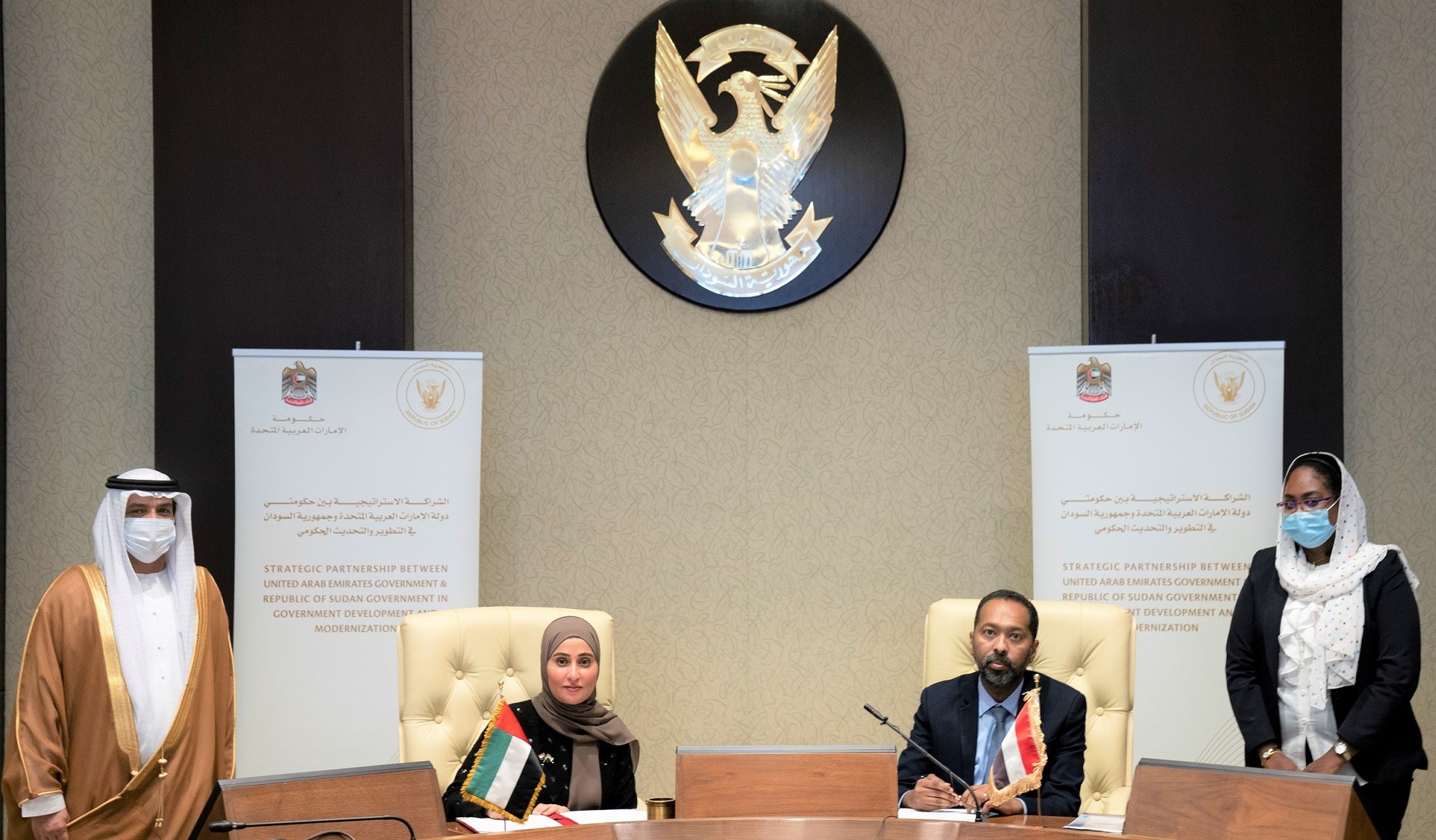 The United Arab Emirates and the Republic of Sudan launched a strategic partnership in government modernization, as part of the joint efforts between the two countries to enhance cooperation and exchange experiences and knowledge in various fields, for the benefit of the two countries and their brotherly peoples.

Dr. Abdullah Hamdok, the Sudanese Prime Minister, participated in some of the bilateral meetings, where he welcomed the delegation of the state, stressing the depth and excellence of the relations between the two countries, and appreciating the UAE’s support for Sudan and its significant contribution to addressing Sudan’s return to the international community and to the international development community.

This came as part of an official visit by a delegation from the UAE government to the Republic of Sudan, headed by Ohoud bint Khalfan Al Roumi, Minister of State for Government Development and the Future. Expanding the circle of cooperation and exchanging knowledge and experiences in the areas of government work, and witnessed the signing of the strategic partnership agreement in government modernization, through which the two sides will work to share expertise and knowledge to develop government work in various fields.

The UAE government delegation held a series of meetings with senior officials of the Sudanese government, during which they reviewed prospects for cooperation in the areas of government modernization, and discussed future opportunities to launch joint projects, ways to strengthen bilateral frameworks, and exchange experiences in areas of common interest.

Hamdok: We aspire to a strategic relationship based on bilateral cooperation with the UAE

The Sudanese Prime Minister expressed his admiration for the UAE’s experience in the field of government work, stressing Sudan’s desire to benefit from it, and noting that the bilateral agreement between the two countries will contribute to the development of a program to assist the government in addressing the civil service as one of the biggest transition challenges that require treatments that help create A professional civil service that can perform the role required of it in implementing plans and programs in a scientific and systematic manner.

Ohoud Al Roumi: The partnership embodies the leadership’s directions by consolidating the cooperation model to enhance the development process

Ohood Al Roumi stressed that the UAE government, under the directives of His Highness Sheikh Mohammed bin Rashid Al Maktoum, Vice President and Prime Minister of the UAE and Ruler of Dubai, “may God protect him”, is focusing on strengthening joint cooperation with the governments of brotherly and friendly countries, as part of its efforts to consolidate distinguished and constructive partnership relations aimed at strengthening development process.

Ohood Al Roumi said that the partnership with the Government of the Republic of Sudan reflects the depth of the brotherly relations between the two countries, and their keenness to reach advanced stages of joint work, constructive cooperation and the exchange of knowledge and experiences, to serve the interests of the two countries and their brotherly peoples.

Khaled Omar Youssef: A practical step for exchanging experiences with brothers in the Emirates

His Excellency Eng. Khaled Omar Youssef, Minister of Cabinet Affairs in the Republic of Sudan confirmed that Sudan is witnessing one of the practical steps in the path of openness and the transfer of mutual experiences with its brothers in the region in general and especially with the United Arab Emirates, with which relations extend for several decades, explaining that the road has become paved. In order to build a relationship based on the exchange of experiences, cooperation and joint integration for the benefit of the two peoples.

The Sudanese Minister of Cabinet Affairs announced that the memorandum of understanding came as a result of a long stage of joint work between the two working teams in the two ministries of Cabinet Affairs in the two countries, noting that the areas of cooperation will include the exchange of expertise, experiences and best practices in the field of government services and projects such as programming, smart services, government performance and excellence. Strategic foresight, planning, training and any other areas to be agreed upon.

Tayseer Al-Noorani: The memorandum of understanding is an important step to strengthen cooperation between Sudan and the UAE

For her part, His Excellency Tayseer Al Nourani, Minister of Labor and Administrative Reform in the Republic of Sudan, stressed the endeavor to benefit from all experiences in the field of government development, and from the distinguished government experiences in the UAE, stressing the importance of cooperation in the areas of performance management for national indicators related to the extent to which the state’s vision is achieved and the evaluation of the state’s vision. Government efforts in achieving national priorities and managing performance indicators of government enablers related to customers, human and financial resources, and indicators of the smart and e-government strategy.

She stressed that the memorandum of understanding represents a very important step to enhance cooperation between the two countries, expressing her hope to sign more memoranda of understanding, programs and operational plans.

The outputs of the official visit to Sudan constitute an extension of the historical relations between the two countries, which were established by the late Sheikh Zayed bin Sultan Al Nahyan, may God have mercy on him, and whose development is continued by His Highness Sheikh Khalifa bin Zayed Al Nahyan, President of the State, “may God protect him”, and His Highness Sheikh Mohammed bin Rashid Al Maktoum, Vice President and Prime Minister of the UAE and Ruler of Dubai, and His Highness Sheikh Mohamed bin Zayed Al Nahyan, Crown Prince of Abu Dhabi and Deputy Supreme Commander of the Armed Forces, and built on the outcomes of a series of mutual visits that witnessed the signing of agreements and memoranda of understanding in many development fields related to common interest.