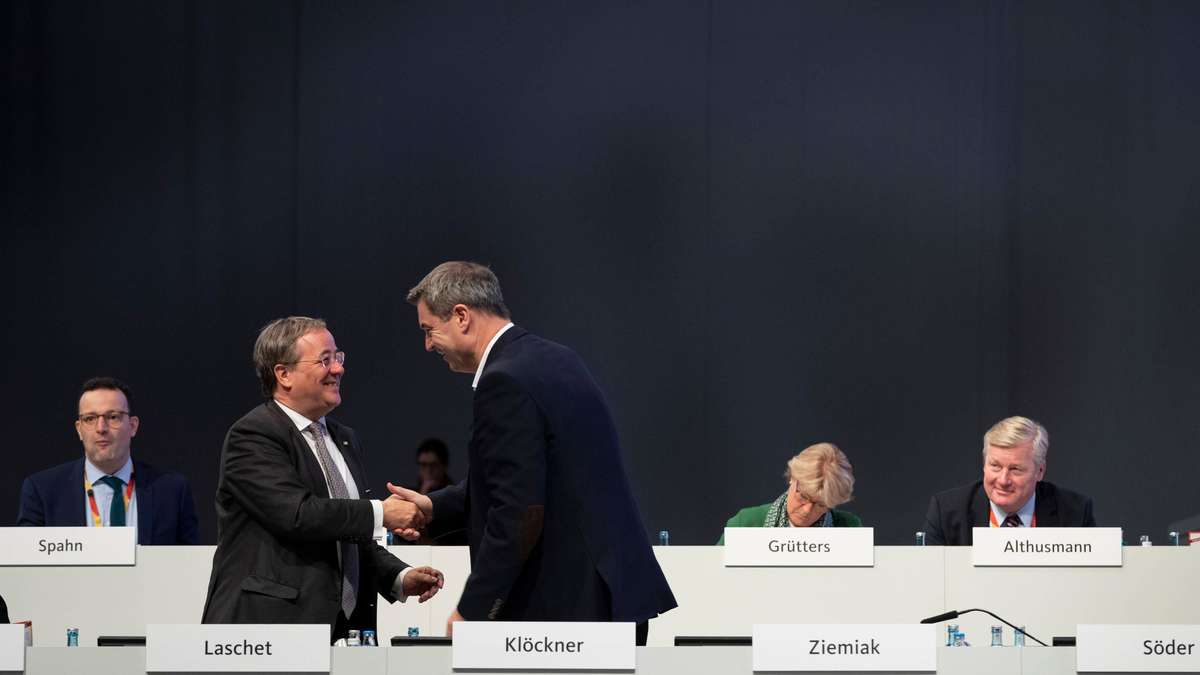 There was no shortage of cheers on the first election day of the super election year. But if you take a closer look, the situation is precarious for everyone in Berlin – and especially for the Union.

Mainz / Stuttgart – The super election year 2021 has begun – with a double debacle for the CDU. The voters in Baden-Württemberg and Rhineland-Palatinate opted primarily for familiar faces and continuity. Now, of all things, one party is under particularly great pressure that, with the best of intentions, cannot deliver continuity in the year of the federal election and the departure of Chancellor Angela Merkel (CDU), at least not in a positive sense: The Union.

But from a national political perspective, surprisingly, there were no real winners on Sunday anyway. The start of the so eminently important election year – on closer inspection it turned out to be a warning for everyone involved. An overview of the findings of election day from the perspective of the parties:

The CDU top candidate in Rhineland-Palatinate, Christian Baldauf, remained diplomatic: In view of the mask affair in the final spurt of the election campaign, some things got in the way, “which didn’t give us any tailwind,” he judged. The lobby disaster was perhaps even the smaller problem: Apparently, many postal voters had already voted before the scandal became known – and Rhineland-Palatinate recorded a nationwide record of postal voters.

The CSU then quickly referred to another problem: Corona management in the federal government. It was there that the CDU suddenly came across, among others, Health Minister Jens Spahn and Head of Economic Affairs Peter Altmaier to personify the failure. Interestingly enough, state group leader Alexander Dobrindt and general secretary Markus Blume even contradicted each other in their election analysis.

“We have to get back on the road to success and that means solve the current challenges and present a reform plan for Germany,” explains Dobrindt Augsburger Allgemeine. Now, in the fight against corona, quick successes are needed, explained Blume, too, but did not even think of far-reaching new plans: “The strategy is not wrong, but the implementation is bad.”

Söder and Laschet: Union blooms chancellor dilemma under high pressure – CDU and CSU both hang in the mask disaster

In any case, the question remains unanswered as to whom the pointer to Berlin should hit. Both potential chancellor candidates, Armin Laschet (CDU) and Markus Söder (CSU), are on the one hand far away from the Bundestag and its lobby scandal, even the Union parliamentary group put responsibility for the “individual cases” Löbel and Nüßlein – indirectly, the Union exposed its power vacuum , as well as the Munich Mercury commented. At the same time, Laschet and Söder hang equally in the mask disaster through their ex-party friends. A difficult starting position for the now dawning squabble about the candidacy for chancellor.

Blum’s CDU counterpart Paul Ziemiak justified the election flop, by the way, in addition to the mask affair, with problems on the ground: There was no change in mood in either country, during the crisis people trusted the heads of government. Rhineland-Palatinate showed that it may not be that simple after all. Here suddenly the free voters jumped into the state parliament. Without any state government office. And probably with the help of some of the CDU’s swap voters. After all, Aiwanger Bündnis felt like the winner of the evening.

There was, however, at least a superficial cheering mood among the Greens. Winfried Kretschmann got the third record result for the eco party in a row. “We take that as confirmation that our course of rational optimism is correct,” said party leader Robert Habeck on the broadcaster Phoenix – and spoke of a tailwind and a “super start”. The Federal Greens had recently shown themselves to be pragmatic and supportive of the state, for example with a willingness to make greater defense spending.

But initial election analyzes clearly showed that the main success factor was the “black green” Kretschmann – probably despite and not because of his party membership. 80 percent of the people in the “Ländle” praised his government work in a survey. With his course, which is idiosyncratic for the Greens (in the TV duel, CDU candidate Susanne Eisenmann even rebuked for too lax policy towards the auto industry), Kretschmann is a solitaire in the party. And if you needed a damper: In Rhineland-Palatinate, the Greens didn’t even get ten percent. Too little for a party that avowedly wants to go to the Chancellery.

There was also joy in the SPD. The number of electoral defeats of the party is long. Now there was a victory: In Mainz, Malu Dreyer remains at the helm for the SPD, the election result of the Social Democrats at least remained constant – and at around 36 percent more than twice as high as the polls in the federal government. Country chief Roger Lewenz found it “sensational”. What resonated in the statement: The social democrats in the federal states have not received any tailwind from Berlin for a long time.

Nevertheless, the endeavors of the Social Democrats on election evening to induce a momentum for change, also in Berlin, were palpable. “There are majorities beyond the Union,” emphasized Secretary General Lars Klingbeil on Sunday evening. The signal for the federal government is: “The race is open.” What was meant was the traffic light, which is a specific variant not only in Rhineland-Palatinate but also in Baden-Württemberg. “It is very clear that an option has become visible today,” said Vice Chancellor Olaf Scholz at “Anne Will”.

However, there is currently no majority in favor of a traffic light in the federal government. And the SPD was also painfully shown that Mainz was not about a general SPD upswing, but about the popular pragmatist Dreyer, who is close to the people. In Baden-Württemberg, the Social Democrats landed at around 11 percent.

State elections in Germany: No winners in the year of the federal elections – the Union has bad suspicions

In the end, the first super election day in the super election year turned out to be the triumph of two popular country leaders. Possibly because of Corona and the longing for stability, perhaps because of the general loyalty to the government of the people in two countries, in which in the past around 70 years the party color in the state chancellery has only changed once – from the CDU to the SPD or the Greens. And certainly because of Kretschmann and Dreyer. Political scientist Lothar Probst spoke of a “prime ministerial democracy” in the federal states in Phoenix, thereby further devaluing the jubilation of the federal parties.

For this reason, too, the results remain at least ambiguous for almost all those involved. Even the AfD, which lost around a third of its votes in each of the two countries, was nevertheless able to look forward to the establishment in the two parliaments with understandable arguments. Only at the Union is the tree on fire: the results could still have been unduly friendly and are still devastating. In Baden-Württemberg, the government is threatened with an immediate end – Kretschmann has other options, possibly even green-red.

The four main problems faced by the sister parties cannot be dealt with reliably: What is needed is an end to the misery of corruption, an answer to the lack of planning in coping with the coronavirus, a decision in favor of a strong candidate for chancellor – and a strong idea about Merkel, who will soon disappear. Replace Bonus. In addition, there is now a bad suspicion in the world. If the poll trend continues, it is possible that the federal government will govern without a union, warned Laschet’s ex-competitor Norbert Röttgen in the evening. After the start of the super election year, one can at least say: At least as unthinkable as it was a few weeks ago, it is no longer. (fn)

At the bottom: sick in traffic

When Truman Capote was a father