Two centuries of history and literature burned in Cape Town 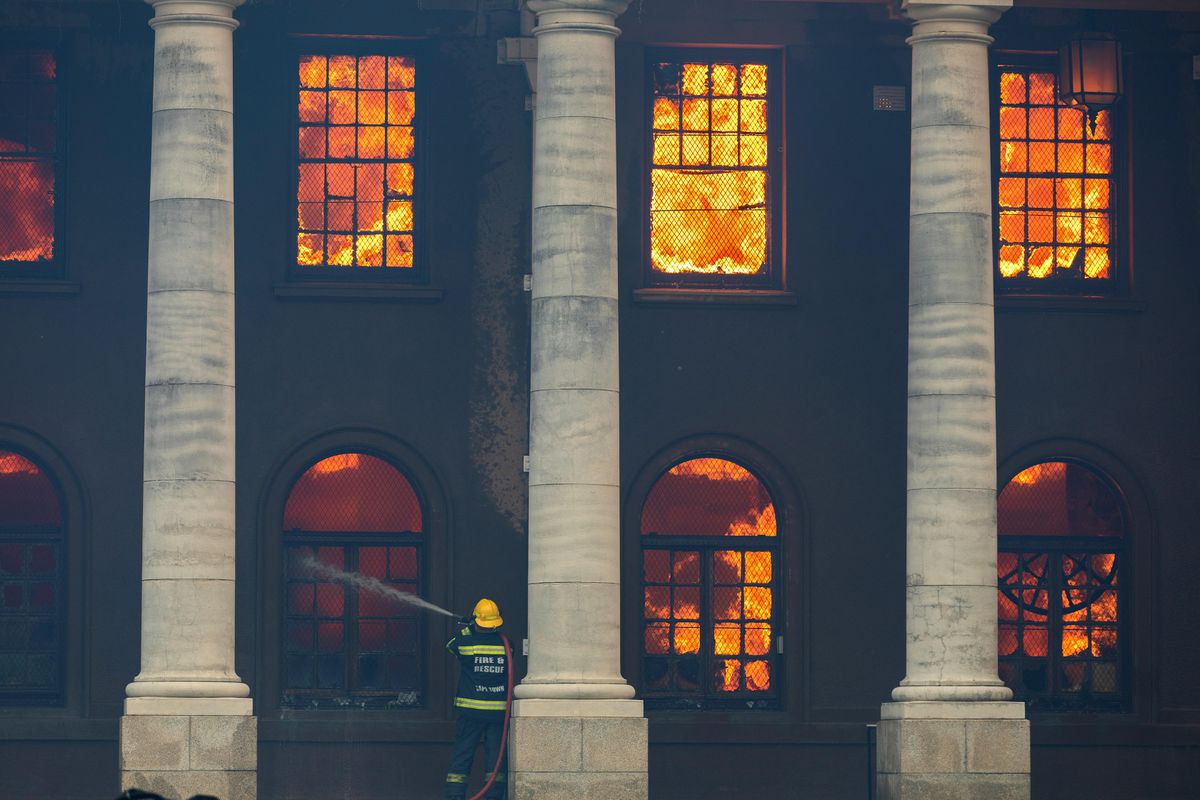 They total more than 65,000 volumes, 26,000 brochures and posters, 3,000 African films, 20,000 audiovisual pieces, thousands of manuscripts and even sound files … Much of the collection of the Jagger Library, in the heart of the South African University of Cape Town (UCT), has been reduced to ashes and another large selection, damaged and at risk, due to a forest fire that occurred this weekend in Table Mountain, the mountains of the homonymous national park.

Academics and historians of the African continent are in mourning because, as the executive director of the Library, Ujala Satgoor, lamented, a “unique African collection in the world.” Although she prefers to be cautious and wait to see what material can be rescued, she acknowledges in an interview with Reuters that the loss is “devastating”: “I feel deep sadness because some things are irreplaceable”. Among the rubble, manuscripts and maps, historical posters, investigations against apartheid, doctoral theses and even watercolors of flora and fauna since 1881, painted by indigenous people are today ashes.

Nombuso Shabalala, a member of the UCT team, also does not dare to calculate the damage and the pieces that cannot be recovered. But remember the strong wind that fanned the fire and how at least four rooms of the educational center were filled with flames. “It is a pity that the most affected is the one who kept that special treasure”, ditch. Likewise, he assures that both the local authorities and the university met yesterday to study the losses and come up with a reconstruction plan.

Mamokgethi Phakeng, the Vice Chancellor, has tried to be positive, in the press releases published on the UCT official website: “We cannot replace the treasures we have lost, but we can create new ones. Each of us can give a new meaning to the purpose of this enormous tragedy ”.

It all started with a forest fire – which the authorities believe was caused – this Sunday on Table Mountain (Table Mountain), the summit that dominates Cape Town, in the extreme south of South Africa and little by little it was gaining ground between the city, according to official sources of the emblematic Natural Park. The flames partially shook the neighboring restaurant and reached several buildings of the University of Cape Town (UCT), founded in 1829.

The director of the Jagger Library warns that by extinguishing the fire with tons of water, the two basement floors, in which countless works are also kept, “are in danger”

In particular, the Jagger Library, which housed more than 1,300 collections and about 85,000 books on the history of Africa; unpublished works, manuscripts with hardly any copies and books on the independence of various countries on the continent. “We have lost an incalculable inheritance.” This was regretted yesterday by Somadoda Fikeni, historian and political scientist, in an interview for Newzroom Afrika. “Fire has undermined Africa’s effort to document its history.” Satgoor warns in the same medium that by extinguishing the fire with tons of water, the two basement floors, in which countless works are also kept, “are in danger.”

Without yet mentioning the losses due to the fire (of which there is still no count), on the Library’s website you can read about the latest publications and news, one of them, a guide to follow the Special Collection of manuscripts, which has “original research material related to the political, social, cultural and economic history of South Africa”. These archives deal with a wide range of subjects (art, music, education, literature and language, botany, politics and architecture) and include multi-format records. Among them are “private documents of personalities, which represent an important record of the social history of southern Africa, and others of communities not usually represented in archives.” In addition to, they list, corporate material of NGOs, companies or institutions; personal and research works of UCT academics; collections of prominent South African architects; registry books of ethnic and religious communities; handwritten scores by South African composers; union records; sound archives with the oral history of South Africa and other social, historical or cultural movement materials …

A fire on a nearby mountain reaches the prestigious University of Cape Town. The flames devour its African library, which houses books, documents and films of incalculable historical value, a common heritage of humanity. A tragedy. pic.twitter.com/hbks8p7Ptw

“For security reasons, the campus will remain closed and no one will be allowed access, except the emergency services,” the UCT reported this Tuesday via Twitter, adding that the 4,000 students evacuated on Sunday have food and most they have been rehoused in hotels.

Social networks have been the main source of communication between authorities and other victims. Many of the residents and academics regret that this fire does not have the same repercussions that the Notre Dame Cathedral in Paris had in mid-April 2019. Remember the sadness when Notre Dame caught fire? These things happen and are ignored because it happens in countries that are not white or European ”, dictates a tweet. The journalist John Simpson criticizes in another: “Imagine the repercussion of a story like this if it had happened in California.”

The terrifying scene in Cape Town, as a conflagration sweeps across Table Mountain & destroys part of UCT’s priceless library. The international press scarcely seems to notice it. Imagine the coverage it’d get if this was happening in California or NSW. #CapeFire pic.twitter.com/QV4ogrvrcK

Despite the limited media coverage, a group of academics has already started a campaign among international experts and professors who have participated in the complete collection or have used it in their studies and research to recover any photocopy or photograph of the material that the library guarded that they could have in their hands.

The fire, which burned five firefighters during the extinction, has not left anyone dead, according to the Cape Town City Council. Mayor Dan Plato has described the fire and destruction, so far, of 400 hectares of vegetation in Table Mountain National Park, as one of the largest and most devastating in recent city history. In its extinction, more than 250 firefighters worked since Sunday.

“We continue to monitor (the situation) because there are possibilities of new outbreaks. This does not mean that the fire is over, “he declared on Tuesday to the News24 information portal firefighter Arlene Wehr, head of the rescue operations service in Cape Town. According to local authorities, residents of the suburb of Vredehoek were evacuated in the early morning as a “precautionary” measure after the flames spread into this residential area from Devil’s Peak, a characteristic peak of Table Mountain.

Remember your sadness when the Notre Dame was on fire? this kind of thing happens and how often it is ignored because it’s happening to non-white, non-European landmarks & structures

The Park’s fire manager, Philip Prins, said the fire could have been started. A man in his thirties was arrested on Sunday night in connection with the incident, said the Head of Security of the Cape Town City Council, Jean-Pierre Smith, who reiterated that it is still being investigated. According to his statements to the radio station Cape Talk local radio, the man – who was arrested near the scene of the events – would have confessed to the agents that he was the author of the fire. “This will now be part of a criminal investigation and, if convicted, there will be substantial consequences for him,” added the official, who encouraged potential witnesses to speak.

WarnerMedia to merge with Discovery to compete in streaming market